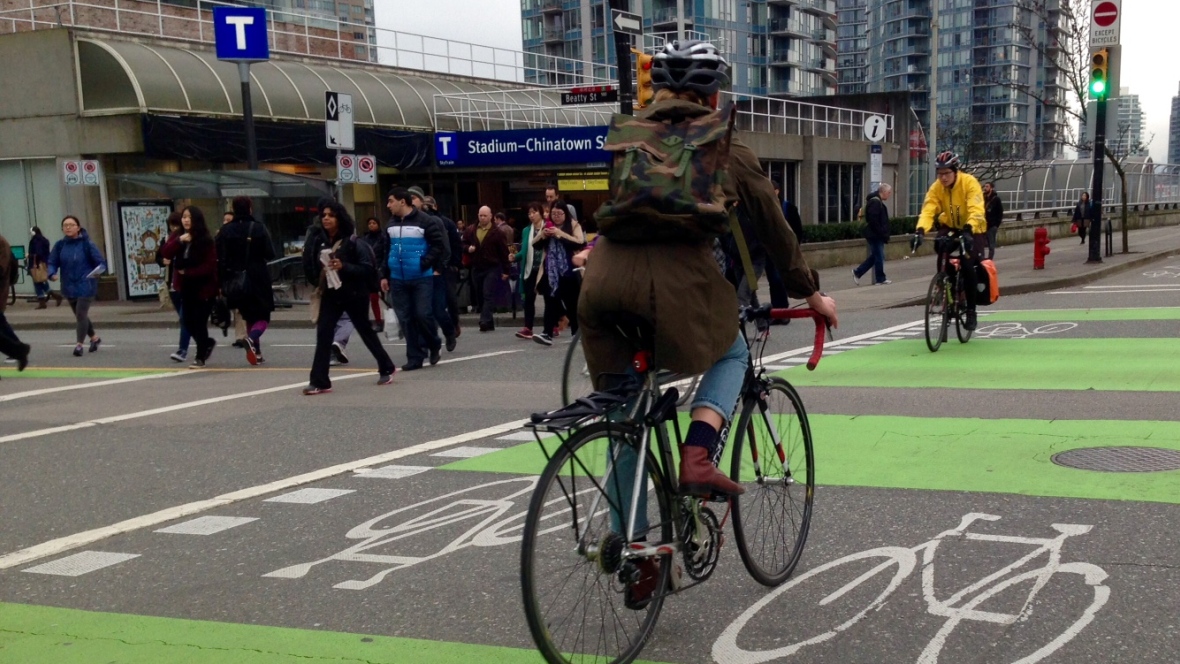 A report released this year, says Vancouver is heading in the right direction with the densest network of cycling infrastructure, the lowest crash rate and the highest number of cyclists of any city in Canada, as well as many other major cities in North America.

New bike lanes in the city have caused heated debate between cyclists and local residents in the past, but this report’s lead author says investing in cycling infrastructure has paid off.

Vancouver also has the most bike shops per capita, with five for every 100,000 residents.

The Burrard Bridge bike lane is the busiest in the city, with 195,000 trips recorded last July according to data from the City of Vancouver.

“New bike lanes in recent years have encouraged people to cycle as a mode of transport and not just as a recreational activity”, says Vijayakumar.

“There are also over 100,000 daily trips by bikes in Vancouver, which was higher than any of the other cities in the study.”

Over four per cent of all trips made in Vancouver are by bicycle, according to the report.

Bike lanes are not all equal

Separated bike lanes can provide protection from cars, but Vijayakumar says Vancouver’s model actually proves that for quieter routes, that kind of infrastructure is not always necessary.

“I think that one of the most interesting things about the Vancouver network is the majority of their cycling infrastructure is actually just signed routes on residential streets that are shared with cars.”

Vijayakumar says this shows that while cycling infrastructure is important, the most expensive option is not always the best option.

“It’s all about finding the right fit for the environment.”

more words from Dale Bracewell, Transportation Manager for the City of Vancouver…

In 2012, Vancouver’s city council set an ambitious goal to reach a bike mode split of 7% by 2020 which was achieved in 2015, 5 years ahead of the plan! And even more impressive: if you just look at just work commute mode splits, they’ve achieved 10% which certainly puts them in a rare category in North America.

When you ride around the fantastic network of bike lanes throughout the city, it is no wonder Vancouver, BC is experiencing a leap in ridership. Most of the city feels safe to ride in and it’s fun to see all sorts of people out on bikes. And the fact that they are constantly going back to re-engineer and tweak some parts of the lanes to make them even safer is a key plot point that we need to engage all cities to do more of.

So sit back and watch and listen to other advocates across the nation who were in Vancouver for the 2016 Pro Walk Pro Bike Pro Place conference who also offer their observations and experience riding the wonderful network of biking nirvana (well for those of us in cities that aren’t near this quality just yet.)

I’ll end by reflecting on New York City, where we have had tremendous growth and very good work by our NYC DOT in the past 8 years. However, you can see here the extra mile Vancouver is putting in. When you ride in the downtown it’s uncommon you’ll see a bike lane with a vehicle conflict – without some sort of safety feature or paint. And I didn’t see one car parked in the protected lanes in 3 days of riding. In New York, we need to take the additional steps of shoring up our bike infra. After all, we already have the real estate in many cases, we just need to make our protected lanes more bold!