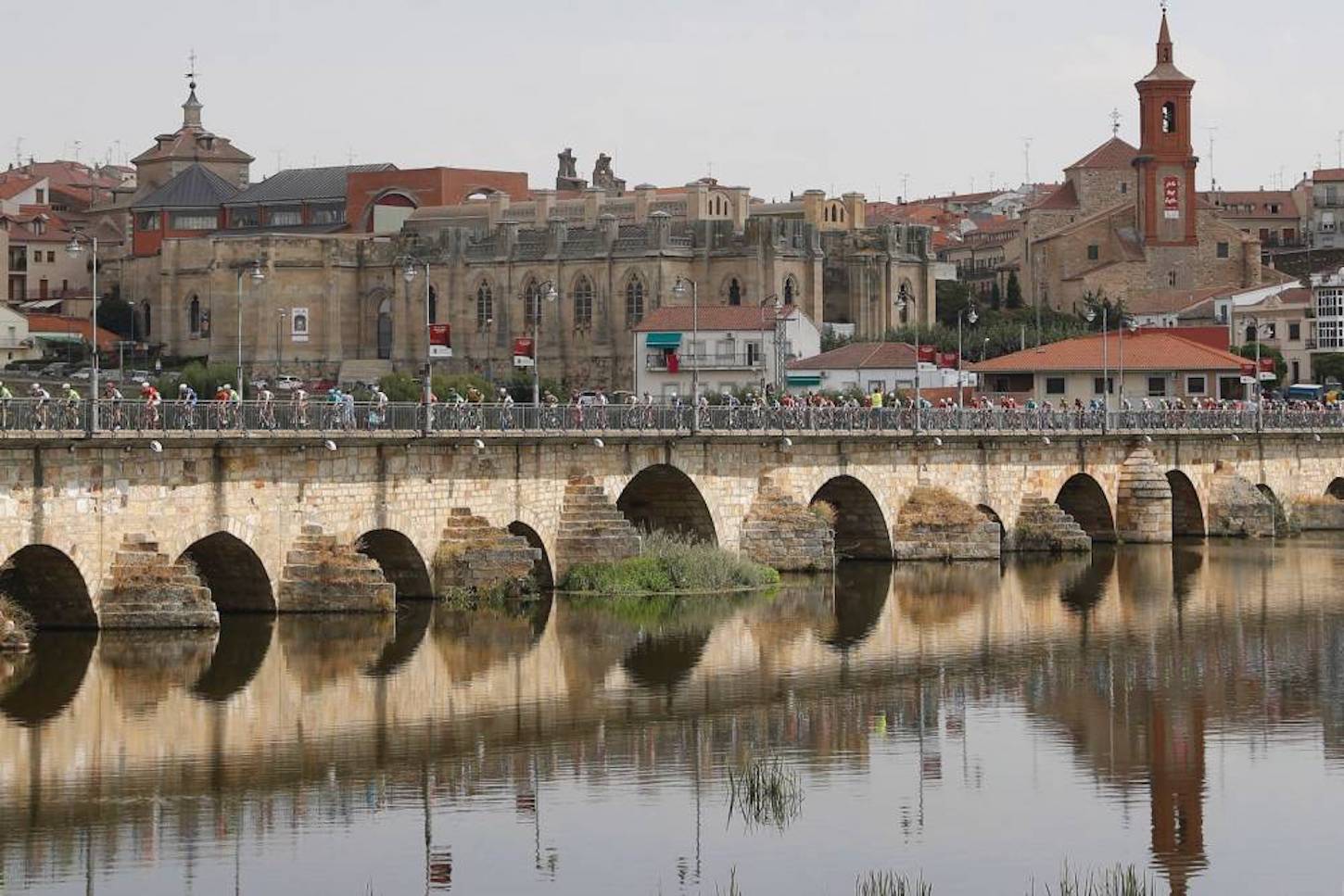 Elia Viviani (Quick-Step Floors) sprinted to a comfortable victory in stage 10 of the Vuelta a Espana in Bermillo de Sayago today.

At the end of a mostly flat 177 kilometer stage, the Belgian squad were in total control of the lead-out, and launched the Italian sprinter for the finish line with around 100 meters to go.

Peter Sagan (BORA-hansgrohe) was on Viviani’s wheel and responded to his acceleration, but stood little chance of catching him. Giacomo Nizzolo (Trek-Segafredo) was third.

Despite a late puncture, Simon Yates (Mitchelton-SCOTT) finished in the main bunch and stays in the red jersey at the top of GC.

“I think it’s one of the most perfect lead-outs we ever do in this year … today we had a little more pressure … it was amazing”, Viviani said.

Despite picking up an untimely puncture inside the final 15 kilometers, Simon Yates (Mitchelton-Scott) retained the red jersey and his slender one-second lead over Spanish veteran Alejandro Valverde (Movistar) on a largely uneventful day under the Spanish sun.

Two riders charged themselves with the thankless task of holding the peloton at bay on a day that was always destined for the sprinters in general, and Elia Viviani in particular.

Tiago Machado (Katusha-Alpecin) bridged over to lone leader Jesus Ezquerra (Burgos-BC) after the Spaniard had earlier managed to extricate himself from the pack shortly after the start of the stage.

The two escapees quickly built up a lead of three-and-a-half minutes on a loop eastwards and then back through the start city of Salamanca, but they were always on a hiding to nothing as the race headed west towards the Duero river valley and within a stone’s throw of Machado’s native Portugal.

As the race climbed out of the valley on the only categorised climb, the Alto de Formoselle, Ezquerra and then Machado were reeled in before the summit, over which Valverde led a slightly reduced peloton after a number of riders had been tailed off following the pace-setting of Sagan’s Bora-Hansgrohe team.

As another Spaniard from the pro-continental wildcard team Burgos-BH zipped off, there followed a spate of punctures with the likes of Yates and his GC rivals Nairo Quintana (Movistar), Wilco Kelderman (Team Sunweb) and Thibaut Pinot (Groupama-FDJ) all succumbing to the coarse road surface.

Lone leader Diego Rubio was swept up just inside the final 10km to set up the grandstand sprint finale in the tiny town of Bermillo de Sayago.

With the wind buffeting the peloton on the exposed approach, Quick-Step Floors formed their train and did their best to shelter the talismanic Viviani. And when Bora’s Lukas Postlberger put in a spirited dig going under the flamme rouge, the team combined to reel in the Australian rider ahead of the home straight.

Fabio Sabatini then launched compatriot Viviani to the line and the 29-year-old kept to his side of the bargain surging clear to make it very much a one-horse race.

Coming just hours after Frenchman Julian Alaphilippe won Stage 3 of the Tour of Britain in Bristol, Viviani secured Quick-Step’s 60th victory of a vintage season that shows no signs of abating.

It also marked a return to winning ways for 29-year-old Viviani after he made a hash of the Stage 6 finale and failed to trouble Valverde when the Spaniard rode to his own second win in Stage 8.

The only change in the overall standings after a day of attrition for the red jersey rivals saw 10th place George Bennett move to within 47 seconds of Yates’ lead after the New Zealander picked up the final bonus second on offer at the intermediate sprint.

Yates leads Valverde by one second with a second Movistar rider, the 2016 Vuelta champion Quintana, completing the virtual podium a further 13 seconds in arrears.

Earlier in the stage, the race was marred by a nasty crash involving the Italian Simone Petilli of UAE Team Emirates who became the third rider to withdraw from the race after being knocked unconscious in a fall with 40 kilometers remaining.