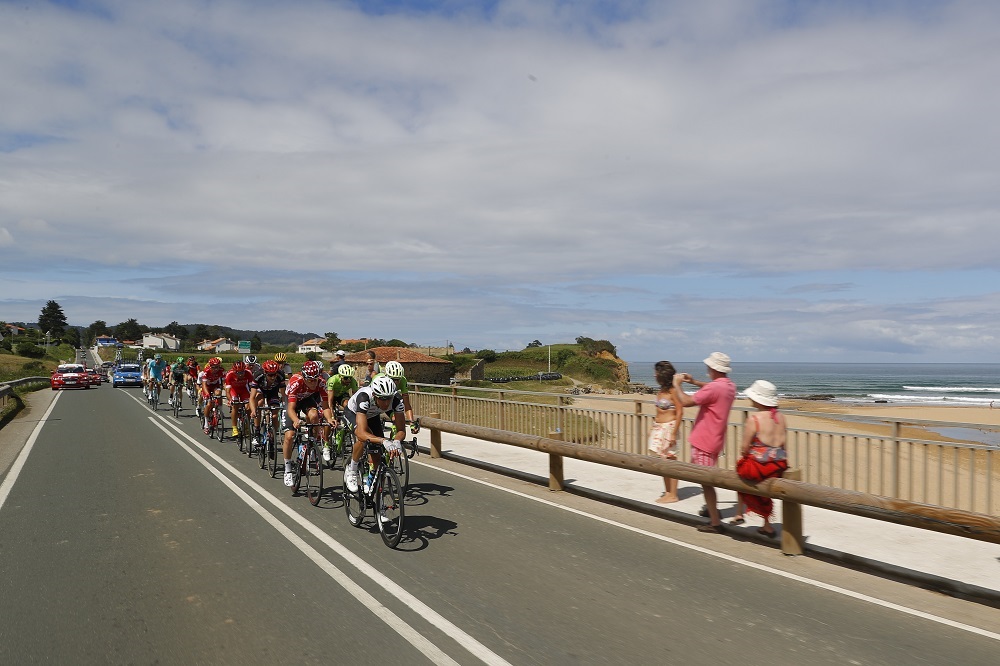 Cairo Quintana regained the overall lead of the Vuelta a Espana with a superb solo victory atop the Lagos de Covadonga.

The Movistar rider left his rivals behind with an attack 3.5 kilometers from the line and hung on to beat Robert Gesink (LottoNL-Jumbo) into second place by 24 seconds and Chris Froome (Sky) into third by 25 seconds.

With previous leader David de la Cruz (Etixx – Quick-Step) having earlier been dropped, Quintana moves back to the top of the general classification and opens up leads of 57 seconds over second-placed Alejandro Valverde (Movistar) and 58 seconds over Froome.

Nairo Quintana set a few records straight with a superb show of strength in the 10th stage of the Vuelta at the Lagos de Covadonga, scene of a fantastic battle between the favorites. The Colombian, who had yet to win a stage in the Tour of Spain, finally did so in style after dropping all his rivals one by one before going on his own 3.5 km from the line. He finally stole stage honors from Dutch escapee Robert Gesink (Lotto Nl-Jumbo), who bravely salvaged second place ahead of an astounding Chris Froome (Team Sky), who looked out of sorts in the beginning of the climb only to strike back in the finale and finish third, 25 seconds behind Quintana. Alberto Contador (Tinkoff) was another of the day’s leading roles as he launched the hostilities six kilometers before the line.

The group worked perfectly and saw their lead go up to reach 5:30 with 66 km to go. But the peloton, led by De la Cruz’s team-mates, cut the gap down to four minutes at the foot of the 1st category Alto del Mirador del Fito. At the top (km 148), Omar Fraile surged to pick 10 points. He was joined in the descent by fellow-Spaniards Luis Angel Mate (Cofidis) while Dombrowski crashed. The leading group split in the long flat section leading to the final ascent, losing Moser and Gruzdev. The pack, led jointly by Etixx-Quick Step and Movistar, came back within three minutes at the foot of the last climb.

Vervaeke was the first of the escapees to lift the gauntlet on the climb but he was quickly brought back by Rolland and what remained of the break. Behind them, Movistar raised the pace and made it too hard for Chris Froome, who lost ground with 10 km to go. The help of Peter Kennaugh and then David Lopez looked useless at that stage. In the leading group, Rolland looked the freshest of the lot and he went at the 8-km-to-go mark, only to be caught by Gesink one kilometer later. The Dutchman, rejuvenated after a blank season, went on his own to clinch.

The battle for final victory took a decisive turn when Alberto Contador launched a blistering attack with 6 km to go. Only Quintana was able to react and stay with him while red jersey holder David de la Cruz lost ground, as did Estevan Chaves and Simon Yates (Orica-BikeExchange). Quintana bore the second blow with 4 km left to go on his own chasing for Gesink, leaving Contador hapless.

Further down the slope, Froome was finding a second breath and making up most of the lost time. The three-times Tour de France champion came back on all of his rivals but Quintana and Gesink, who salvaged a deserved second place and might have dreamt of more.

But the day belonged to Quintana, who now leads Chris Froome by 57 seconds overall and Alejandro Valverde by 58 seconds.