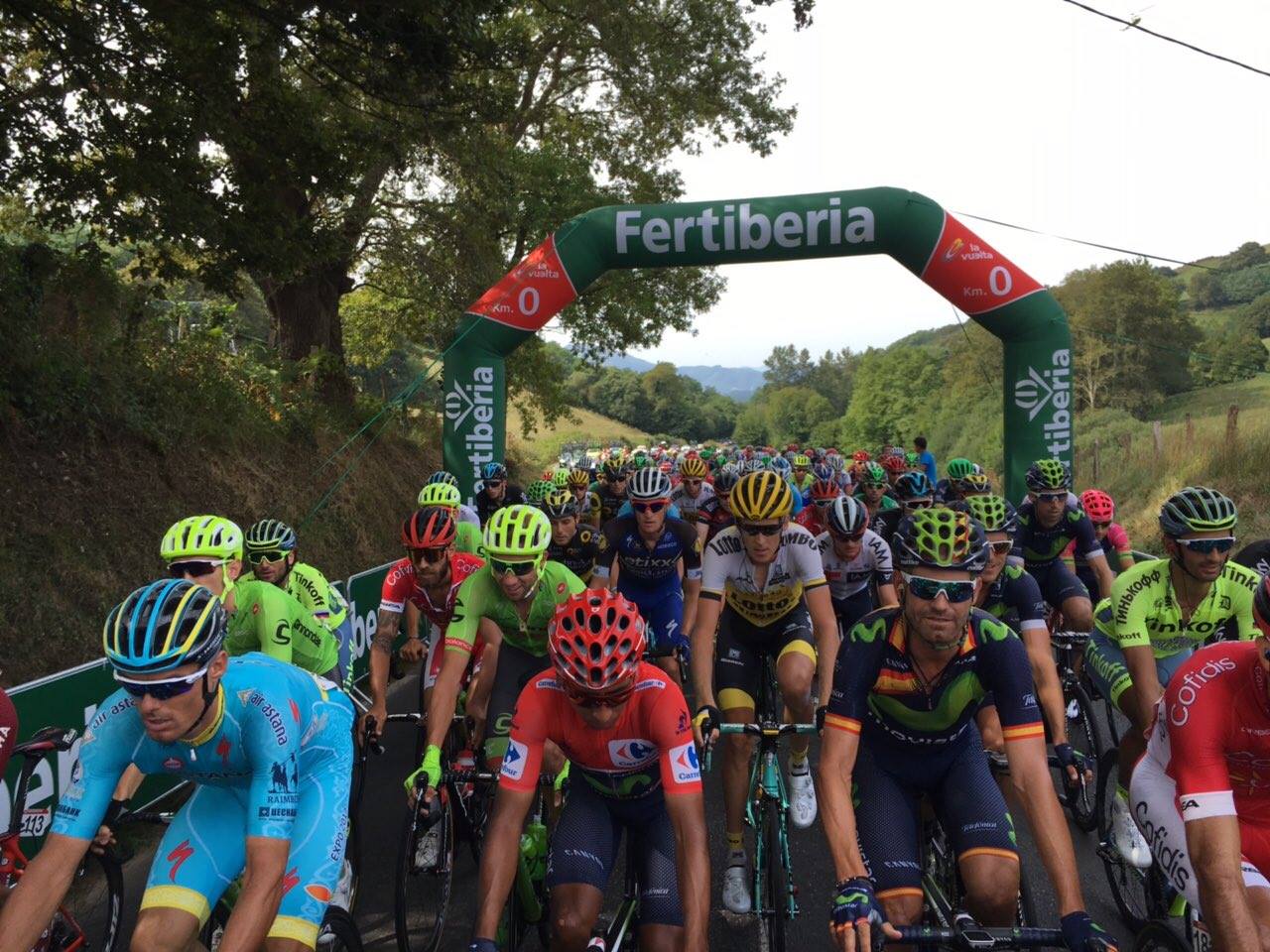 Robert Gesink (LottoNL-Jumbo) won stage 14 of the Vuelta a España on the summit finish of Col d’Aubisque, beating Kenny Elissonde (FDJ) and Egor Silin (Katusha) to the lines.

Gesink had been part of a 40-man breakaway that got away early on in the queen stage of the Vuelta, and held on over three category one peaks before the Dutchman attacked and won on the Aubisque.

GC favorites Nairo Quintana (Movistar) and Chris Froome (Team Sky) couldn’t be separated on the final climb, with Quintana holding on to the lead ahead of Froome.

Alejandro Valverde (Movistar) was the biggest loser after slipping out of contention on the final climb. Simon Yates (Orica-BikeExchange) moved up the GC standings after an attack on the penultimate climb saw him take over a minute on the other contenders.

Gesink was part of an unusually-large 40-rider breakaway that formed ahead of the first of the four big climbs across the French border and forced Team Sky into a day-long chase as Movistar had Dani Moreno, 5:38 down overall, in the move.

The Dutchman had missed a six-man move that formed ahead of the final climb, but produced a strong ride to make his way across, before making his bid for freedom. The race situation chopped and changed but Gesink found himself with Kenny Elissonde and Egor Silin for company in the final couple of kilometers, and he managed to hold them off during the final uphill dash.

Robert Gesink came back from the dead to claim the Queen stage of the Vuelta a España at the Col d’Aubisque, powering away from Kenny Elissonde and Egor Silin 300 meters from the line for his maiden grand tour stage win. The Dutchman, dropped by his breakaway companions in the descent from the Col de Marie-Blanque, eventually rejoined a reduced leading group before showing he was the strongest on the day. Briton Simon Yates, at the end of a long-range, perfectly executed attack, moved up to fourth overall behind his team mate Esteban Chaves. Alberto Contador and Alejandro Valverde, who dropped out of the top 5, lost ground. Nairo Quintana, who attacked several times, still leads Chris Froome by 54 seconds but could not drop the Briton despite several attacks.

They were 170 riders at the start of a grueling trek featuring four climbs to the Col Inharpu, the Col du Soudet, the Col de Marie-Blanque and the Col d’Aubisque.

The gap reached five minutes near the top of the first climb, the Col Inharpu, where Elissonde, Geniez and Fraile briefly broke away from the leading group. The descent, however, was treacherous and they were reined in as Jose Joaquin Rojas and Jacques Janse van Rensburg crashed. The Spaniard made it back to the front pack while Van Rensburg was caught up by the main peloton.

Kenneth Vanbilsen (Cofidis), who was suffering from a stomach bug, pulled out, and was soon followed on his way out by Johan Le Bon (FDJ), Philippe Gilbert (BMC), Davide Malacarne (Astana) and Angel Madrazo (Caja Rural-Seguros RGA) before the foot of the Col du Soudet.

The break had a 6:30-lead over the Team Sky-led peloton at the foot of Marie-Blanque. In that third climb, Simon Yates (Orica-Bike Exchange) jumped away from the main pack and was briefly helped by his team mate Jack Haig, who had attacked a bit earlier. Yates had 1:15 at the top having rejoined his team mates Cort Nielsen and Gerrans, who had dropped out of the leading group, and the Briton later picked up another domestique in Keukeleire.

Six men – Silin, De Clercq, Elissonde, Bennett, Bernard and Bakelants – went away on the descent and opened up a significant gap.

Movistar and Tinkoff took over from Sky at the front of the pack.

Elissonde’s acceleration 10km from the finish was fatal to De Clercq and Bernard and the leading quatuor was joined by Gesink, who then went solo before being caught by Elissonde and Silin. He had the best legs in the finale, though, and put the Frenchman, who claimed the polka dot jersey, 7 seconds back while Silin finished third 9 seconds off the pace.

Yates was fifth, 39 seconds behind Gesink.

Quintana was the first to attack in the favourites’ group, forcing Froome to dig deep while Valverde lost contact.

The Colombian was at it again about five kilometres from the top but Froome came back with Contador and Chaves in his wheel, before the Colombian counter attacked and gained 33 seconds on the line.