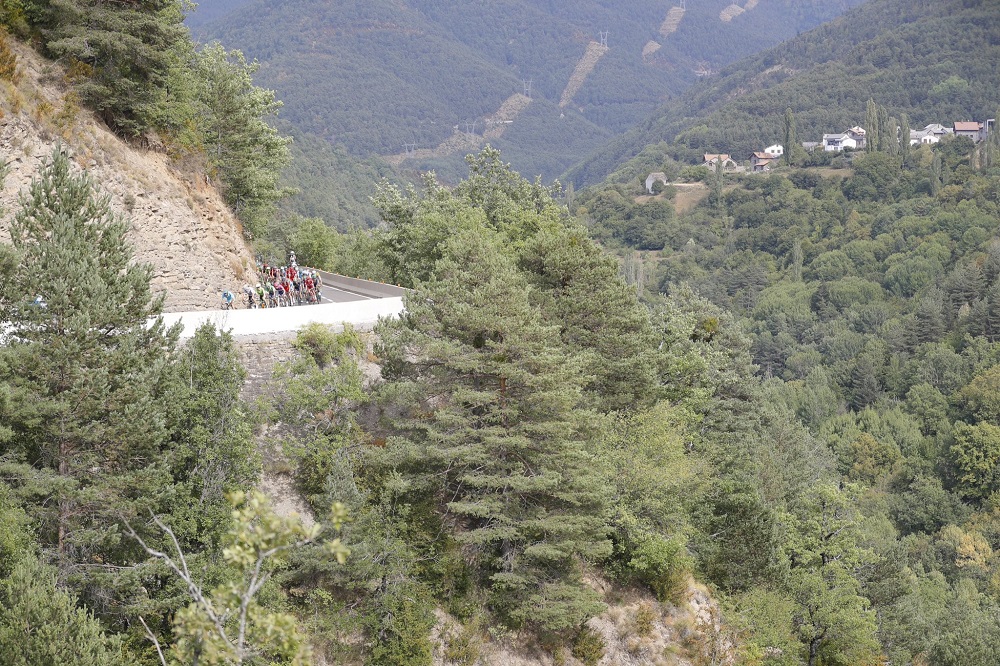 The biggest loss of the day belonged to GC favorite, Chris Froome (Team Sky), who finished more than two and a half minutes behind his chief rival Quintana.

As a result, the Team Sky rider now trails the Colombian by 3:37 in the overall classification.

Contador launched an attack after just 6km and Quintana was alive to the danger. Froome was forced to chase due to a lack of teammates but could not get back on terms. Contador went again around 2.2km later and the lead group rapidly opened up over a minute on Froome over a short distance.

Worse still for Froome, most of his teammates were further down the road and were unable to catch and assist their team leader. Once their deficit was five minutes to the front and three to Froome, they abandoned their chase.

After the frantic start to the stage, things calmed down and the gap between Quintana and Froome stabilised around 2-45, and fluctuated no more than about 10 seconds either way.

Elissonde, wearing the polka dot climber’ jersey, had a minor battle with Fraile for points on the day’s categorized climbs, with the latter taking early honors.

Astana worked hard on the front of the Froome group, but despite getting the gap down below two minutes it went out again to 2-18, where it stuck for a number of kilometres.

No-one wanted to ride with Quintana on the final climb so the race leader took it on himself, setting a blistering pace. It didn’t take long for the group to be whittled down to just the red jersey, Contador and Brambilla.

Contador went backwards and it was left up to the other two to battle for stage honors.

Nairo Quintana made a big move towards the Vuelta a España title when he benefited from Alberto Contador’s early attacks to turn the race upside down on Sunday. The Colombian finished second in the stage behind Italian Gianluca Brambilla as his main rival Chris Froome was trapped behind. Contador is now fourth overall just over four minutes off the pace while Froome lies second, 3 :37 behind Quintana and Esteban Chaves is third 20 seconds further back.

Froome was trapped behind and worse, all of his team mates but David Lopez, who was then quickly dropped, were in a third group further back. Contador and Quintana both had two team mates with them in a crazy start to the stage.

The increased to three minutes despite the work of Astana and Orica-Bike Exchange at the front of the Froome group. In the climb to the l’alto de Cotefablo, Orica-Bike Exchange contributed to the chase to reduce the gap to 1 :45 but in the valley, it rose up to 2 :30 (km 94).

At the foot of the final climb, Contador and Quintana were still sitting on a two-minute cushion.

Quintana set the temp in the front group while Froome was left to do the hard work behind to limit the damage. With about three kilometres left, Astana took charge in the chasing group.

Quintana accelerated with three km left and was only followed by Brambilla, who took the day’s laurels while Contador finished 34 seconds off the pace.

Esteban Chaves again showed he had great legs and crossed the line 1:53 behind Brambilla while Froome ended up with a 2 :39 deficit.