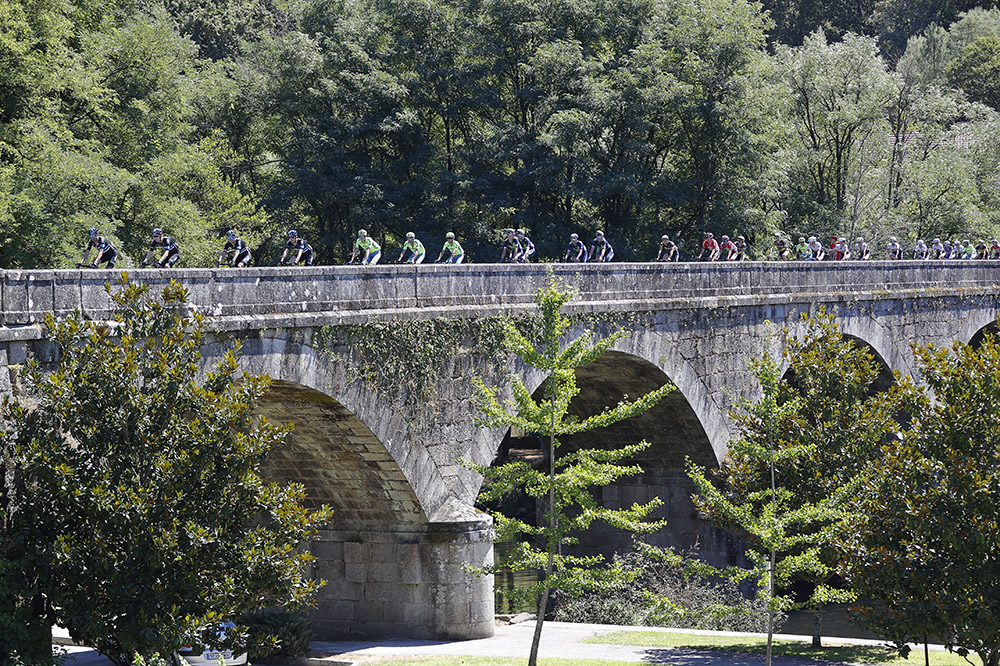 After a very calm and slow stage, the early break was brought back by an increasingly nervous peloton with 17 kilometers to go.

From there, the race came down to  a big fight for position as they sped towards an uncategorized climb in the final kilometers of the stage.

Tiago Machado (Katusha) launched a strong attack and as no one reaction he soon got an advantage of 15 seconds. Kenny Elissonde (FDJ) took off in pursuit and then Mathias Frank, David de la Cruz and Jan Bakelants joined the Frenchman. Finally, Dylan Teuns (BMC) also made it across to make it a very strong chase group.

Giant-Alpecin and Trek reacted quickly and they gave chase, keeping the gap at a minimum as they entered the final 10km. The chasers were brought back before they crested the summit and Mchado was justa few metres ahead as they went down the descent.

Macahado was brought back with 8.5km to go where Tinkoff had taken control with Daniele Bennati. Christian Knees took over for Sky, with Michael Kwiatkowski and Peter Kennaugh on his wheel.

With 5km to go, BMC, Cofidis, Bora-Argon 18 and Lotto Soudal lined out their trains before Sky again took control with Michal Golas. Lotto Soudal was the first sprint team to take charge when Adam Hansen and Jelle Wallays hit the front with their sprinter Tosh van der Sande in third position.

Farrar did the lead-out for Sbaragli but it was too early and instead Rudiger Selig (Bora-Argon 18) hit the front. That’s when the Etixx-QuickStep train kicked into action with Zdenek Stybar, Yves Lampaert and Meersman. The former two gave the latter a perfect lead-out and no one could come around the Belgian who took his first grand tour win.

Michael Schwarzmann narrowly edged Magnus Cort in the battle for second and that turned out to be costly for the Dane. Second place had been enough to take the race lead but now the red jersey went Michal Kwiatkowski who sprinted to fourth. However, he is still equal on time with nine other riders, with the Movistar pair of Jose Joaquin Rojas and Alejandro Valverde sitting second and third respectively.

Kwiatkowski will have a hard time defending his jersey in stage 3 which is expected to be the first day for the GC riders. After a flat start, the riders face a category 3 and a category 2 climb as a warm-up for the brutal final challenge, the Mirador del Ezaro. It may only be 1.8km long but with an average gradient og 13.8%, the wall will be the scene of the first battle between the climbers.

Perfectly led out by his Etixx-Quick Step team-mates, Gianni Meersman surged in the final sprint to take the stage 2 laurels in Baiona on Sunday. The Belgian did not miss this rare chance offered to sprinters to win ahead of Germanys’ Michael Schwarzmann (Bora Argon) and Dane Magnus Cort Nielsen (Orica-Bike Exchange). Fourth in this short 160.8-km ride from Ourense, former world champion Michal Kwiatkowski of Poland rid his Team Sky team-mate Peter Kennaugh of the race leader’s red jersey.

The whole of the 198-strong peloton started from Ourense centre at 13:45. Two riders took off from the flag: Italy’s Cesare Benedetti (Bora Argon 18) and Frances’ Laurent Pichon (FDJ). Bryan Nauleau (Direct Energie) caught up with them at kilometer 9.

The three worked well and held a maximum lead of 4:;25 at kilometer 43 as the pack were still undecided at what attitude to adopt. Finally, Peter Kennaugh’s Team Sky led the chase, quickly aided by Giant-Alpecin and Trek-Segafredo, two teams with bunch sprint hopes with Niklas Arndt and Niccolo Bonifazio.

By the 3rd category Alto de Pontefria (Km 80), the lead of the escapees had gone down to 2:35 and Pichon was first at the top, snatching the only KOM points on offer for the day. The gap kept decreasing until 38 km from the finish, when Belgian champion Philippe Gilbert (BMC) surged to catch the leading trio. But the gap was then down to 25 seconds and the break looked doomed. Gilbert had to be content with snatching the three-seconds bonus at the intermediate sprint of Vigo, 19 kms from the line.

Then the teams with an interest in a bunch sprint – but also Team Sky – started organising and the four were caught with 15 km to go. Several attempts – the most notable one by Tiago Machado 13 km from the line – took place in the finale but the peloton, led by Peter Kennaugh’s team-mates, kept a close watch.

The stage was set for a final sprint and Lotto-Soudal and Giant-Alpecin were the most active teams in the last 3 km. Spectacular crashes by Sergey Lagutin (Katusha) and Ryan Anderson (Direct Energie) did not hamper the final battle which saw Etixx-Quick Step emerge to set up a perfect sprint for Meersman. Wile he miss the stage podium, Kwiatkowski made the best of his finishing power to seize the Vuelta lead ahead of Movistar’s Jose Joaquin Rojas and Alejandro Valverde.