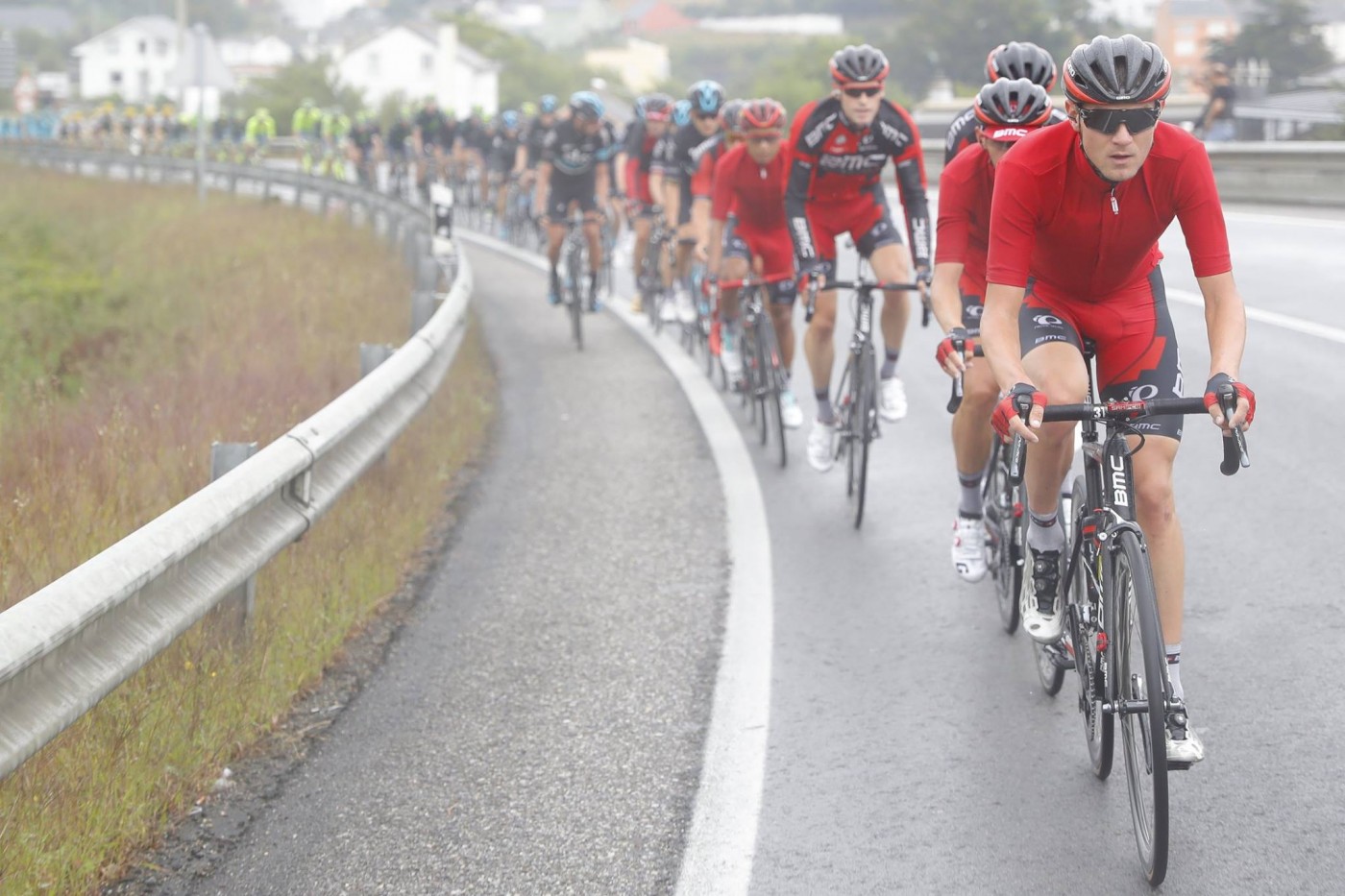 Gianni Meersman (Etixx-QuickStep) claimed stage 5 of the Vuelta a Espana in a crash marred finale in Lugo, marking his seconds stage victory in this year’s Spanish Grand Tour.

With just two riders in the break – Tiago Machado (Katusha) and Julien Morice (Direct Energie) – the peloton was more concerned about the rain and slippery roads which led to a slow race in the first half, when the leaders were allowed to go six minutes clear. Once the sun began the smile again to the riders, the chasers began to pick up the pace, among those to move at the front being also Etixx – Quick-Step’s Martin Velits, who worked hard to ensure everything comes back together before the last ten kilometers.

On the uphill section of the old town, Simon Clarke (Cannondale-Drapac) and Philippe Gilbert (BMC) attacked and opened a 10-second gap, but despite their effort they were soon reeled in, just before the final kilometer. The narrow road and nervous fight to find a good position after that small climb led to a crash in the peloton, which was split by the incident, leaving only a dozen riders in the mix for the win. Lead-out by his teammate, Zdenek Stybar, Meersman succeeded in out-gunning Laurent Didier (Trek-Segafredo) and Kevin Reza (FDJ), sprinting to his second victory in just five days.

Also, the peloton was plagued by a couple of crashes during the closing kilometers of today’s stage, claiming such casualties as Steven Kruijswijk (LottoNl-Jumbo), who was later forced to abandon the race due to injury.

Chris Froome was also caught up in a subsequent crash, where the Team Sky rider barely managed to stay upright.

Additionally, race leader Darwin Atapuma lost more than a minute in the melee, but the three kilometer rule was applied, thus allowing the Colombian rider to retain his red leaders jersey for another day.

Perfectly kept out of trouble by his Etixx-Quick Step team, Gianni Meersman avoided a massive pile-up in the finale of stage 5 in Lugo to snatch his second stage victory in the Vuelta. Already winner of stage 2, the Belgian outsprinted a bunch reduced to some 20 riders by the crash which took place in the last kilometer. On the line, he beat Italy’s Fabio Felline (Trek-Segafredo) and France’s Kevin Reza (FDJ). Despite being held up by the pile-up, Darwin Atapuma (BMC) retained his leader’s red jersey.

194 riders left Viveiro in the rain at 13:33. Luis Mas (Caja Rural), injured in a crash after the finish of yesterday’s stage 5, did not start. From the flag, two riders surged, Portugal’s Tiago Machado (Katusha) and France’s Julien Morice (Direct Energie). Their lead quickly increased and reached 6:30 after A00 km over a peloton led by Darwin Atapuma’s BMC team-mates and by Trek-Segafredo’s Julien Bernard, anticipating a sprint for Niccolo Bonifazio.

The conditions were too hard for Brazil’s Murilo Fischer (FDJ), who called it quits with stomach problems.

Some 75 km from the finish, Machado dropped Morice and went on his own as the bunch had cut the gap down to 3:30. On his own, the Portuguese widened the gap and snatched the points at the intermediate sprint (Km 98) ahead of Gianni Meersman (Etixx-Quick Step) and was first at the top of the only ascent of the day, Puerto de Marco de Alvare (3rd cat, km 118.8). In the climb, Belgium’s Thomas De Gendt (Lotto-Soudal) collected two points to move level with KOM leader Alexandre Geniez (FDJ) on 10 points.

With 40 km to go, the teams with a solid finisher – Etixx-Quick Step, Trek-Segafredo and Giant-Alpecin – raised the tempo and the gap went down.

Machado was reeled in 14 km from the line by the peloton, led by Team Sky and Movistar. In the last ten kilometers, the teams with sprinters and the ones with GC leaders fought for front positions as the bump two kilometers from the line could also favour attacks. They came from Belgian champion Philippe Gilbert (BMC) and Australia’s Simon Clarke (Cannondale-Drapac) who surged in the hill but were caught under the red flame.

The stage was set for a bunch sprint, but it was peculiar one as two thirds of the peloton were held up by a massive crash, whose main victim was Lotto N-Jumbo leader Steven Kruijswijk. Perfectly led out by his team-mates, Meersman surged for an impeccable stage victory over a group of some 20 riders, among which Alejandro Valverde and Chris Froome.