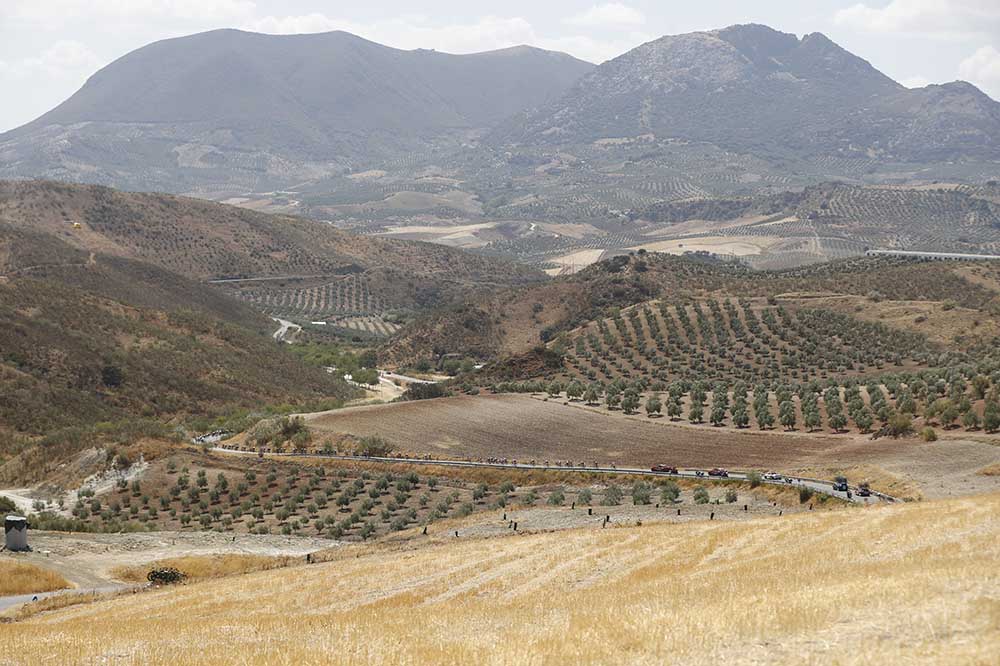 Matteo Trentin sprinted to his third victory in this year’s Vuelta a España today, after the Quick-Step Floor’s rider benefited from a strong lead-out from his team to comfortably beat Gianni Moscon (Team Sky) and Soren Kragh Andersen (Team Sunweb) in Tomares.

Meanwhile, race leader Chris Froome (Team Sky) finished in seventh place to retain his grip on the overall race lead, 59 seconds ahead of second-placed Vincenzo Nibali (Bahrain Merida) and 2:13 in front of  Esteban Chaves (ORICA-SCOTT) in the general classification.

“It’s amazing because I came in this race with confidence but I never expected something like this,” said Trentin, who has doubled his Grand Tour stage win tally over the course of the last two weeks.

“On paper, it looked less hard, especially from three to two kilometers to the finish. But we decided to go for it full, the whole team, except of course for [David] De la Cruz. The guys were incredible, it was amazing. Everybody did his job and gave everything they had, 100 per cent. When the team is like this you have to finish off the work they do.”

The stage was complicated by an uphill drag in the final 3 kilometers, with the road kicking up again just ahead of the flamme rouge and then again with around 600m to go. By the final few hundred meters a messy peloton was split up and strung out but Trentin, having been guided through the closing kilometers by his Quick-Step Floors team, was in a perfect position and made no mistakes.

It was a largely uneventful afternoon as the peloton enjoyed a sort of active rest-day after what has been an intense first half of the Vuelta and ahead of two big mountain stages this weekend. There were sing-alongs among the Trek-Segafredo riders in the bunch, though it wasn’t such a jolly affair for Omar Fraile, who vomited while on his bike before abandoning the race – leaving Dimension Data with just three riders.

Cannondale-Drapac and LottoNL-Jumbo lent a small hand but largely it was Quick-Step’s Tim Declercq keeping the break on a short leash. With 50km to go, the gap was down to below two minutes, though they wouldn’t fall into the trap of making the catch too soon.

In the end, the made the catch very late. The breakaway split with 20km to go, leaving just De Marchi and De Gendt out front, and De Marchi managed to stay away until 7km to go as De Gendt’s hopes were ended by cramps.

Quick-Step had allowed Bora-Hansgrohe and Katusha-Alpecin to enter the fray but made sure they were back in full control in the final 5km ahead of the uphill ramps.

Niki Terpstra led them onto the first and major one as all the riders sprang out of the saddle. He pulled over just inside the 3km to go banner as Bob Jungels marked moves from Adam Hansen (Lotto Soudal) and Kragh Andersen. The road flattened out and on the next kick Alexey Lutsenko (Astana) attacked but seemed to slip a gear, and Julian Alaphilippe led Trentin into the final kilometer. The Italian was a few wheels back as the leaders came through the final right-hand bend but he soon opened his sprint, comfortably surging through the middle of Moscon and Kragh Andersen.