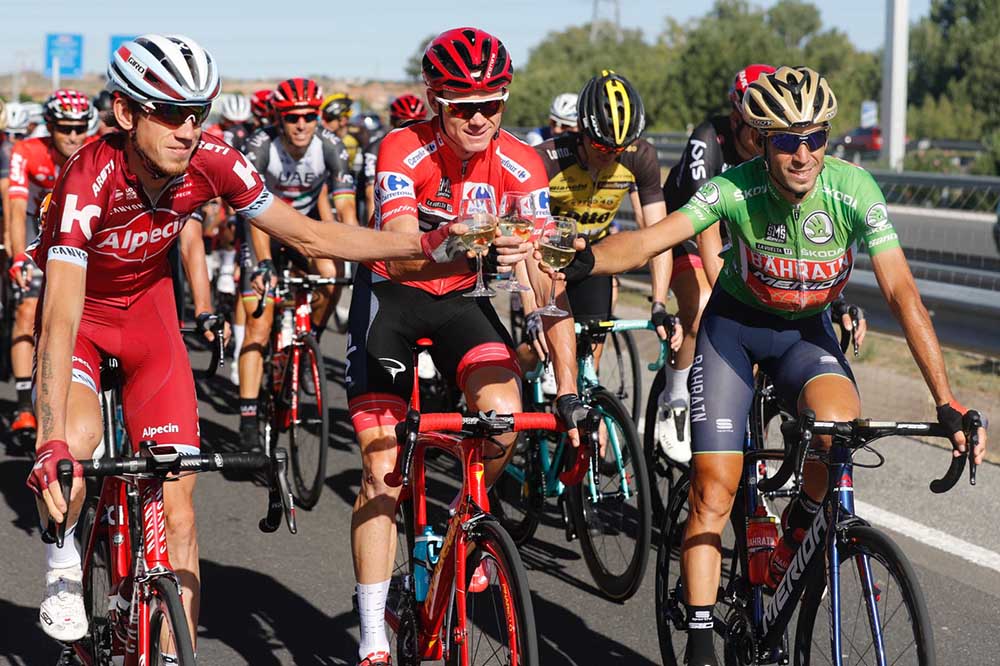 Matteo Trentin sprinted to victory in Madrid on the 21st and final stage of the 2017 Vuelta a España as Team Sky’s Chris Froome securedthe overall win.

Lorenzo Manzin (FDJ) was second and Søren Kragh Andersen (Team Sunweb) third in the sprint as Trentin narrowly failed to win the points classification at the last opportunity, despite winning his fourth stage of the race.

Froome’s main objective – his first-ever Vuelta title, and a phenomenal Tour de France/Vuelta double in 2017 – was of course achieved, and he becomes a five-time Grand Tour winner with four Tours de France already to his name.

A processional first part of the final stage saw Froome and Team Sky enjoy a bottle of beer, before Froome, Alberto Contador (Trek-Segafredo) and others cracked open some bubbly.

Froome then accepted a cup of coffee from a Bahrain Merida rider, and as the race rolled slowly into Madrid, retiring hero Contador moved ahead of the peloton and waved to the crowds at the roadside.

The racing then began in earnest, with the points classification still up for grabs, and Froome was clearly in no mood to gift the green jersey to Trentin of Quick-Step Floors.

Both teams raced to set up the intermediate sprint, which Trentin won, keeping his hopes alive of claiming the prize.

It all came back together and although Trentin took the stage, Froome’s 11th place secured him three jerseys: red, green and white.