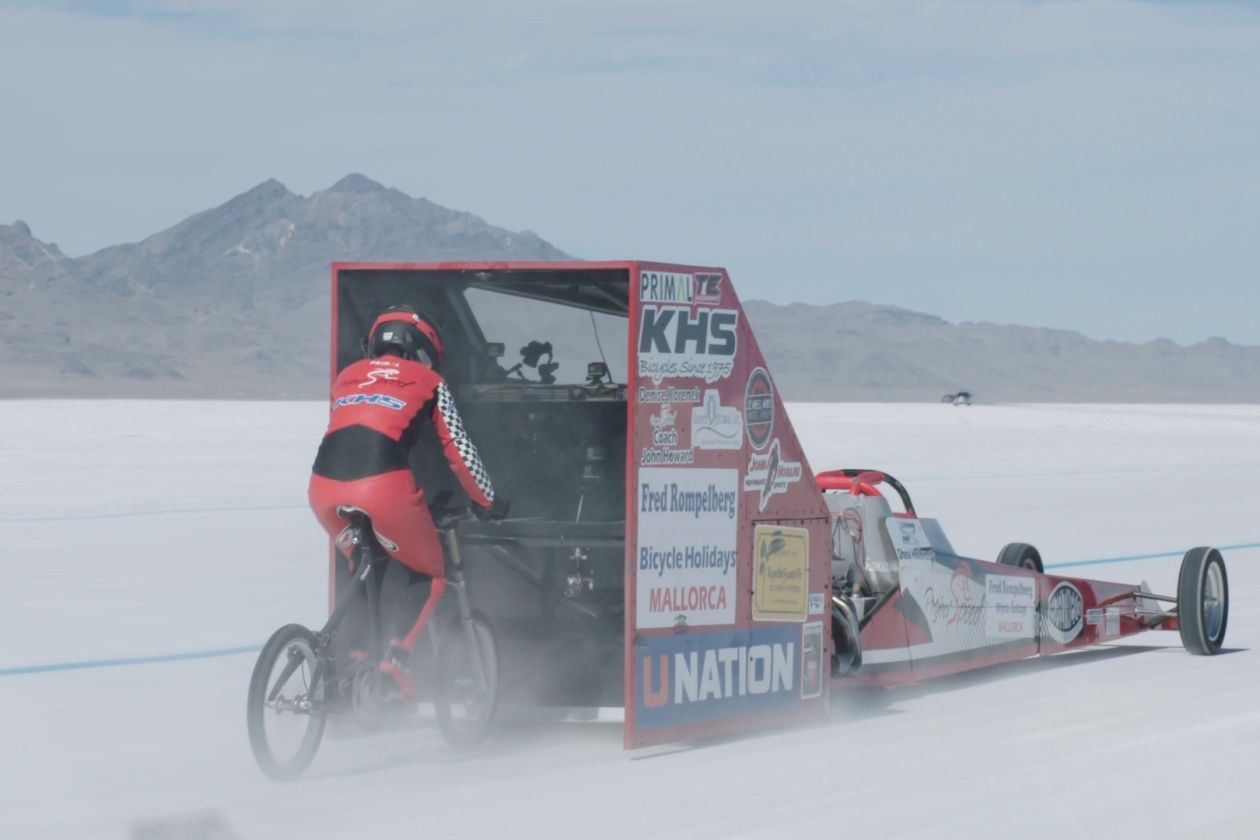 The record for paced cycling speed was previously held by Dutch rider Fred Rompelberg, who hit a top speed of 167 mph in 1995.

Denise Mueller-Korenek rode a custom-designed machine featuring a unique double drivetrain capable of propelling the bike forward 128 feet with each revolution of the pedals, a necessity for hitting speeds surpassing the takeoff velocity of the typical commercial jetliner.

The motor-paced cycling land speed record is both an eccentric mark and true combined effort. Trust is critical. In the record-setting run, professional race car driver Shea Holbrook towed Mueller-Korenek close to the two-mile mark of the five-mile salt flats course, hitting a speed around 150 mph. Then Mueller-Korenek released her cable tether, pedaling the final three miles on her own power, but tucked into the dragster’s slipstream.

As Holbrook continued to accelerate, Mueller-Korenek hit 183.9 mph, shattering the prior world record of 167 mph set by Dutch cyclist Fred Rompelberg in 1995.

“I’m speechless,” Mueller-Korenek said. “It hasn’t hit me yet.”

Still in her red racing suit, Mueller-Korenek hugged her cowboy hat-wearing husband, Chris Korenek, whom she’d met and married in the prior year, and had played a key role in her record-setting effort. She hugged her 18-year-old son, Daniel, who had greeted his mother at the finish line and was the first to tell her she had broken the record.

Mueller-Korenek’s historic run took place at World of Speed, a four-day rally on the flats that features everything from motorcycles to muscle cars to streamliners capable of surpassing 450 mph.

For days, spectators crowded around Mueller-Korenek’s custom bicycle, itself a marvel of engineering. Equipped with motorcycle wheels, the carbon fiber bike is long and low and features a pair of 60-tooth chainrings which work in combination with a 12-tooth cog, allowing Mueller to achieve up to 130 feet of travel on a single pedal stroke. The unusual setup is necessary to keep the bike accelerating at speeds far beyond 100 mph.

Mueller-Korenek attempted this feat back in 2016, setting a new women’s mark of 147.7 mph. But mechanical issues and weather had cut short their attempt to surpassing the overall record.

Mueller-Korenek was eager to return to the salt, but her follow-up attempt felt snakebit at times. In February 2017 she suffered a crash while training and broke a shoulder blade. Later in the year she accidentally shot herself in the leg (!) at a competitive shooting event—a faulty after-market product caused her to handgun to discharge, she said—and miraculously escaped serious injury.

Riding a bicycle in the slipstream of a vehicle has obvious wind-cutting benefits. At high speeds, air rushing off the vehicle can also create an air pocket that pushes the rider forward—a phenomenon known as the Von Karman effect, after the Hungarian physicist Theodore von Kármán.

Mueller-Konorek was coached by John Howard, the 71-year-old American cycling legend and Olympian who at one point held the land speed record himself at 152 mph. Howard coached Mueller-Korenek when she was an up-and-coming teenager competing at the world class level, then reunited with her later in life when Mueller-Korenek began competing again. It was Howard who first suggested his former protégé take on the speed record.

“This time, it all came together,” Howard said. “It was the culmination of all the work and energy.”