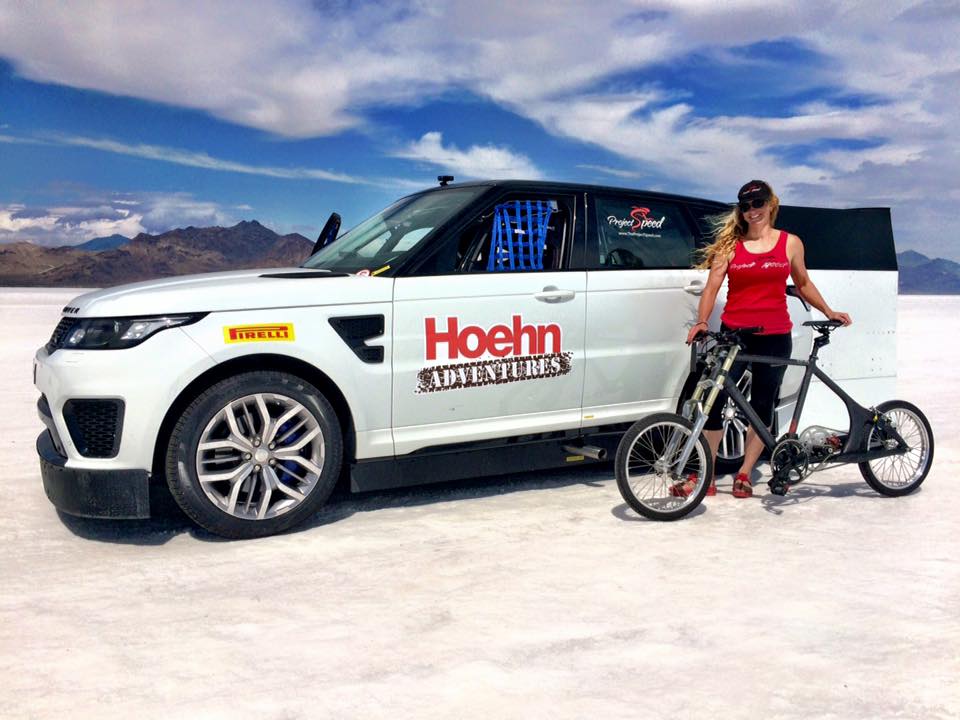 American cyclist, Denise Mueller, is hoping to break the fastest paced bicycle Land Speed Record this weekend – under the banner of Project Speed.

Mueller, who is the current US Women’s Masters Criterium Champion, will be making her attempt at the Bonneville Salt Flats in Utah.

Mueller’s attempt has been four years in the making, not the least of which has involved a specially designed bike and pace vehicle, which will be driven by Shea Holbrook, who happens to be one of the US’s top female drag racers.

“I have been asked that by a couple of people over the years, and the first and easy answer is, why not, right?

“But really, how many chances do you get to be the first person ever to be able to do something as a female? Men have done this record since 1899, and a woman has never even tried to do this record.

Holbrook, who’s driven a dragster at speeds upwards of 280 mph, says her role “is to keep Denise alive, honestly”.

“Everything that I have been taught, I have to reverse because we are going to be accelerating at a slow rate of speed.”

The bike Mueller will be riding was designed by San Diego-based SD Wheel Works specifically for the record attempt.

“The frame is elongated for stability and utilizes a ‘short travel’ suspension to dampen high speed vibration,” and has “a steering stabilizer to eliminate any speed wobble at high speeds.”

“It also has double reduction gearing and drivetrain “to allow Denise to pedal the bicycle at a rpm that allows her to provide the necessary power to achieve 168mph.”

The record attempt almost didn’t happen. When the trio went to Bonneville in August to test, the Range Rover failed the tech inspection because it didn’t have the safety modifications required by the promoter. Hoehn Motors made the required changes, and Mueller and Holbrook tested over Labor Day weekend while the track was closed. Holbrook calls those “rebel runs,” and there’s no official timing.

“Going for this record … is complicated, which is probably one of the reasons it’s been a long time since it’s been done,” Mueller said. “And it’s a little crazy. It’s a little Evel Knievel-ish, because it’s such a high speed. There aren’t too many people that are willing to go through all the hoops and then really have the sort of guts to be able to do something of this nature.”