20 Sep 2015
By Gianni Pericolo - In LATEST ARTICLES, THE GREAT RACE

BMC Racing defended its team time trial gold medal at the world championships in Richmond, Virginia today, after Taylor Phinney drove his team home to knock Etixx-QuickStep from the top of the podium.

In the end, BMC covered the 38.6 kilometer course in 42:07 seconds, beating their Belgian rivals by 12 seconds.

Meanwhile, Movistar finished in 42:38, to capture the bronze medal.

“It’s kind of hard to process,” said Phinney, who missed the worlds last year while recovering from a career-threatening crash at the U.S. road championships. “It’s been kind of a rollercoaster the past couple of years. To win with the team is fantastic.”

BMC was fast right from the start at Lewis Ginter Botanical Gardens, posting the fastest time at each of the three intermediate checkpoints. But their advantage was a scant 6 seconds over Etixx-QuickStep, as they made their way up the final tough climb to the finishing straight.

With the finish line in sight, Phinney took to the front with fierce determination.

“This was a huge goal for us as a team,” Phinney said. You could have asked me a month ago if I was going to be here, the team trial world champion — it’s surreal, man.”

In the meantime, Team Sky, one of the top medal contenders, made the start after a crash in training yesterday, which left three riders with injured.

Indeed, Danny Pate was seen wearing heavy bandages on his right elbow and knee, while Elia Viviani dropped off the pace line early with an ailing knee.

In addition, Tinkoff-Saxo’s podium hopes were dashed, when Michael Rogers and Michael Valgren touched wheels and went down hard. They eventually remounted and finished the race, but the incident cost them a top 10 finish.

However, the battle for the bronze medal between Movistar and Orica=GreenEDGE unfolded much differently, with the Australian team starting out strong but fading near the end, while the Spanish team drove home the pace in the closing kilometers – to claim third place. 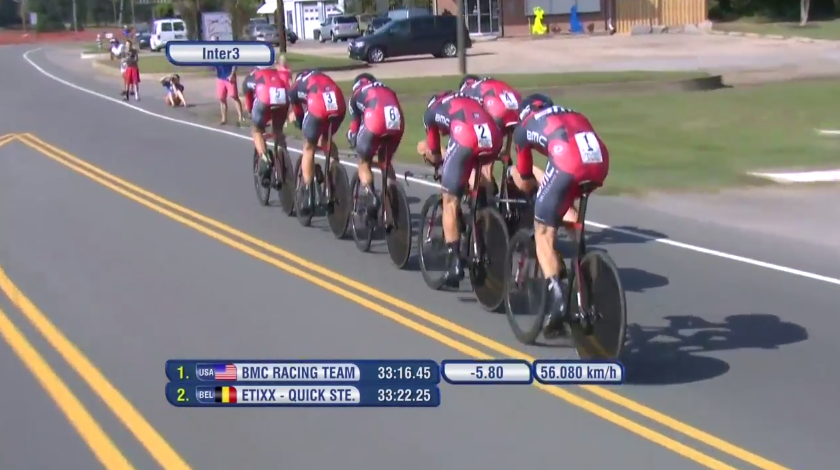