You’re Training Too Hard for Criteriums – Here’s Why 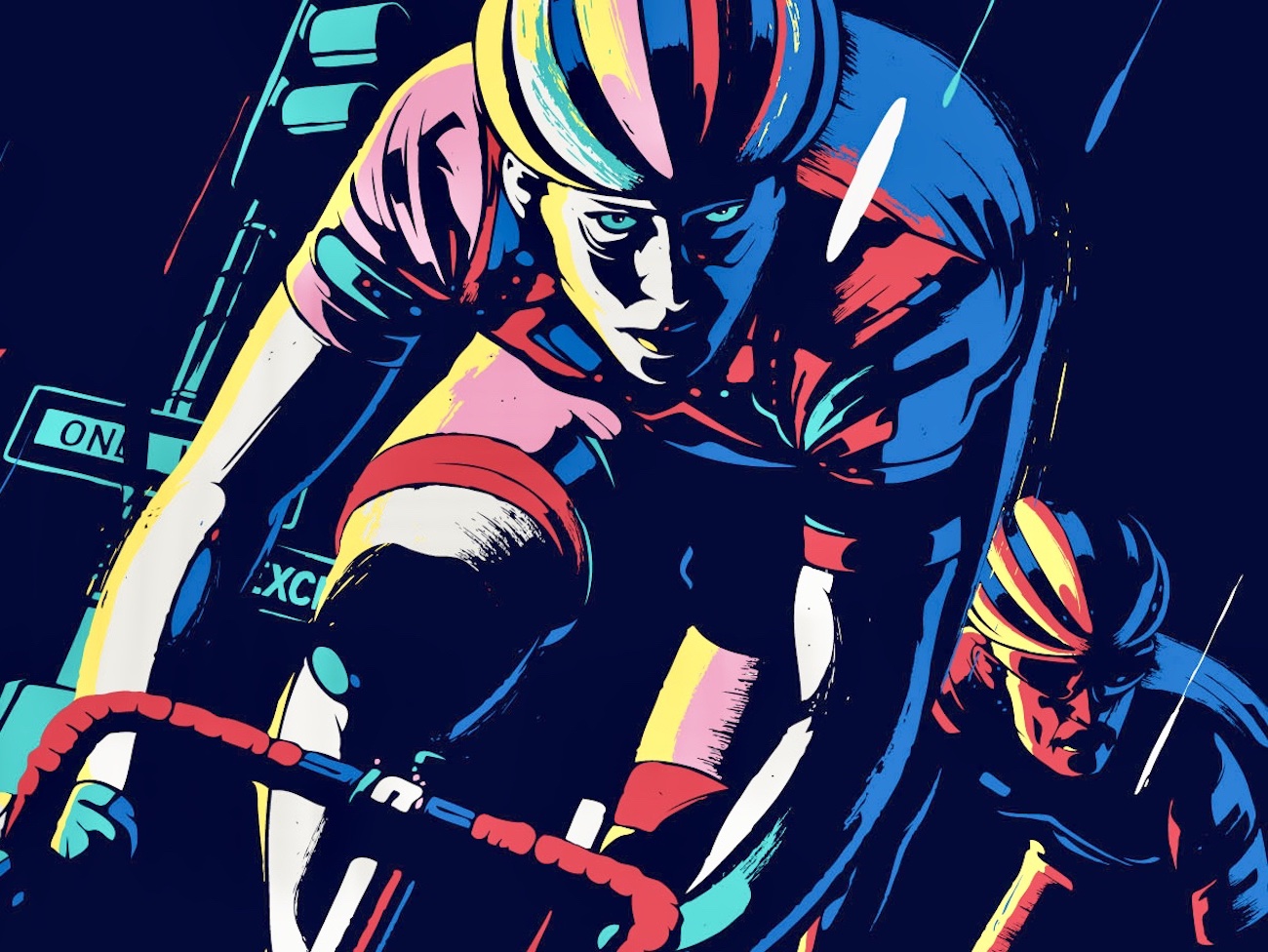 Criteriums, even before the final sprint, involve hundreds of high-power efforts. Whether you’re accelerating out of corners, jostling for position, or going after primes, there’s no doubt that criterium racing (and similar disciplines, like cyclocross) require significant power output.

This traditionally makes for a long season of training that mimics these high power demands—but if done in excess, these efforts can actually lead to negative adaptations and even burnout. Furthermore, there are other training methodologies that promise better results without undue stress on your body.

So what’s the best way to train for the repeated sprints you’ll encounter in a season of crit racing?

To answer this question we will first discuss the common techniques and pitfalls of traditional specific criterium power training. Then we will look at the biochemistry of a sprint, and why traditional sprint training plans might not actually be working with your physiology. Finally, we’ll review some often-overlooked training factors that will allow you (or your athlete) to become a more consistent, healthy and powerful criterium rider.

Most traditional criterium training can be categorized under HIIT (high-intensity interval training). This involves repeated maximal efforts with rest intervals in between. In scientific literature and among athletes, HIIT is also known as repeated sprint training; among HIIT experts these terms have degrees of nuance, but for our purposes in this article we’ll consider them interchangeable.

A typical day of repeated sprint training involves 4-6 sets of 15 seconds all out, followed by 15 seconds coasting or easy pedaling repeated for five minutes—sometimes known as “15/15s”. Variations on this theme are 30/30s, 40/20s or 20/10s. HIIT sets of 2-8 minutes increase anaerobic capacity because of their maximal nature, and can also increase VO2max.

Make no mistake, these are all great workouts to increase criterium performance and repeated sprint ability (RSA), but let’s take a look at what happens when they’re over-prescribed.

The High Cost of High Intensity

The intervals outlined above come with a greater physiological cost to your body than can be measured by your power meter. Consistent training at this intensity demands significant recovery time and, in most individuals, reduces endurance capacity and fatigue resistance. If done with enough frequency while ignoring sufficient rest, they can also quickly lead to overtraining.

HIIT intervals to train RSA, whether with short or long rests, train the body to rapidly deplete glycogen stores, (in other words, they train anaerobic capacity). And while this kind of training can give a fresh athlete an impressive power output, without an aerobic base that output will decline by the end of a race—when it’s needed most.

One of the most common problems competitive cyclists experience is being unable to produce their best performances at the end of a race. This is directly due to either a natural or trained tendency to plow those glycogen stores early in a workout; low glycogen stores decrease all power output, including sprint power (reference 1). Simply put; the more anaerobic (glycogen-fueled) power you have, the less likely you are to have your very best efforts at the end of a race.

Below is the power output for a criterium racer in a mid-season race. He spent most of his workouts during this season doing short, high-intensity intervals, but you’ll see that through the course of this race he loses 0.9 watts per minute for an average 38-watt loss in this 42-minute criterium.

Understanding the best approach to criterium training involves some biochemistry, which we’ll get into in-depth next. To keep matters simple we’ll focus just on sprint power in the 1-15 second range, and how you can get to the final 200 meters with your best sprint still in your legs.

The Biochemistry of a Sprint

Coaches and athletes are generally aware of creatine phosphate (or phosphocreatine, denoted as PCr), the critical energy source used during sprinting—but they may not be aware of how creatine phosphate supplies sprint power, and how it’s regenerated between sprints.

ATP (adenosine triphosphate) is the energy currency used to make muscle cells contract; once used it becomes ADP(adenosine diphosphate). During exercise, ATP levels can drop 50% or more. Furthermore, a hard sprint can deplete a muscle’s ATP stores in seconds, but it takes minutes to recover—which limits the consistency of your sprints.

To regenerate ATP and keep the energy flowing, an enzyme called creatine kinase shifts a phosphate from an available phosphocreatine onto an ADP. The result is ATP and creatine (denoted as Cr). PCr, in other words, is critical in helping generate energy for muscle contractions.

The creatine kinase enzyme makes the same reaction happen both directions (see diagram below), but the direction it proceeds depends on the concentration of PCr, Cr, and ATP. When a muscle is not active, levels of PCr and ATP will be high and Cr will be low—which is just how creatine kinase likes it. When we sprint, creatine kinase immediately starts using PCr to maintain ATP levels in the cytosol, or the main cell compartment.

At the start of each spike in a power file, ATP and PCr levels fall. Even if the power is not your highest and it doesn’t feel demanding, it’s the sudden need for ATP that ensures depletion of ATP and PCr. The repeated sprints required for criterium or cyclocross racing would typically prevent reconstitution of PCr, because the demand for ATP is too high—but your cells create the right conditions to resupply PCr (and therefore ATP) by using mitochondria.

Mitochondria are energy-producing organelles inside the cell, and they have two membranes; ATP is created aerobically in the innermost one. Between the two membranes, ATP concentration is high as it makes its way to the working muscle. To recreate PCr, the cell moves Cr from the cytosol (the inside of a cell) into that space between the two mitochondrial membranes, creating the perfect conditions to make new PCr: high ATP and high Cr. The newly reconstituted PCr is sent back into the cytosol—so you can sprint again.

What Does All this Mean for Your Sprint?

The aerobically-created supply of ATP in your mitochondria comes with metabolic fitness. That’s why athletes with the most consistent repeated sprints are those with a well-trained functional threshold power (FTP). Unfortunately, exercise scientists are not investigating this relationship as much as they could, due to a focus on VO2max rather than lactate threshold.

Doctoral research by Christopher Irvine determined that the primary system used during recovery from HIIT intervals was oxidative phosphorylation (reference 3). Some work has been done in ice hockey players (reference 2), which found a much higher correlation of VT2 (ventilatory threshold 2, similar to FTP) and RSA than VOpeak and RSA. In other words, to consistently and repeatedly sprint over a long duration requires the same chemistry as maintaining a high overall FTP.

During the base and build phase for criterium-focused athletes (and other disciplines like cyclocross and MTB), we do very little crit-specific training. If there are no races during these phases, we’ll add in a handful of form sprints every week or two for the two months leading up to racing, just to refresh muscular coordination.

For all-rounders and aerobically strong cyclists whose goal races are criteriums or cyclocross, I program three weeks of true HIIT and RSA-focused training before their first race, and no more. This seems to be the balance point between increasing anaerobic and sprint power without sacrificing the aerobic ability needed to support repeated sprints. For the more natural sprint and anaerobic cyclists, I suggest even less criterium specific training.

During periods of frequent racing, all of my athletes avoid HIIT and RSA workouts. The more their races demand these types of efforts, the more important it is to keep them rested; as noted above, high-intensity work is incredibly stressful and requires extra recovery time.

This might sound like excessive rest, especially compared to some current training methodologies, but in my experience coaching, more recovery is better when it comes to consistent sprinting performance. The case study below illustrates this point.

I began coaching an athlete mid-cyclocross season whose coach had him doing HIIT work during race blocks. He typically had no more than two days of recovery between his high-intensity interval training and races (which were twice per weekend and sometimes during the week). This had gone on for six weeks. Unsurprisingly, his power outputs were dropping for both workouts and races; and his finishing place and ranking points were falling too. I was shocked that his coach was continuing to push hard workouts through goal races instead of allowing recovery.

We salvaged his form by first giving him rest, then getting him doing steady state sweetspot workouts during the week, 2x20min or 3x15min, and getting him to ride his weekly cyclocross practice session as technique work and not for digging deep. It took about three weeks but he finally started feeling good again, and went from averaging 40th place out of 80 riders to coming in top 10 or 20 in even larger fields (up to 130 riders), an increase of about 100 ranking points.

When one of my athletes won a national criterium championship, the questions my friends and consultees asked about her training all had a common thread: she must have done a lot of high-intensity training, right? The honest answer was no; besides racing she did no specific anaerobic or sprint training.

I stated above that those with the most consistent (not the highest power output) repeated sprint ability are the best aerobically trained. To see proof, look at some power files from another elite female road cyclist:

The first file contains many short, high-intensity sprints. The second file shows fewer high peaks but more consistent bouts of pedaling at an anaerobic intensity of about 20 seconds. Two characteristics stand out in both files. First, that I had to re-label “Power Loss” in the upper right-hand corner as “Power Loss Or Gain” because she loses no power over the course of either race! In criterium 1 she gains 0.76 watts per minute, and in criterium 2 we see a gain of 0.08 watts per minute.

How can you recreate this kind of consistency in your own training? Keep these simple guidelines in mind.

HOW DO YOU FEEL?

Despite what CTL or ATL may say, they often don’t line up with what kind of shape someone feels they’re in. If you’re a coach, your most frequently asked question to all your athletes should be “How are you feeling?” Watch the subjective feedback entries carefully. They’re as important to becoming a fast athlete as understanding physiology.

Racing especially can provide anaerobic and sprint stimulus for any athlete, to the point that you may find it reasonable to forego scheduling these types of intervals all together. Talk to your athlete, watch his or her power outputs on race days, and figure out what works for them individually. Doing twice the intervals does not mean you get twice as strong.

The more often someone digs deep while racing or training, the longer it will take for them to recover. Despite the glorification of suffering that cycling is known for, when there are problems, the solution is almost never more training. The “cult of suffering” mentality is fine—just so long as we equally glorify the “cult of recovery.”

For a more in-depth discussion on this topic, you can listen to the Empirical Cycling podcast episode.