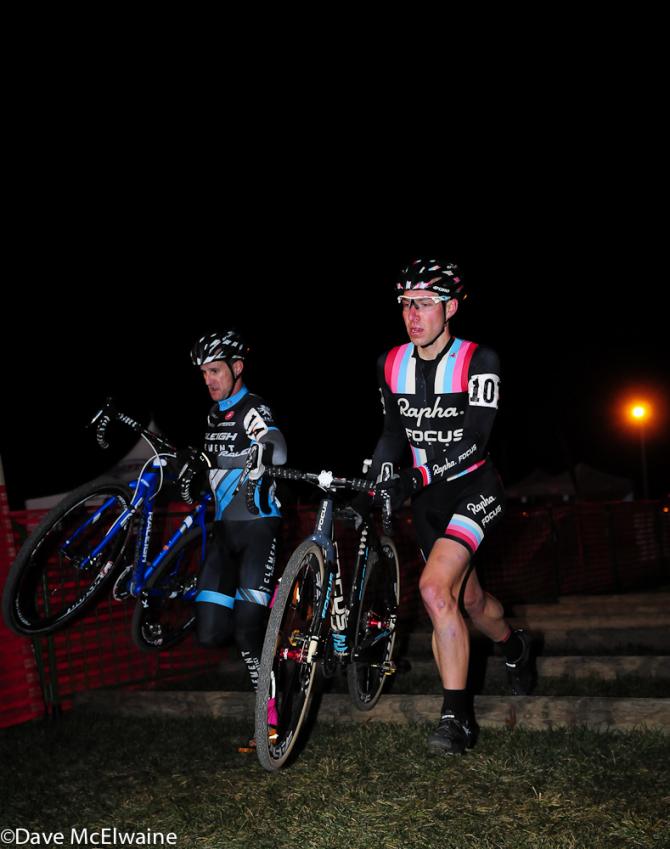 The duo separated from the main field early in yesterday’s race – ultimately creating a two man battle for the duration.

“It was nice to get off the front, get out of trouble, and have a little battle between Ben and I. I felt like I was in control of the race for the whole time. and that’s something I’ve been working on the last two weeks,” Powers said.

Ben Berden got the race off to a fast start, however, he was quickly overtaken by Tobin Ortenblad  – who led the race for the first lap. That did not last long however. Once Berden became familiar with the course, he subsequently initiated an attack with Powers in tow. From there, the two quickly established a significant gap. And, with the exception of Jeremy Dunn, who managed to join them briefly – it was the last the main field saw of the duo.

“We were evenly matched,” said Powers. “I felt like I had a little bit of an advantage in the corners, and then Ben is so good in the sand that was hard.”

As Berden and Powers solidified their lead, the race for third place ensued. The main chase group, which included Jamie Driscoll, Robert Marion,  Brian Matter and Shawn Milne,  sat about 25 seconds behind the leaders. Driscoll manage to escape from the chase group – and secure third place with two laps to go.

“I was able to recoup myself, and then hit it when it counted in the last lap or two,” said Driscoll.

On the last lap, Berden and Powers remained attached until the two riders entered the sandy bullpen section of the course. Powers emerged with a slight advantage and increased his lead by another few seconds during the final twists and turns.

“With a half lap to go, he just went two miles faster than me,” said Berden. “I had to let him go.”

Powers took the win just ahead of Berden, while Jamie Driscoll finished third with Brian Matter and Robert Marion finishing up in fourth and fifth place.

Katerina Nash won the first round of the elite women’s 2013 Jingle Cross Rock series – after battling it out with hometown favorite Amanda Miller yesterday.

Nash ultimately got a gap on Miller in the final lap to seize the victory.

“It was a good opener, it was hard,” said Nash about the popular night race. “Those guys definitely were super strong, Meredith and Amanda. I had to push it really hard on the last two laps to get a little bit of a gap, and get away from Amanda.”

The inclusion of the steep Mt. Krumpit  and the sandy bullpens proved to be the decisive sections of yesterday’s race.

Nash was the first to make a move – taking the hole-shot. However, Meredith Miller quickly got onboard with her. As the field tackled Mt. Krumpit for the first time, Nash gapped the field, forcing a select group of riders containing Meredith Miller, Amanda Miller, Courtenay McFadden and Nicole Duke to chase in earnest.

With two laps to go Amanda Miller and Nash were successful in shedding the rest of the lead pack – as they ascended  Mt. Krumpit again.

“I hate to run, especially uphill,” joked Amanda Miller. “I have some bulging discs in my back, and I figured running uphill would aggravate them, so I used that as motivation to ride it.”

Nash pulled ahead of Miller as they accelerated through the bullpens – toward the end of the penultimate lap.

“I was having some trouble in the barn with the sand,” said Miller. “I couldn’t ride it. I should have just run it, and it would have been faster for me. I would have been able to stay with her maybe.”

Nash began to steadily pull away from Miller during the final lap – creating a seven second between them. From there, Nash was able to cruise to victory over Amanda Miller.

Behind the two leaders, Meredith Miller finished third – followed by Courtenay McFadden in fourth and Catharine Pendrel in  fifth.