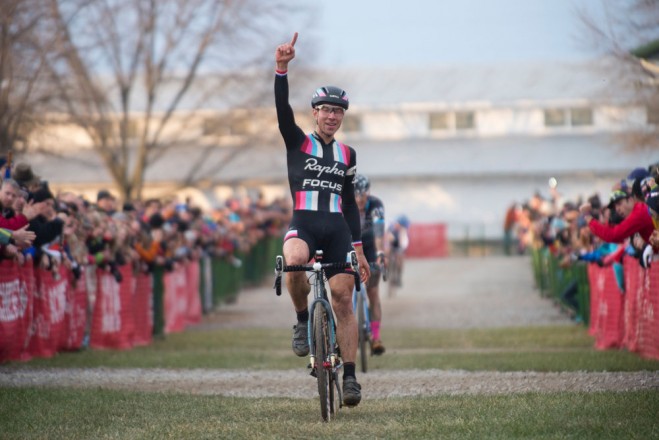 Jeremy Powers won day 2 of the 2013 Jingle Cross Rock series – with an attack in the final lap that successfully held off a contingent of rivals such as Ben Berden, Adam Craig, Tim Johnson and Logan Owen.

“Today was good, it was just a matter of being patient,” said Powers.

“Tomorrow (Sunday) is obviously the big day, and I definitely felt last night in my legs a little. I said to myself, if I could be at the front still with 10 minutes left, I’d put it all in.”

Tim Johnson livened things up at the start –  leading the field through the first half of the course. However,  Adam Craig took over at the start of the ascent up Mt. Krumpit.

“The finish down to the barn was scary,” said Craig. “I almost bought the farm there on one of the laps.”

“Throughout the race somehow, Tim and I would both get a gap,” said Owen. “Finally I started capitalizing on it, started to attack, and put the sting into them.”

Despite a lot of "expanding and contracting" in the lead group, today’s event saw a core of riders remain together for most of the race.

It wasn’t until the finishing lap – that Powers attacked and subsequently created a gap that would hold until the end of the race.

“That was enough to break the rubber band.”

In response, Berden, Johnson and Craig took up the chase, but were unable to close the gap.  Powers cleared the top of the climb with a four-second gap over Ben Berden and kept the  lead all the way to the finish. Berden successfully held off Craig  to take second place, with  Johnson in fourth, and Owen in fifth.

“This is definitely a Belgian style, or Euro style course, where you have some significant climbs,” said Powers.

“A lot of the tracks that we do have small hills but they don’t have sustained climbs like this. This is definitely strong man territory.”

Katerina Nash swept the women’s race for the second day in a row – beating teammate Catharine Pendrel and Elle Anderson by more than ten seconds.