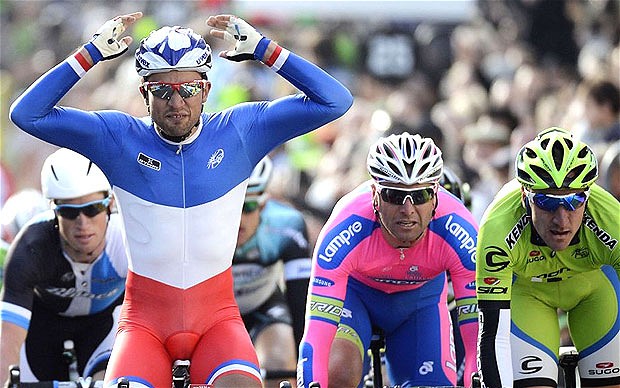 Nacer Bouhanni rode to victory today – winning stage 2 of the 2013 Tour of Beijing.

The French rider proved to be too fast for Roberto Ferrari and Mitch Docker in the final sprint in Yanqing.

Today’s win not only marked the 23-year-old’s 10th victory of the season, but it gave him the overall race lead as well.

“It was difficult but I had a good team around me to help me get back after each climb and Dominque Rollin was very helpful in the final,” said Bouhanni, who does not expect to hold on to the overall with more climbing on the agenda tomorrow.

“The victory at Paris-Nice was certainly a big victory, I got the yellow jersey but this one is a good victory,” he continued. “Any victory is good to take.”

At 201.5 kilometers, today’s route was the longest stage in this year’s Tour – with plenty of attacks occurring from the outset.

Indeed, in the first 500 meters, Thomas De Gendt rode clear of of the main field, and was soon joined by Massimo Graziato, Chad Beyer, Olivier Kaisen and Maxime Bouet. With no countermeasure from the peloton, the quintet was able to build up a substantial gap of 5 minutes.

As the escapees made their way toward the first two climbs, De Gendt, along with Beyer, showed their climbing prowess, with De Gendt claiming the maximum KOM points.

However, after the final climb of the day,, cracks began to appeared in the breakaway group, with their lead being reduced to 2:30. In fact, at one point, Kaisen and Bouet had opened a one minute gap of their own over their companions – with Graziato being dropped altogether.

The breakaway group was finally caught in the remaining 10 kilometers. And, in the last 2 kilometers Argos-Shimano led the charge toward the finish line, followed by Omega Pharma – Quick-Step and FDJ.

While the teams were all vying for position, Orica GreenEdge’s Luke Durbridge managed to make his way up through the center, along with the team’s sprinter – Cameron Meyer. Lampre-Merida made it to the front as well – setting up Ferrari. However, the Italian proved to be no match for Bouhanni’s speed.