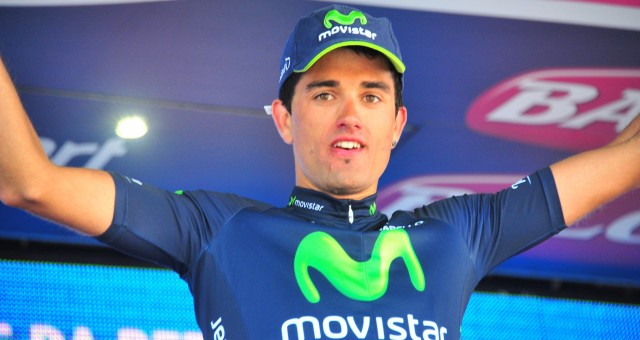 Benat Intxausti has been crowned winner of the 2013 Tour of Beijing, finishing safely in the peloton  during the final stage, while Luka Mezgec won today’s race – marking his first WorldTour victory.

“I’ve been waiting a really long time for this and today I succeeded,” the young Slovenian said following his win. “The first stage I was really close so I knew I could win here. Today it happened.”

Intxausti was untroubled over the final 117km stage, and paid tribute to the team effort which saw the blue train of Movistar drag back the almost-day-long break.

“I’m very happy with my whole season and above all, to put a finishing touch to the team’s season,” the 22-year-old Spaniard said.

“It’s a very nice win and it gives me encouragement for next season. “I said yesterday that this victory was the result of work and good team environment, I thank you for what you have done for me and I congratulate all the people who support me. Now enjoy playing on the podium, the final dinner with colleagues and morning and after the trip, relax and take a vacation.”

Today’s stage began from the "Bird’s Nest" stadium located in Tian An Men Square in the center of the Chinese capital.  After a number of attacks early on, a breakaway group consisting of two of the retiring members of the peloton, Juan Antonio Flecha (Vacansoleil-DCM) and Marco Pinotti (BMC), along with Olivier Kaisen (Lotto Belisol), Manuele Boaro (Saxo – Tinkoff) and Christian Meier (Orica GreenEdge) to form the day’s break after 15km of racing.

As the race hit the 12-lap finishing circuit around the Olympic precinct, the breakaway had earned a 42 second advantage, making Pinotti being the new virtual leader by a meager second. The Italian veteran took honours on the first of three sprints, trailed by Flecha, Meier and Kaisen with the escapees holding an advantage of 1:09 with 10 laps to go. Pinotti said that it was an emotional day out on the road.

“Today I tried to be in the breakaway,” he admitted at the finish. “We started fast and I thought I couldn’t go and then I saw Flecha and guys going – Boaro made a hard effort to come back and once we had five riders we set up pretty nicely. It was the best way to finish. “We knew it would be tough to finish in the breakaway, but it was a good day.”

The quintet’s largest gap of the day came with just over five laps remaining, the peloton trailing by 1:43 before steadily being brought back. Argos-Shimano led the charge over the final three laps, with Cannondale, Omega Pharma-Quick-Step and Movistar also featuring at the front of the chase. With the writing on the wall, Meier was prepared to go for broke in the final lap, determined to hold on to any small advantage, but the Canadian rider’s efforts were in vain with the break finally caught with four kilometers left to race.

Two-time winner of the Tour of Beijing, Tony Martin (Omega Pharma-Quick-Step) earned a small gap on the peloton before Belkin, Movistar and Lampre-Merida all came to the front of the bunch. In the final kilometre, FDJ.Fr attempted to set up Bouhanni for a third stage victory but it was the Argos-Shimano train which timed its run to perfection.

“The first day was quite good,” explained Mezgec. “But today every single guy did his own job in a perfect way. We ran out of one guy in the finish but Tom Veelers did a really good job with a long lead out, I waited a little bit and started behind Bouhanni and then I passed him.” In the Classifications,

The team classification was awarded to to BMC, while a strong performance by Movistar to be the second team overall should see them overtake Sky Procycling at the top of the UCI WorldTour rankings for 2013. And finally, in a new tradition for cycling worldwide, Hayden Roulston (RadioShack Leopard) won the POM (Panda of the Mountain) for the first past the line on Panda Corner on the third stage of the race.