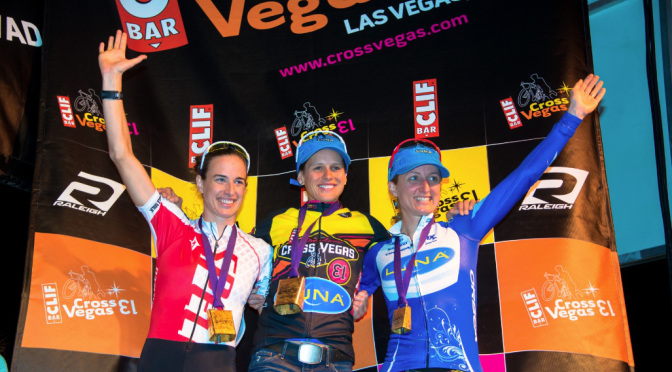 The organizers for the 2014 Clif Bar CrossVegas event have announced what’s shaping up to be the strongest women’s field in the race’s 8-year history.

Squaring off at Clif Bar CrossVegas will be the number 1 and number 2 ranked riders in the world, Katie Compton of the U.S. and Helen Wyman of Great Britain.

The women’s field will be competing for a prize list equal to the men’s field with almost $9,000 in cash plus valuable UCI points as a result of the Category 1 status of the race. In addition CrossVegas is part of the season long U.S. ProCX Calendar awarding $40,000 in prizes. Women from 6 nations competed in the 2013 version of the race at least that many nations expected for this year.

Compton, ranked number 1 in the world standings, is the overall winner of the World Cup and a two-time winner of CrossVegas. The Trek Cyclocross Collective rider returns after an absence of several years. “I’m looking forward to starting my season in Las Vegas this year. I’ve skipped this race in previous years to delay the start of a long season but decided I couldn’t miss it again,” Compton commented.

Compton went on to say, “I’m sure this year will be super hard with fast competition from the mountain bikers coming off their world champs as well as true cross racers dialing it up for the early season. I look forward to some suffering and being cheered on by some creative hecklers!”

Wyman is currently ranked number 2 in the world standings following a stellar 2013 season that included a silver medal at the World Championships and a win in the European Championships. Wyman commented on her plans, “I’m really excited to be racing in Las Vegas in 2014. CrossVegas is a standout event on the world calendar.”

Team LUNA Chix brings their usual dominating strength to CrossVegas including Katerina Nash of the Czech Republic. Nash has taken a podium spot every time she lines up at CrossVegas with 3 wins including 2013. Joining Nash will be teammates Catharine Pendrel of Canada who was 3rd in 2013, Georgia Gould of the U.S. who is always among the top finishers, Teal Stetson-Lee and Maghalie Rochette of Canada who was 10th in her first CrossVegas in 2013.

Other notables vying for a win under the lights of Las Vegas will be: