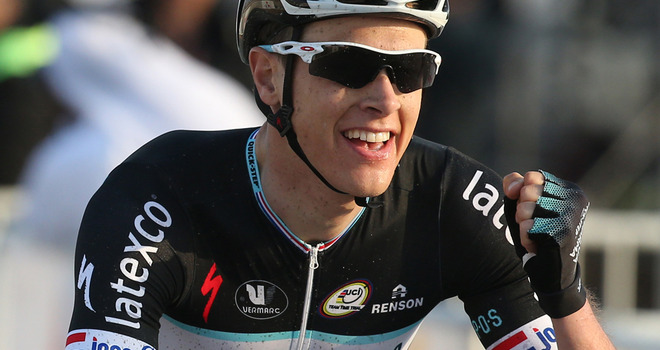 Niki Terpstra won this year’s Dwars door Vlaanderen with a solo victory in Waregem, Belgium today, after attacking on the climb of the Paterberg with 30 kilometers remaining.

Meanwhile, Tyler Farrar and Borut Bozic finished in second and third place respectively – at 19 seconds behind.

Today’s race didn’t see a breakaway group emerge until after an hour of racing, wherein a substantial group of 21 riders eventually managed to ride clear, and subsequently build up a gap of three minutes over the field.

Unfortunately, back in the peloton, Orica-GreenEdge and Movistar were two of the teams who missed the break, and consequently had to do most of the work in order to keep the escapees under control.

As the race approached the climb of the Eikenberg at the 58 kilometer mark, the Garmin-Sharp team began upping the pace, which quickly served to reduce the breakaway group’s lead to roughly one minute.

From there, the breakaway group briefly split apart, as Alejandro Valverde drove the peloton from behind.

As the leaders headed into the climb of the Taaienberg, Kenneth Van Bilsen led the breakaway, while Tom Boonen assumed leadership of the peloton from Valverde.

Upon approaching the climb of the Oude Kwaremont, the gap  between the peloton and the lead group, which at that point had been reduced to *eight riders, fell to just half a minute.

With 35 kilometers remaining, Ian Stannard, along with Terpstra succeeded in closing the gap on the final eight riders, as the race approached the short, steep climb of the Paterberg.

As the field crested the top of the Paterberg,Terpstra attacked – quickly building up a sizable gap over the field. And, despite attempts by the Trek team, the Dutch rider continued to increase his lead up to half a minute.

With 20 kilometers remaining, Devolder initiated an attack on the climb of the Vossenhol, with Nicki Sørensen (Tinkoff-Saxo), Gert Steegmans (Omega Pharma-Quick Step) and Alejandro Valverde (Movistar) fast on his wheel.

However, despite their efforts, the four-man chase group was unable to close Terpstra’s gap, as they were soon swept up by the peloton in the final 1.5 kilometers. Meanwhile, the Dutchman proceeded to cross the finish line in a solo victory.