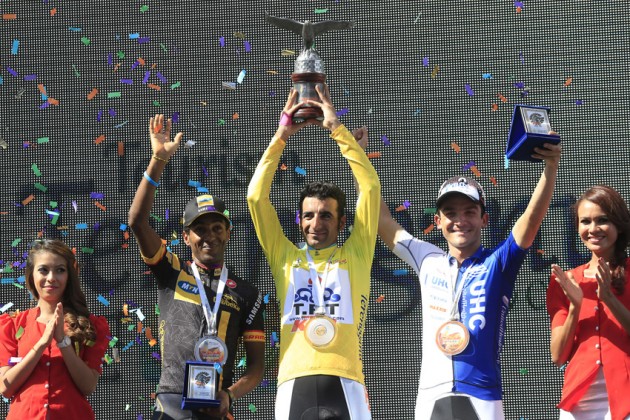 Pourseyedigolakhour held onto his lead for six days, to beat Merhawi Kudus  by a mere 8 seconds.

"I am especially proud to be the first Asian rider to win the overall title in this race. After 19 years it has happened, so this is a big victory for me and for Asian cycling," said Pourseyedigolakhour, who also became the first Asian to win the Genting Highlands stage.

"After the fourth stage in Genting, my team had to work really hard to protect the lead, especially in some very long stages that followed. So, I have to thank them."

Aidis Kroupis of the Orica-GreenEDGE team won the points classification  jersey after finishing second to Guardini in today’s sprint in Dataran Shahbandar in Kuala Terengganu. In addition, today’s win marked the Italian rider’s second victory in this year’s race, which also marked Astana second team win of the season.

"This year I would have liked to get more wins, but most of the stages didn’t suit my sprints. For me, I prefer to have a long straight to start my sprint at 200 or 250 meters, but this year a lot of stages had a turn at 100 or 50 meters before the finish," said Guardini.

"So those kind of stages suited Bos, who also had a strong team to put him in good positions. Today, when I had a chance in a sprint that suited me, I am happy to have delivered the win.

Meanwhile, Matt Brammeier of the Synergy-Baku team finalized his victory  in mountains classification, after securing the title following yesterday’s stage 9.

Another team that made a big impact on this year’s race, was South Africa’s MTN-Qhubeka, who not only finished as overall team champions ahead of Tabriz Petrochemical, but also introduced the talents of the up and coming  20-year old Eritrean rider, Merhawi Kudus, who finished second overall in this year’s race.