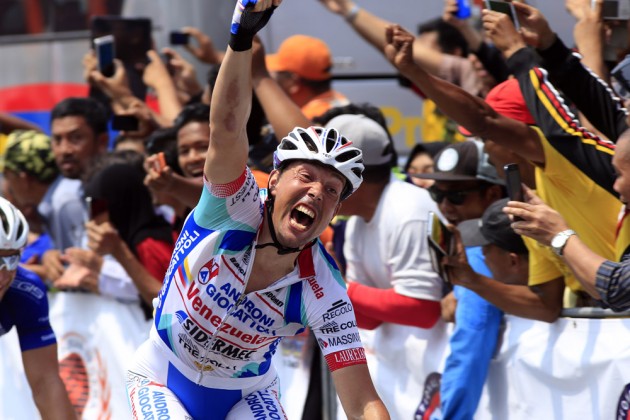 Kenny van Hummel caused a sensation when he won a bunch sprint to take top honors in Stage 6 of Tour of Langkawi today, covering 199.1 kilometers from Melaka to Pontian.

The 32-year old Dutch rider beat Orica-GreenEDGE’s Aidis Kroupis and United Healthcare’s Ken Hanson on the line, marking both his and Androni Giocattoli’s first win of the season.

Today’s stage was long, with coastal headwinds putting an extra strain on the peloton. Several breakaway attempts occurred throughout the race, however, all of them were kept under control; especially by the Tabriz Petrochemical Team in order to protect it’s race leader  Mirsamad Pourseyedigolakhour.

"In the last kilometer I was at first on the left with Andrea Guardini (Astana) but the crosswinds were making it a bit messy over there, so I decided to move to the right. Just as I moved, I saw United Healthcare were starting a lead-out, so I tagged along and found a perfect position to start my sprint," said van Hummel.

"It was a clean straight sprint. I just put the hammer down and went full speed."

Van Hummel dedicated today’s win to his team, who he credits as having saved his career after being left without a contract at the start of this season.

"I had been with Kittel and won some big races with him. But at the end of last season I was out of a contract. I really wanted to remain in the pro peloton, so I am thankful to this team now. This win is sort of a small present for them," said van Hummel.

Meanwhile, the other leaders’ jerseys all remained intact, with Mirsamad also unaffected as the Asian riders’ classification leader and Ireland’s Matt Brammeier of the Synergy-Baku team remaining in the lead of the mountains classification.

OCBC Singapore’s Thomas Rabou did just enough to remain in the lead of the points classification by taking second and first spots in the last two intermediate sprints today – collecting 48 points total to lead Kroupis by a single point heading into tomorrow’s stage 7.

The Tour of Langkawi continues tomorrow with the longest stage of this year’s event. Covering 230.1 kilometers from Kota Tinggi to Pekan, the stage is again expected to be another tough day for the peloton in dealing with heavy coastal winds throughout the race.