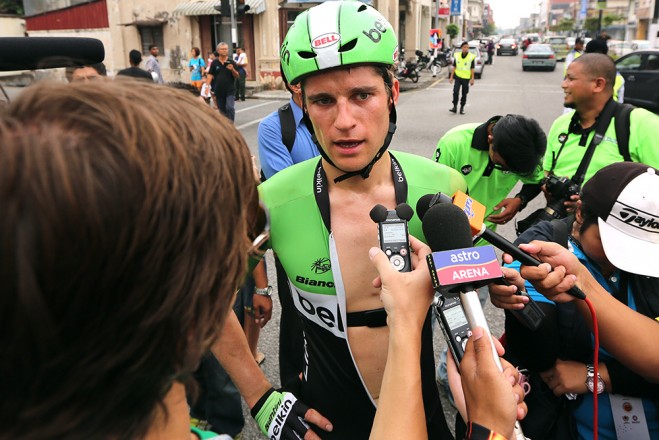 Theo Bos scored a hat-trick for himself today, after winning stage 8 of this year’s Tour of Langkawi, in a sprint finish – following 202.2 kilometers of racing from Kuantan to Marang.

"It’s a good feeling to have won my third stage this year to equal our record of three wins last year. That was our target," said Bos, who also won Stage 2 and Stage 7 to bring his personal tally of LTdL stage wins to five.

Today’s win also marked Belkin’s sixth ever in LTdL, with Bos delivering all but one of those victories.

"We have two more stages which are flat and we have the opportunity to look for more wins, so we will see how it goes."

Today’s crash involved race leader Mirsamad Pourseyedigolakhour of Tabriz Petrochemical. However, the Iranian rider’s overall lead was  unaffected, as the crash took place inside the final 3 kilometers, and, therefore all riders were afforded the same finish time as the peloton.

Pourseyedigolakhour has two more days to go – to emerge the first ever Asian winner of the Tour of Langkawi title.

Meanwhile, Synergy-Baku’s Matt Brammeier is likely to seal up the  mountains classification jersey, should the Irish rider mange to hold onto his position after tomorrow’s stage.

In the meantime, Aidis Kroupis of the Orica-GreenEDGE team remains in the lead of the points classification jersey, just two points ahead of Michael Kolar of Tinkoff-Saxo and nine points ahead of Bos.