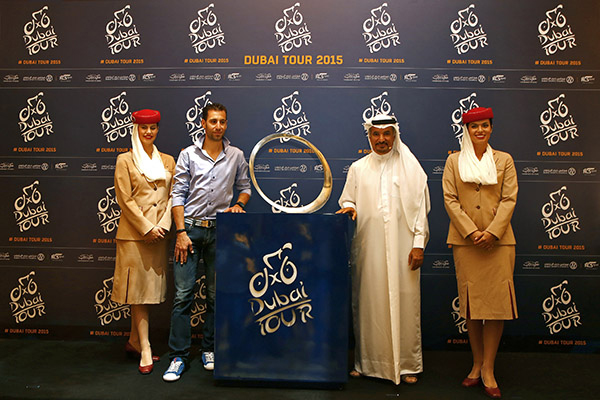 After the great success in 2014, the UAE’s Dubai Tour will return, being held from the 4th – 7th February.

Upgraded UCI category, 4 in line stages with no time trial and a climbing finish.

Guest of Honour Vincenzo Nibali who will start his season with his team in 2015 at the Dubai Tour.

Commercial Bank of Dubai is the new top sponsor of the race and of the general classification leader’s blue jersey.

Dubai, 10th November 2014 – The 2015 edition of the Dubai Tour was presented today in the amazing scenery of Dubai and in the exclusive location of Westin Mina Seyahi Hotel.

The race, which is organized by the Dubai Sports Council in partnership with RCS Sport, established itself on the international cycling scene in 2014 and has already gone to another level, with cycling’s governing body, the UCI, promoting the Dubai Tour, upgrading it from 2.1 to 2.HC, the second highest category.

This change highlights the quality of the race and allows a greater number of the elite UCI WorldTeams to race at the event.

16 teams of 8 riders will start the Dubai Tour. The inaugural, 2014 edition general classification was won by the American BMC rider Taylor Phinney, with three stages ending in sprints, with Marcel Kittel holding off Mark Cavendish and Peter Sagan to take all three.

This second edition of the race will be held from February 4th until February 7th, with some changes to the course: no time trial stage will be held, a hill climb finish has been added and the total distance raced increases by 60%, from 418km in 2014 to 663km in 2015.

The Dubai Tour is a stage race divided as following:

They will be three flat stages with potential bunch sprint finish and a hilly stage with medium difficulty climbs and a final tough climb.

All stages start from the Dubai International Marine Club, finishing each time in a symbolic location for Dubai.

Stage 1 – Starting from the Dubai International Marine Club, heading south to reach Jabal Ali and crossing the area where Expo 2020 will be held. Riders will then face a short and twisting course through Dubai Marina and on to Jumeirah Road, where the race will enter the first of four loops of an 8.2km circuits, with riders finishing by going around the buoy and under the Union Flag.

Stage 2 – The stage is divided in two parts. The first part runs outside the city, partly in the desert, with the second taking place from Dubai Marina and ending at Palm Jumeirah. Alongside the first part, riders will pass through the Academic City, the Camel Track and the Al-Qudra Cycletrack. The second part goes through Jumeirah Islands and on to the world famous Palm Jumeirah, with a very fast finale similar to the one in 2014.

Stage 3 – Starting from the Dubai International Marine Club, racers will head towards the desert and the Hatta enclave in the mountains on the border with Oman. A few other Emirates are touched by the course (Sharjah, Ras al-Khaimah and Fujairah). After facing a series of short climbs, riders reach the finale in Hatta, at the top of the dam (Hatta Dam) after a short tough climb at of approximately 200m and a maximum inclination of 17%. The stage will take place in the stunning Hajar Mountains, an area defended throughout history by military towers, and today a major tourist attraction with their famous orange mountains. At the end of the stage, riders will have faced a total elevation of 1200m.

Stage 4 – The stage crosses the Old City, touching the Meydan hippodrome and Mushrif Park before reaching al-Mamzar and crossing Deira and its harbour on the creek. Riders then head onto Jumeirah Road and onto a very fast sprint in front of the renowned Burj Khalifa.