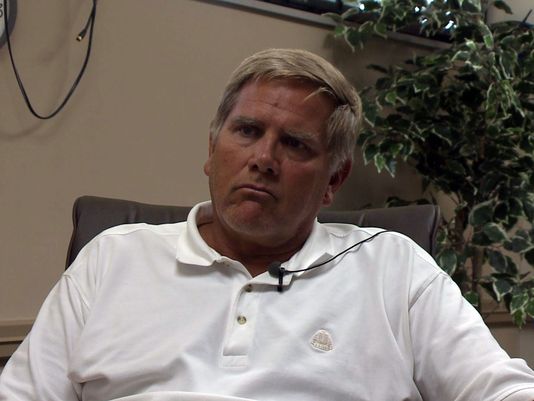 A cyclist is claiming that the mayor of Sunset Hills,. Missouri deliberately drove his car into him – ultimately knocking him off his bike. In response, the mayor claims the allegations are untrue, and insists the cyclist started it all.

The Sunset Hills Police Department is still trying to determine who is crying foul.

Randy Murdick is an accomplished cyclist, who claims that the mayor’s vehicle struck him so hard, that he was knocked to the ground.

“He literally hit me so hard it knocked the bike out from under me.”

Murdick said his achilles tendon was torn, and he was badly bruised, plus his $12,000 dollar bike was damaged.

He said that Mayor Mark Furrer pulled up next to him in his red Mercedes and yelled at him.  Murdick said “He kept hollering to get off his road.” He said the mayor then swerved into him knocking him off his bike.

From there, Murdick said Furrer then took off, and a witness in another car followed him. Furrer returned to the scene, and about a half dozen police officers arrived.

Murdick said he didn’t learn the driver of the car was the city’s mayor until after going to the police station with his attorney to demand that the driver be investigated for felony assault. He said the matter should be taken seriously and not be treated as a simple traffic accident.

In contrast, Mayor Mark Furrer claims that Murdick’s charges are not true, saying: “It makes me feel sick, I’d never in a million years attempt to injure anyone especially with a car.”

He said he spotted Murdick running a stop sign and told Murdick he should have stopped. Furrer said Murdick unleashed profanities at the mayor, grabbed onto his car and something happened and Murdick fell.  He said he did not try to run him off the road or told him to get off his road.

“Honestly, I’m ready to vomit,” Furrer said. “From yesterday on I’m so upset, I just feel like I could throw up because it’s so disturbing that somebody could accuse me of a road rage thing.”

The Sunset Hills police are investigating the incident, which does not please Murdick’s attorney – Michelle Funkenbusch. She said, “It’s quite shocking the Sunset Hills Police did not call in a neighbor police station or State Police or St. Louis County Police to help in the investigation of their own mayor.”

The Sunset Hills Police Chief said the mayor will not receive any special treatment.No arrests were made and the incident remains under investigation, the police chief said. It will be treated like any other case despite the mayor’s involvement, LaGrand said.

Murdick said because of his injuries he won’t be able to compete in races for several weeks. The police report could be ready as early as Friday.