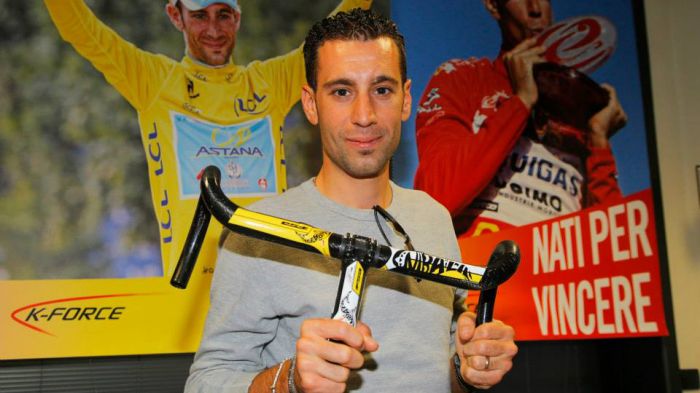 The first announcement is Nibali’s establishment of a new foundation, created to help enable access to sports for those who don’t have resources. The money raised through this foundation will be donated to the GS Mastromarco cycling team. They have a proven record of discovering great cycling talents – not least Nibali himself, who rode for the team.

The second part of the day’s presentation was the unveiling of a new logo: “The Shark”. Developed in collaboration with FSA, it will be Vincenzo’s hallmark. “The Shark” is a tribal design that includes the name of the triple champion and the colors that represent his greatest victories – red, pink and yellow, for the Vuelta a España, the Giro d’Italia and the Tour de France.

“This new logo developed with the FSA team represents all the most important victories that I have achieved in the last years,” says Vincenzo Nibali. “I am hoping that next season I will be able to add more to the list.”

The third part of the day’s announcement was a series of new limited edition components presented by Nibali and FSA General Manager Claudio Marra. They showed exclusive new handlebars, stem and seatpost, each featuring a graphic dedicated to Nibali’s Tour de France victory, along with the new “Shark” logo.

The components were created by FSA to celebrate Vincenzo Nibali and his great achievements: the K-Force range is painted in yellow with a new eye-catching graphic. Only 300 of each item have been manufactured, and will be made available to the public shortly.

Claudio Marra paid respect to Nibali: “Thanks, Vincenzo, for your force, your passion and your humanity. We decided to develop a new logo dedicated to you and your achievements.”

Finally, news was announced of involvement of important cyclists, including Nibali – and his Astana team-mate, Alessandro Vanotti, also present at the press conference – in the Cycling for Armenia (www.cyclingforarmenia.net) project. Dr Vincenzo Cassisi, director of the department for pediatric facial surgery at the Ospedali Riuniti di Bergamo, spoke about the new humanitarian project set up to raise funds for the creation of a new children’s surgery hospital in Armenia, which is supported by Nibali and his fellow riders.

“There is a lot of work to do for the Cycling for Armenia project,” said Dr Cassisi. “And it’s in this spirit that 10 cyclists: Nibali, Scarponi, Gasparotto, Vanotti, Sagan, Basso, Viviani, Pozzato, Kreuziger and Roche have already donated their autographed bikes, ready to be auctioned.”