CapoVelo.com
CapoVelo.com - - Greg LeMond: Without "Doping" Armstrong Was At Best Only a "Top 30" Rider
7872
post-template-default,single,single-post,postid-7872,single-format-standard,no_animation

Greg LeMond: Without "Doping" Armstrong Was At Best Only a "Top 30" Rider 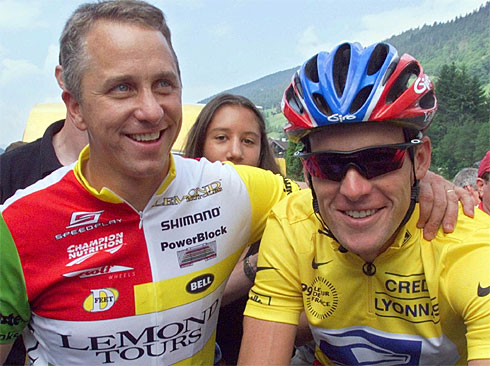 Cycling great, and former three-time Tour de France winner Greg LeMond, says Lance Armstrong would have only been "top 30 at best" and "not capable of" winning the Tour de France without the help of doping. He also says Armstrong should go to jail for his transgressions.

In an interview that aired Monday night on CNN’s Anderson Cooper 360°, LeMond called Armstrong a "thug" who used his cancer-survival story and cancer charity to manipulate the cancer community and shield himself from allegations.

CNN billed the interview as LeMond’s first in-depth interview since Armstrong admitted to doping in January after several years of strenuous denials. In April, LeMond spoke at a symposium on doping in Austin, Texas, and said he had "no vendetta" against Armstrong. He also said then that "I don’t rejoice" over the fact that Armstrong was stripped of his seven titles in the Tour de France, which left LeMond as the only American to have officially won the prestigious race.

In the interview with Cooper, LeMond was far more condemning of Armstrong, adding to a bitter history between the two dating to 2001, when LeMond questioned Armstrong’s involvement with Michele Ferrari, a doctor linked to doping scandals.

LeMond said one of the biggest tools in Armstrong’s scheme – besides doping – was his cancer-support foundation Livestrong.

"He manipulated the cancer community," LeMond said. "I mean, I have family members with cancer. Everybody has been affected — by cancer. But it was the manipulation and using that as — a way to, like, it was like Teflon. He used the money, he used the foundation to — not only cover for him but also destroy people."

"What do you think should happen to him now?" Cooper asked.

"This is not a sporting infraction," said LeMond, a three-time winner of the Tour de France.

"You think he should go to jail?" Cooper asked.

The federal government dropped a criminal fraud investigation into Armstrong last year without explanation. But it has sued Armstrong for civil fraud in a pending case that says Armstrong defrauded the U.S. Postal Service out of $40 million in sponsorship money. The suit claims Armstrong’s doping violated his contract with the USPS cycling team and that the USPS wouldn’t have paid the money if it knew Armstrong was using blood transfusions and performance-enhancing drugs to boost his performances on the bike.

It’s one of five federal or state lawsuits that have accused Armstrong of fraud since his televised confession to talk-show host Oprah Winfrey.

But Armstrong and his team of attorneys are officially 1-0 in fighting his post-Oprah civil suits after a group of consumer plaintiffs filed notice on Friday that they would give up their case against the cyclist and his book publishers.

The plaintiffs in that case had sued Armstrong and his publishers for more than $5 million, claiming they wouldn’t have bought his autobiographies if they knew the books were based on lies. Their decision to quit the case comes a month after a federal judge gutted their case in September, ruling that Armstrong had a right to lie in his books, which include the bestsellers It’s Not About the Bike and Every Second Counts.

The ruling left the plaintiffs with few choices: They could amend their complaint and keep fighting or quit. They chose the latter, giving Armstrong his first lawsuit victory since his doping confession, with four other lawsuits pending in state and federal court, including two from insurance companies that paid Armstrong’s bonuses for winning the Tour de France.

The judge denied requests by Armstrong and the book publishers for the plaintiffs to pay for their attorneys’ fees.

In another case filed against him last year prior to his confession, Armstrong reached an undisclosed settlement with the Sunday Times of London, which accused him of fraud. Armstrong had sued the Times several years ago when it published allegations about his doping – a case that the newspaper opted to end by paying him about 300,000 pounds in 2006.

Armstrong was stripped of all seven of his titles in the Tour de France last year after the U.S. Anti-Doping Agency released a huge dossier of evidence against him that portrayed him as ringleader of a vast cheating and cover-up scheme. All of his major sponsors dropped him shortly thereafter.