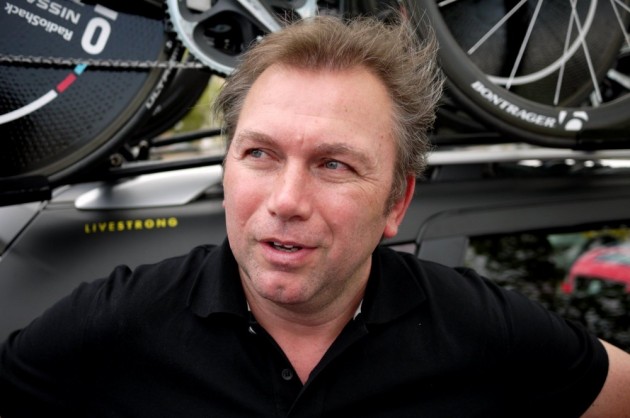 Lance Armstrong confidant and former US Postal Service team director, Johan Bruyneel, was handed a 10 year ban from the sport by the American Arbitration Association today.

A dark pallor has hovered over the Belgian since the United States Anti-Doping Agency (USADA) investigated him for his ties to the disgraced cyclist and what was later revealed as ‘the most sophisticated, professional and successful doping program that sport has ever seen".

A three-person panel found that “the evidence establishes conclusively that Mr. Bruyneel was at the apex of a conspiracy to commit widespread doping on the USPS and Discovery Channel teams spanning many years and many riders. Similarly, Dr. Martí were part of, or at least allowed themselves to be used as instruments of, that conspiracy.”

The arbitrators imposed a 10-year ban for Bruyneel and eight-year bans for Celaya and Martí. The panel found that Bruyneel trafficked performance-enhancing drugs and “was engaged in the allocation of team-related resources … causing a variety of prohibited doping substances and methods to be used expressly for the purpose of gaining an unfair advantage for the teams and cyclists he managed in cycling events.” Bruyneel also “profited considerably from the successes of the teams and riders he managed during the relevant period,”according to a statement from USADA.

Bruyneel responded to today’s decision on his personal website, by bringing into question  USADA’s initial jurisdiction over the investigation, while also acknowledging that the were "elements" of his career he wished were different.

“I do not dispute that there are certain elements of my career that I wish had been different. Nor do I dispute that doping was a fact of life in the peloton for a considerable period of time. However, a very small minority of us has been used as scapegoats for an entire generation,” he wrote. “There is clearly something wrong with a system that allows only six individuals to be punished as retribution for the sins of an era.”

According to the report, Bruyneel encouraged athletes to enhance their performance through the use of EPO, blood transfusions, testosterone, and cortisone. Bruyneel, Armstrong’s longtime director on multiple teams (U.S. Postal, Discovery Channel, Astana, and RadioShack), attacked the USADA as self-serving.

“Did the US Postal team really operate ‘the most sophisticated, professional and successful doping program that sport has ever seen?’ This headline-grabber has helped create a staggering industry of books and movies, but reveals only USADA’s talent for self-aggrandizement,” he wrote. “The reality is very different. In due course, I will take the time to give a full account of events within my knowledge. In the meantime I would ask you to treat USADA’s partial and self-serving narrative of events with considerable circumspection.”

However, Bruyneel continues to assert that USADA has no authority over him.

“I am a Belgian national and I reside in the United Kingdom. I have never been a member of USA Cycling, nor any other national governing body of sport based in the United States. I have never signed any document or agreement granting USADA or the AAA any authority over my livelihood or me,” he wrote. “None of the anti-doping rule violations alleged by USADA are said to have occurred on US soil. It simply cannot be correct or acceptable that USADA — a US organization — is freely able to determine the livelihood of any individual that it chooses to prosecute, without boundary and without oversight.”

In addition, the arbitration panel also noted that, in accordance with the Code and the International Cycling Union Anti-Doping Rules, USADA had authority to bring these cases because USADA was instrumental in discovering he violations.

Last December, Bruyneel, Celaya, and Martí’s case were heard by a panel of arbitrators in London during a four-day hearing. Together, the three men were represented by seven lawyers, and testimony was given on the part of no fewer than 17 witnesses. However, both   Bruyneel and Martí refused to testify, while Dr. Celaya agreed to give testimony. Although, the panel ultimately found Celaya’s testimony to be non-credible.

In a statement following today’s hearing, Bruyneel indicated his is weighing his options as to whether or not he will challenge the decision.

“I am currently debating what my next step should be. I could still challenge the decision of the AAA in the Court of Arbitration for Sport, although that would again require me to put my faith in arbitration,” he wrote. “I will shortly decide whether to keep up the fight or carry on and try to expose the hypocrisy of what USADA has put me and others through.”