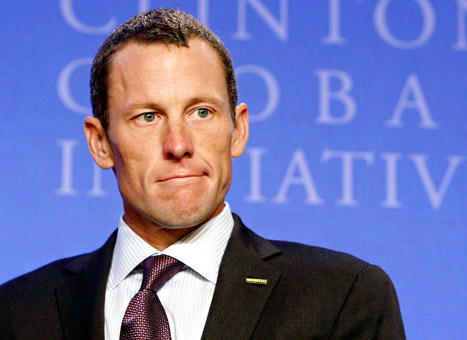 According to recent court documents that were obtained by USA TODAY,  Lance Armstrong "named names" and provided additional new details about his doping practices when he was compelled to respond to questions under oath in a recent lawsuit – his first publicly revealed answers under oath since his famous confession to Oprah Winfrey in January 2013.

The answers came last November but weren’t made public until yesterday, when they were obtained by USA TODAY Sports after being were filed in federal court by an attorney for former cycling teammate Floyd Landis as part of another lawsuit.

When asked who delivered the drugs he used to cheat in races, Armstrong replied with more names: masseuse Emma O’Reilly, bike mechanic Julien de Vriese and Philippe Maire, who has previously been described as “Motoman,” a motorbike courier.

Almost all of the names Armstrong mentions have at various times denied involvement in or knowledge of doping, including team manager Johan Bruyneel.

“Johan Bruyneel participated in or assisted with Armstrong’s use of PEDs, and knew of that use through their conversations and acts,” Armstrong stated.

Armstrong also replied that he generally paid for the substances he used.

“There may have been additional persons, but Armstrong does not recall any others at this time,” he answered.

In another response, Armstrong stated, “Armstrong would typically supervise his own use of PEDs, but on certain occasions, the use of PEDs was supervised by Dr. Celaya, Dr. del Moral, or Dr. Ferrari.”

Armstrong said he recalled using the blood booster EPO at the Tour de France as early as 1995. In his answers, he again denied cheating during his comeback years in 2009 and 2010.

After several years of denials, Armstrong admitted in 2013 during a  televised interview with Winfrey that he had doped during all of his Tour de France victories from 1999 to 2005. He did not name names in that interview or get into detail about how he obtained the drugs or who else knew about it.

But he was compelled to give these written answers last fall in a lawsuit filed against him by Acceptance Insurance, which sought to recover $3 million from him for bonuses paid to him for winning the Tour de France from 1999 to 2001. One day before he was scheduled to give a deposition in that case in November, Armstrong reached an undisclosed settlement to end it and cancel the deposition.

The answers were not available in the public court record until yesterday, when attorneys for former cycling teammate Floyd Landis filed them as an exhibit in Landis’ separate federal whistleblower lawsuit against Armstrong. Landis’ attorney filed the answers in support of his motion to compel discovery materials from Thomas Weisel, the financier of Armstrong’s U.S. Postal Service cycling team.

As previously reported by USA TODAY Sports, Armstrong replied in his written answers from November that he believed that “Mr. Weisel was aware of doping on the USPS team.”

Weisel has denied the allegation.

Armstrong also refers to his cycling team’s general manager, Mark Gorski, and former cyclist Chris Carmichael in his answers in the Acceptance case.

“As for Mr. Gorski, it is Armstrong’s belief that he was aware of doping by the USPS team,” Armstrong states. “Mr. Armstrong told Chris Carmichael in 1995 of his use of PEDs.”

Armstrong also was asked to name every person or entity he has paid to keep his doping secret.

“Armstrong has not paid or offered to pay someone to keep his or others’ doping a secret,” he stated. “However, Armstrong has, on occasion, provided benefits or made contributions to many people and institutions, some of whom may have been aware of, or suspected Armstrong’s use of performance-enhancing drugs and banned methods. Armstrong never provided any such benefits or contributions with the intent for it to be a payoff to keep doping a secret.”