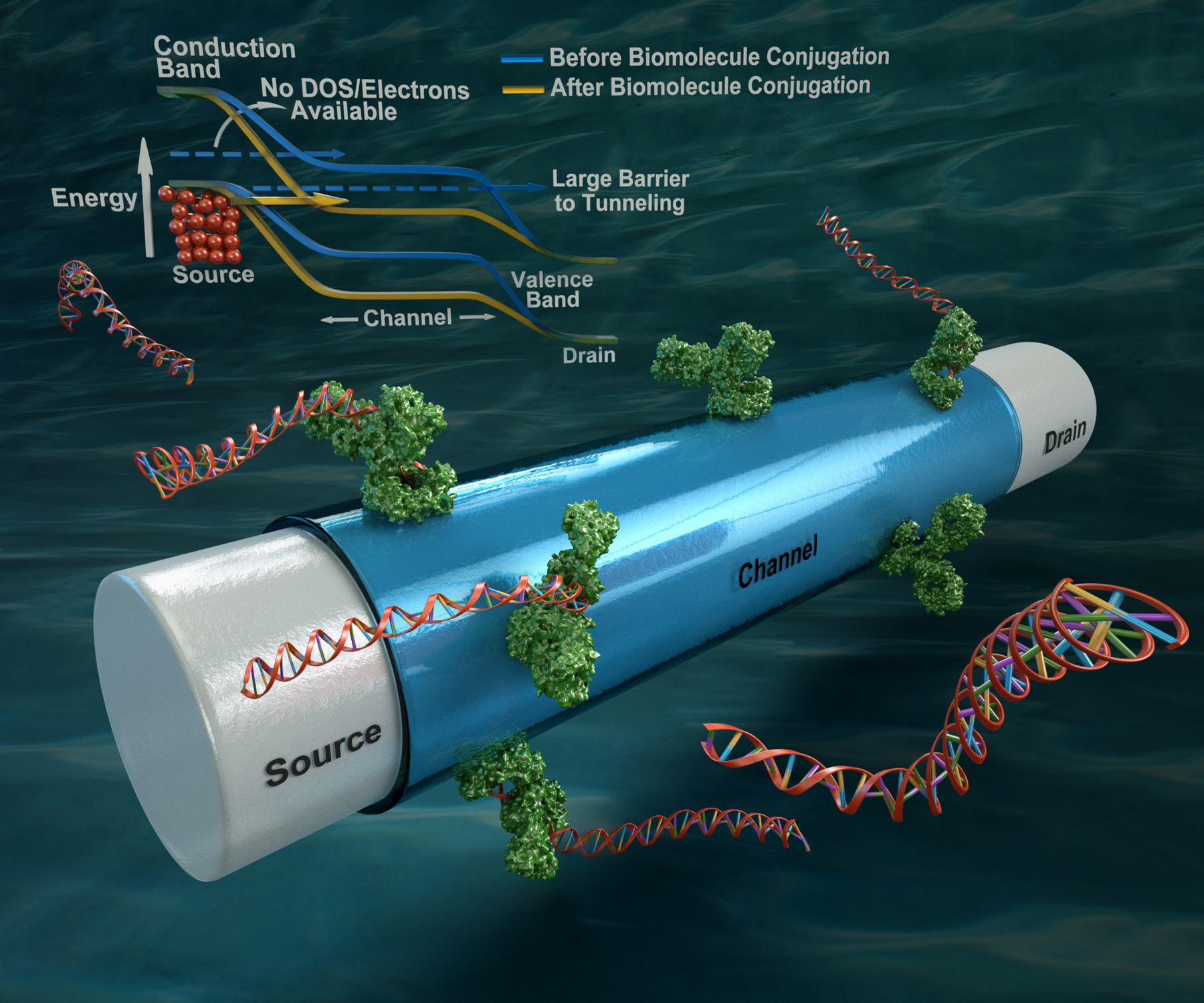 Biosensory devices linked to smartphone apps have already become part of elite sports. Athletes & their performance coaches are using wearable technology to capture and communicate data – electrocardiography or pulse oximetry (a non-invasive way to monitor O2 saturation) – helping them to optimize their performance. But advances in nano engineering are about to bring a new,  wave of innovative, wearable analytic “biosensor” devices which is beyond “crude physical metrics like heart rate” according to Joshua Windmiller, co-founder and CEO of Electrozyme . Chemical biosensors offer an almost limitless range of uses in elite competition & athlete training including tracking dehydration, recovery, nutrition, even wound healing; and joins our list of the top 10 innovations coming to cycling.

These possibilities in elite performance have opened up because of the production of nanostructured thin films which utilize “electrodes-modified nanostructured materials” to increase the detection of specific molecules – enzymes, nucleotides, antigens, DNA, aminoacids etc. These biosensing devices thus allow for real time monitoring in a host of performance indicators. For the sake of our ’2016 Rio Olympics’ or ‘immediate technical use’ specification on this innovation post series, I want to focus on wearable biosensors as invasive systems are more complex & bring other challenges.

As Pankaj Vadgama, professor of biomedical engineering at Queen Mary University of London, UK, commented “I think it will be at least 10 years before we see in-body and on-body biosensors as commonplace devices.” and made particular reference to the interaction of biomaterial with human tissue -”the big challenge as providing reliable monitoring in the face of tissue hostility and to offer safe, sterile components that can be stored and used on demand.” However no doubt there is intriguing work on biofuel cells for self-powered biosensors plus data acquisition on supplementary metabolites such as cortisol, norepinephrine, other biomarkers.

Resembling a temporary tattoo, a new skin-worn metabolite biosensor is described in the journal of Analytical Chemistry as the first warn athletes when they are ready to ‘bonk’/’hit the wall’ & to undergo human tests. Joseph Wang (yes same guy who I mentioned earlier) & his team uses the sensor to monitor lactate, which at certain concentrations marks when our muscles are shifting towards anaerobic metabolism, causing fatigue and the infamous “bonk”. Further research is expected to correlate sweat lactate levels with fitness & performance, which would be considerable progress compared to the current blood drawing techniques.

In tandem with the tattoo, labs are also investigating the first non-invasive mouthguard biosensor, as reported last month in ‘The Analyst’. This new mouthguard enzymatic biosensor bases its analysis on immobilized lactate oxidase & low concentrations of a peroxide product using human salvia samples. As with the tatto this can tender useful real-time information regarding a wearer’s health, performance, stress level & enable fine-tuning of their exercise programs.

An optical sensing system in “Smart Fabrics” has been designed by the Centre Suisse d’Electronique et de Microtechnique (CSEM) to monitor in-stu wound healing. Developed for the primary use by medical professionals to oversee recovery from chronic wounds– injuries that fail to heal in a orderly set of stages and in a predictable time frame – the device analyzes variables such as the concentration of inflammatory proteins such as C-reactive protein or Matrix Metalloproteinase, or pH levels, to assess the impact of would dressings or treatment strategies. Inevitably this may not only help athletes in recovery but improve injury treatment such as the use of ice baths or perhaps the next generation of this therapy option – find out more in our last innovation post.

No doubt you have heard of the Google

In addition to ‘doctors’ tools’, it was announced last month that contact lenses are being developed for night-time, infra-red vision. Researchers at the University of Michigan have combined two layers of graphene – which normally only absorbs about 2.3 percent of the light that hits it – with an insulator to boost the infrared signal dramatically. And think this talk on infra-red contact lenses – which could enhance vision in low light conditions for ultra endurance sport – is the press getting excited, check out the groups paper in the scientific journal ‘Nature’ – Graphene photodetectors with ultra-broadband and high responsivity at room temperature.

In 2014 Bioanalysis paper Affinity-based biosensors (ABBs) in sport medicine and doping control analysis by Mazzei et al, the authors described how ABBs would have contributed to the detection of substances on the World Anti-Doping Agency Prohibited List. Although the article noted that their application in the ‘framework of ‘traditional’ anti-doping test seems quite unlikely, mainly because of the still insufficient selectivity especially in the case of ‘pseudo-endogenous’ compounds, and on the lack of complete information regarding potential matrix effects in real samples’, the discussion of ABBs to obtain compelling doping evidence will certainly rubble on for a few years. Of course we are not just looking at biological fluids that are different from urine but and/or ‘in-vivo’ analysis. It was already written in the literature as far back as  2008 on the use of these tools in gene doping detection, with the sports authorities fearing a newer form of doping through the misuse of gene therapy. Remember the article of Team Sky’s altitude natives – not to say the rider is doping, but more the lack of scientific information in gene expression & the loop hole potentially open for doping experts.