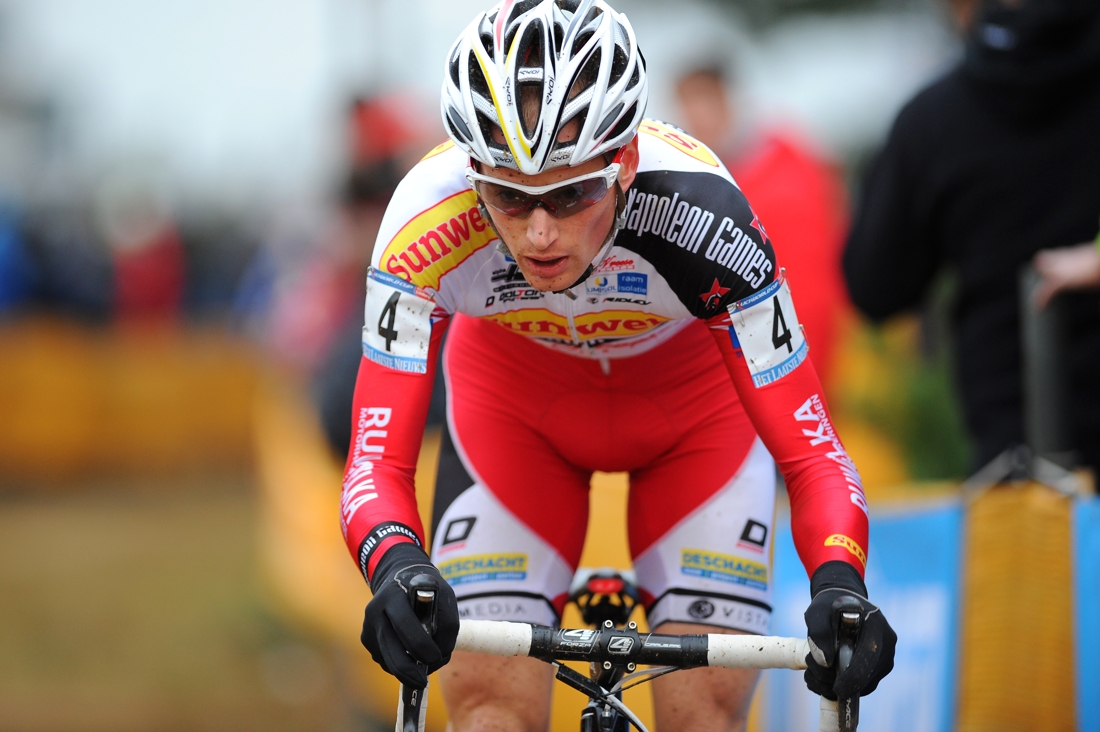 Both Kevin Pauwels (Sunweb-Napoleon Games) and Sanne Cant (Belgium) did more than enough to secure their overall victories in the UCI Cyclocross World Cup on Sunday afternoon. On a muddy course in Hoogerheide, Netherlands, they both finished fourth in their category during the sixth and final World Cup round.

One week ahead of the UCI Cyclo-cross World Championships in Tábor, the race was a last test for many riders. The victory in the Elite Men category was for an outstanding Mathieu van der Poel (BKCP-Powerplus). In the Women category Eva Lechner (Colnago-Sudtirol) rode in similar style to a solo victory. For both riders it was their first ever victory in the World Cup at the highest level.

The victory from Mathieu van der Poel in the Elite Men category was most impressive. Halfway the opening lap, the 20 year-old Dutchman rode away from the opposition. From there, van der Poel simply relegated everybody, only taking his foot from the gas in the final laps of the long race.

In the battle for second place Gianni Vermeersch (Sunweb-Napoleon Games) took the initiative, riding solo for five laps. Two laps before the end of the race, Wout Van Aert (Vastgoedservice-Golden Palace) and Kevin Pauwels caught up with Vermeersch. In the final lap Van Aert had most left in his tank, and the 20 year-old Belgian easily grabbed second place.

Vermeersch captured his first podium result, just ahead of World Cup winner Pauwels. The latter only had to finish his race to hold off Lars van der Haar (Team Giant-Alpecin). The latter finished fifth in Hoogerheide and is second in the World Cup.

Despite finishing on a very distant 27th place, Corné van Kessel (Telenet-Fidea) held on to his third place in the World Cup by one point over German rider Philipp Walsleben (BKCP-Powerplus). Belgian champion Klaas Vantornout (Sunweb-Napoleon Games) abandoned halfway into the race.

In the Women category, 24 year-old Sanne Cant clinched her first overall victory in the UCI World Cup despite a late crash with a fourth place in Hoogerheide. The European and Belgian Champion finished ahead of her closest rivals Ellen Van Loy (Belgium) and Katherine Compton (USA).

The latter struggled with breathing problems and finished a distant 21st in Hoogerheide.

UCI World Champion Marianne Vos (Rabo Liv Women Cycling Team) started well but faded back as she struggled with a hamstring injury. One week before defending her title Vos finished on an unexpected twelfth place.

In the Men Under 23 category there was a duel for the victory between World Cup leader Michael Vanthourenhout (Belgium) and Laurens Sweeck (Belgium). Halfway the race, Sweeck powered away and he went on to capture the victory, crossing the line in tears. With his second place in Hoogerheide, Vanthourenhout did just enough to get the overall victory in the World Cup, finishing five points ahead of Sweeck.

In the Junior Men category, there was no opposition for Eli Iserbyt (Belgium). Iserbyt won his third out of four World Cup rounds, this time finishing solo ahead of Roel van der Stegen (Netherlands) and Gage Hecht (USA).

Next week the UCI Cyclo-cross World Championships are held in Tábor, Czech Republic.