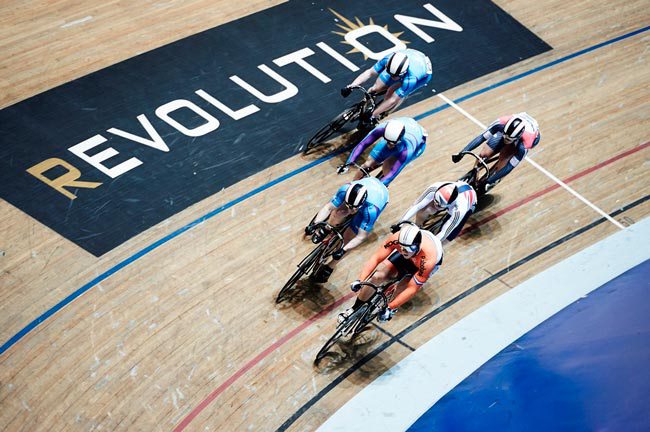 Double Olympic Champion Laura Trott is the latest star rider confirmed for the second round of the Revolution Series in Manchester this weekend (22nd November). She joins an all star line up including Pete Kennaugh, Luke Rowe, Ed Clancy, Jo Rowsell, Giorgia Bronzini and triple sprint World Champion, Francois Pervis.

Trott will be looking to fine tune her form ahead of the Track World Cup in London and comes off an incredible 17 race winning streak at Revolution. She was last defeated at a Revolution event in January 2014 but will face her toughest challenge yet from Wiggle-Honda team mate Giorgia Bronzini, who also comes off the back of victory after winning the Scratch Race at the Belgium Open International last weekend.

“The big goal will be the Worlds in France, in February, so I will do my big block of training before then,” Bronzini said. “Also, next week at Revolution will be hard, because the level will be high. I will have a lot of teammates there, so it will be good to show something of Wiggle Honda!”

In the men’s racing Pete Kennaugh returns for Team Sky in the Elite Championship alongside Luke Rowe with Ed Clancy lining up for Rapha Condor JLT after missing round 1 due to illness. They will be aiming to move up the leaderboard and challenge current Championship leaders, Maloja Pushbikers, who will be represented by Andreas Graf and Nico Hesslich.

Triple World Champion Francois Pervis headlines the sprint racing and will be joined by Quentin Lafargue to take on the leading British sprinters including Olympic Champion Phillip Hindes.

November at 6.40am and then on C4+1 at 7.40am. The full program will then be able to view online on 4OD – full details of the Channel 4 scheduling here.