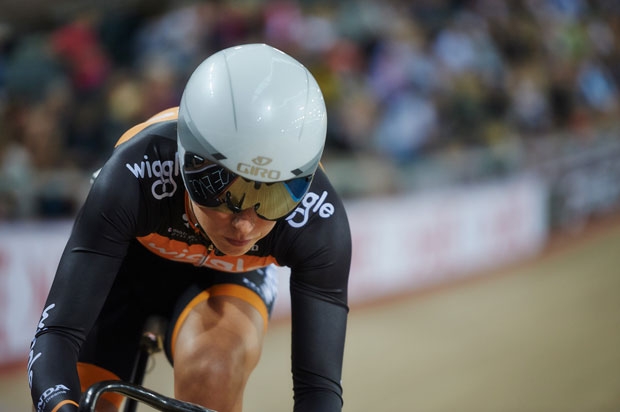 The final session of Revolution Series One started with the crowd on their feet as they watched Laura Trott compete in the Omnium Points race as she aimed to win 6 consecutive events. Included in the program was the men’s Elimination Championship, Scratch Race and the Sprint Finals. The Hoy Future Stars also competed in a mix of events, showcasing the up and coming talent which a few years ago fielded Revolution regulars Ian Stannard and Ben Swift.

Under the new UCI rules the Omnium comes down to the final Points Race. Laura Trott started over twenty points ahead of Vos and immediately added to her points haul with two 3rd places in the first couple of sprints, she then went on to win four of the remaining eight sprints. Vos was determined to win one, she lead out two sprints from the bell but Trott proved too powerful coming past her in the home straight every time. Trott took her hands off the bars to wave a kiss to the crowd on the final straight, showing her appreciation for the cheering of the 5,000 spectators who loved every minute of it.

Juan Peralta and Lewis Oliva booked their places in the Sprint Finals with easy victories for both of them over Chris Pritchard and Matt Rotherham, promising a viciously fast final.

The Men’s Elimination Championship featured big road racing names, with Alex Dowsett staying in the longest as Ian Stannard, Ben Swift and Adam Blythe exiting the race due to poor placing. Alex Dowsett then found himself at the back as three riders were left. Andy Tennant gradually increased the pace all the way to finish in a huge effort that saw him win the first race of the series.

The Hoy Future Stars were as exciting to watch as their Elite counterparts. They raced in three different disciplines; a Points Race, a Scratch Race and a six lap dash. Rebecca Raybould and Fred Wright were the 6 lap dash victors, each with massive solo efforts with two laps to go. Jamie Ridehalgh and Jess Roberts won the Points Races, and Eleanor Dickinson and Rhys Britton won the Scratch.

Madison one kilometer time trial gave the riders the unusual opportunity of show-casing their sprinting and hand-slinging skills in one event. The German duo Christian Grasmann and Marcel Kalz set off last and finished first with a winning margin of 0.4 seconds over Orica Greenedge’s team. On their victory lap they threw their podium flowers in to the crowd to two very lucky spectators.

Laura Trott added to her Omnium victory in the Australian Pursuit. It went to a photo finish as Vos pushed her to the limit on the opposite side of the track. Elinor Barker was also left in the race after she managed to avoid being caught by her team mate Trott.

Both the 1-2 and the 3-4 sprint finals went to the deciding round, Matt Rotherham just managed to best Christ Pritchard. Lewis Oliva left it until the last twenty millimetres in his final against Juan Peralta, the Welshman just managed to edge the Spaniard in to second place.

Sky won their first race of the weekend as Ben Swift lapped the field in the Men’s Scratch Race. He came past Alex Dowsett on the back straight after both of them had successfully spent most of the race trying to gain a lap.

To finish the evening, Laura Trott gave spectators a final reminder of her speed and strength in the women’s Devil/Scratch Race making it eight wins out of eight over the weekend.