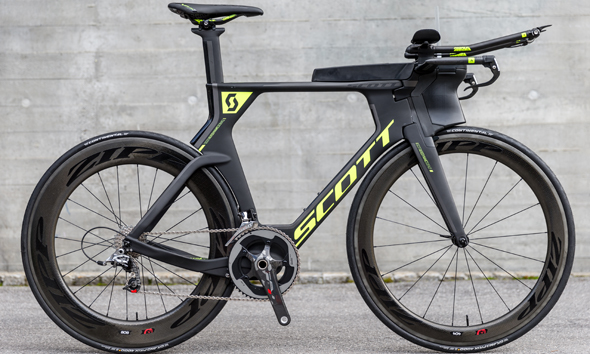 According to Scott, the new Plasma frameset was developed in conjunction with British aerodynamics guru, Simon Smart, who’s best known in the bike realm for collaboration with the American wheel brand – ENVE.

Scott says the new Plasma frameset was designed from the ground up – with a "rider onboard" approach to aerodynamics. With that in mind, the Plasma was developed over an 18 month period using a propriety CFD (computational fluid dynamics) code. According to Scott, this yielded a design that was faster with a rider onboard –  with a 7 percent lower drag co-efficient over it’s predecessor.

The new Plasma 5 incorporates Scott’s top-level HMX carbon, while the 4 utilizes it’s HMF material and foregoes the integrated fork/heatube set-up of the 5. Despite these differences, Scott says the Plasma 4 only concedes about 3 percent in aerodynamic drag to it’s bigger brother.

In any case, both framesets feature an extended rear foil, as well as a reworked down tube that borrows heavily from the brand’s Foil "aero" road bike. In addition, the distinctive zig-zag seat junction is carried over from the previous Plasma. However, it now flares even further back over the rear wheel, with the seatstays now attached horizontally rather than diagonally – for improved aerodynamics.

As for the triathlete, the new Plasma boasts a range of integrated hydration and storage features, that should accommodate even the most demanding of events.

Scott hasn’t given any exact word on the cost of new Plasmas, only to say that pricing should range from $3800.00 to $13500.00, with availability starting in December.

Even before the Plasma 5 had been presented to the public it had already broken records. On his way to victory at the IM European Championships in Frankfurt, Sebastian Kienle broke the existing bike split record by almost 10 minutes. He rode a Plasma 5 featuring a unique camouflage design which made it impossible to spot the actual frame shapes. Despite an incredible effort on the bike, the German saved enough energy during the bike leg to complete the closing marathon in a time of 2:49:14 to win the European Championships staying below the magic mark of 8 hours and smashing the existing course record."I did my final preparation for the race in Frankfurt on the new Plasma 5 and knew that it was fast but I did not expect it to be that fast – I’m stoked," Kienle said after the race.

The Plasma 5 has been designed to be faster with the rider than without. A moving rider creates a substantial influence on the airflow around the bike and ultimately on the aerodynamic performance of the bike-rider system. "The influence of the moving rider on airflow and hence frame aerodynamics is a complex phenomenon but definitely needs to be considered when pursuing the goal of developing a high-performance Triathlon and TT-bike;" explains Simon Smart, Technical Director of Smart Aero Technology and co-developer of the Plasma 5. Extensive research resulted in the development of an airfoil concept with a set of variable parameters that can be customized for every airflow characteristic in each aero zone of the frameset and even on the handle bar. In addition, the Plasma 5 features state-of-the-art integration of components from the front all the way to the rear end. With the Plasma 5, SCOTT was able to reduce aerodynamic drag by 7% compared to its predecessor, the Plasma 3.

The position of the rider directly influences the force distribution during the pedal stroke and consequently determines pedaling efficiency while the position of the rider’s upper body directly affects aerodynamic drag. Saddle and handlebar adjustability were in effect a major topic during the developmental phase. Considering the idea that this bike would be ridden by riders of all shapes and sizes, from World Tour riders to long-distance triathletes, the Plasma 5 offers a wide range of adjustability to follow suit. For the cockpit design, SCOTT partnered with the experienced developers of PROFILE DESIGN. 2 stem and 3 base bar options (flat, drop and rise), adjustable spacers and compatibility with almost any extension ensure a perfect fit and flawless integration for maximum performance.

Long distance triathletes spend several hours on their bike before switching to the running segment. While aerodynamics and ergonomics are key factors for a fast and efficient bike split, nutrition and hydration are essential to maintaining a high pace during both the bike and running legs. "We assessed the current fuel systems on the market and soon realized that we would need to come up with a novel solution to fully meet the needs of long distance triathletes," explains Frank Oberle, Triathlon Product Manager at SCOTT Sports. In collaboration with the renowned parts and triathlon accessories specialist PROFILE DESIGN, SCOTT developed a sophisticated storage system consisting of an integrated Aero Drink and a Storage Box that stand above the rest due to their high degree of usability, while improving the aerodynamics of the bike and the ergonomics of the rider.

The new Plasma frames inherit SCOTT’s expertise in carbon engineering and manufacturing. While designing an aerodynamic frame has been a priority, the aerodynamic and structural engineers worked closely together to ensure that solutions were derived which would be superior in both mechanical and aerodynamic performance. As a result, the Plasma 5 frameset-stem construction weighs 130g less than the Plasma 3 while at the same time the headtube torsional stiffness has been improved by an incredible 47%. "It is not easy for a rider to feel an 8 to 10 Watt improvement in aerodynamics but what he will be able to feel is a stiffness increase of over 40%," says Benoit Grelier, Head of Engineering at SCOTT Sports.

The top-of-the line Plasma 5 HMX Carbon fiber frame is complimented by the Plasma 4 HMF Carbon fiber platform which has been developed simultaneously and inherits multiple features of the Plasma 5. A standard fork-headtube construction and a modified frame result in a technologically advanced Triathlon and TT bike at a very attractive price point. For the Plasma 4 we reduced the complexity of manufacturing but still achieved a high-performance frame. Wind tunnel testing revealed that the Plasma 4 creates only 3% more aerodynamic drag compared to the Plasma 5 while featuring identical stiffness values," explains Benoit Grelier.

SCOTT will offer the new Plasma in two platforms for 2015, resulting in a total of 4 models with MSRP’s ranging from EUR 2’799 to EUR 9’999. In addition, there will be a frameset offering for both platforms. Both models will be available in 4 different frame sizes and are expected to be in shops by December 2014.

The Plasma 5 was designed to enable an aerodynamic fusion between rider and bike.

Be it an aerodynamic frame design that takes into consideration the interaction between a moving rider and the bike, an ergonomically and purpose driven handlebar that offers a wide range of adjustability or the practical implementation of food storage, the Plasma 5 takes extra steps to make bike and rider one.

The Plasma 5 has been designed to be faster with the rider than without.

A moving rider creates a substantial influence on the airflow around the bike and ultimately on the aerodynamic performance.

Despite the extra effort required to examine this complex phenomenon, it was closely considered during the development process of the Plasma 5 and had a major influence on the frame design.

To a large degree, the position of the rider on the bike determines riding performance.

Saddle and handlebar adjustability were in effect a major topic during the developmental phase.

Considering the idea that this bike would be ridden by riders of all shapes and sizes, from World Tour riders to long-distance triathletes, the Plasma 5 offers a wide range of adjustability to follow suit.

Long distance triathletes spend several hours on their bike before switching to the running segment.

While aerodynamics and ergonomics are key factors for a fast and efficient bike split, nutrition and hydration are essential to maintain a high pace during both the bike and running legs.

With this in mind, the engineering team developed a sophisticated storage system that stands above the rest due to its high degree of usability, while not hampering the aerodynamics of the bike nor the ergonomics of the rider.

The Plasma 5 has been developed to match the needs of triathletes and cyclists alike.

While a wide range of adjustability and a modular stem/bar concept ensures that the position requirements of both triathletes and cyclists are sufficiently covered with the same bike, triathletes benefit from a sophisticated storage system.

With the exception of the triathlon-specific storage box and an Aero Drink bottle, the Plasma 5 is fully UCI-compliant and can be used in competitions for both sports without restrictions.