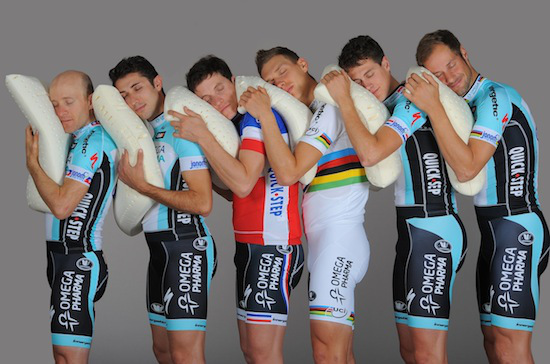 As we head into a new WorldTour season, Sir Dave Brailsford unveiled the 5 year plan for Team Sky, which after a difficult 2014 season will be trying to replicate the success of two Tour de France yellow jerseys and finally get a victory at the Classics and Monuments*. I was interested to read where the team’s research department was looking for inspiration – as mentioned in the Telegraph article – within the military and NASA, and it seems to particular areas would be regarding sleeping patterns (pretty positive this is more than just making sure the cyclists get 8 hours sleep) and the use of cranial stimulation via magnets to ‘numb the pain’. Indeed this may be a rare glimpse into the near-future of cycling science as Brailsford has made it clear that the team has “done pretty well for other cycling teams over the last five years helping them out,” (declining to go into further detail when interviewed).

* Sky had 165 victories in its first five years, including the two Tour triumphs, yet comparing this to the success of cycling’s other superpower, Etixx-Quick-Step, you get an idea of why the British team wants to have more success throughout the spring classics: Patrick Lefevere’s heavyweights won 56 times last season alone, including an impressive haul of one-day races, Kuurne-Brussels-Kuurne, Strade Bianche, Dwars Door Vlaanderen, and Paris-Roubaix among them.

So here is a quick look at the ‘science’ behind sleep patterns and cycling recovery/performance, with a focus on hormone levels, impact of sleep on metabolic function and athletic performance.

It is important to note though restricted sleep has also been shown to impair cognitive performance and mood (‘Patterns of performance degradation and restoration during sleep restriction and subsequent recovery: a sleep dose-response study‘; Belenky et al., 2003), appetite regulation (Spiegel et al., 2004) and immune function (Krueger et al., 2011) – sleep deprivation is associated with increased daytime levels of inflammatory mediators such as IL-1, IL-6 and TNF (Mullington et al 2010). For several years, sleep has (academically) been recognized as an essential component of preparation for, and recovery from high-intensity training (Reilly & Edwards, 2007; Robson-Ansley et al., 2009; Samuels, 2008) and it is interesting that you don’t see more discussion on sleep quality throughout competition, where as there is such an emphasis on nutrition – perhaps athletes felt powerless to make considerable improvement in their unconscious state?

Why is investing in sleep so important?

Sleep is essential for athletes, both for preparing for, and recovering from, training and competition.Dr Shona Halson produced a great summary paper, which was posted on the Gatorade Sports Science Institute website, highlighting these key points:

The recent sleep history of an athlete has such a marked impact on their daytime function, that organisations are recruiting ‘sleep coaches’, like Nick Littlehales, and investigating in support much in the same way as sports science has been designed to improve nutrition, hydration, psychological well-being and physical conditioning.  As Littlehales explained “Many clubs make massive investments of millions of pounds in their players but don’t consider their sleep. Often footballers are young men who leave home before they know how to manage their routines or the physical and mental demands of their sport – from fatigue and pressure to hotels, travel and flights. These things all add up. Sleep can affect performance, energy, mental focus and concentration. And quality sleep can bring more consistent performances, faster recovery times, higher motivation levels and better decision-making. But the first time many athletes think about it is when their head hits the pillow.”

It is well documented that exhaustive exercise can lead to activation of several “stress hormones” such as stimulating the hypothalamic pituitary-adrenal (HPA) axis, concentrations of adrencorticotrophin (ACTH) and basal cortisol which create adverse conditions such as heightened body temperature, psychological stress and could conceivably impact anaerobic metabolism during mountain passes, time trials, sprints, “breakaways” etc .

The release of hormones by the pituitary – the “master” endocrine organ that controls the secretion of other hormones from the peripheral endocrine glands – is influenced by sleep. Modulation (regulation) of pituitary-dependent hormonal release is partly mediated by the modulation of the activity of hypothalamic (hormones produced in the hypothalamus and carried by a vein to the anterior pituitary gland) -releasing and/or hypothalamic-inhibiting factors . Think of a feedback cycle, kind of like rush hour on the M25. During sleep, hypothalamic factors are activated – Shapiro et al (1981) demonstrated that growth hormones are released, suggesting the optimum conditions for anabolism prevail during sleep – or inhibited, such as for corticotropin-releasing hormone (neurotransmitter involved in the stress response and stimulates the pituitary synthesis of ACTH – a hormone mentioned in the last paragraph.

Thus sleep, in particular slow-wave sleep (SWS, or deep sleep), is important for recovery in athlete because of its impact on hormones. .

Studies which have confirmed this include;

– A 2005 investigation into subjects that have undergone 6 days of sleep restriction, showed an elevation of pituitary-dependent hormones (i.e stress hormone cortisol) and a 6-fold slower rate of decrease in the early evening when compared to fully rested controls .

– Shapiro et al (1981) investigated sleep prior to and following a 92km marathon in six subjects. There was a quantitative increase in total sleep time and particularly in SWS, in addition to a qualitative shift towards more stage 4 sleep immediately after the events metabolic stress. These results support the theory that sleep (particularly SWS) is a major factor in the recovery of athletes.

Impact of sleep on metabolic function

Sleep debt has been shown to have a harmful impact on metabolism by a number of studies.

There are conflicting studies on the impact of acute sleep deprivation on energy expenditure – Benedict C et al 2011 describing how only one night of sleep deprivation acutely reduces energy expenditure in healthy men, whilst Jung et al 2010 indicated that ‘wakefulness under bed-rest conditions is energetically cost’. However what seems to be clear is the role of sleep on metabolic signals.  Spiegel et al 1999 found that glucose tolerance and thyrotropin* concentration were significantly lower in the sleep-debt condition (p<0.02 and p<0.01 respectively), and before an intermittent-sprint performance, Skein et al 2011 found that muscle glycogen concentrations were lower following 30 h of sleep deprivation (granted elite cycling probably wouldn’t have such extreme deprivation). Sleep restriction is associated with an impairment of carbohydrate tolerance, to the point where similar clinical observations are made in patients with clinically significant impaired glucose tolerance. Chronic sleep deprivation may even increase the risk for diabetes (Copinschi G 2005).

*Also known as Thyroid-stimulating hormone which causes the thyroid gland to produce thyroxine, then triiodothyronine which stimulates metabolism of almost every tissue in the body

From looking at the literature there appears to be several scientific phenomena existing within this space. Skein et al (2011) showed that sleep deprivation must be greater than 30 hours to have an impact on anaerobic performance, yet at the same time aerobic performance seems to decrease after only 24 hours (Oliver et al, 2009). For example, Souissi et al (2003) demonstrated that using an cycle ergometer, peak power was unaffected after 24 hours of wakefulness but impaired after 36 hours. Similarly this was found in isokinetic (movements at constant speed) byBulbulian et al (1996) and authors suggested that performance in repeated sprints was hindered by reduced muscle glycogen and/or increased perceptual strain which could reduce muscle recruitment (Skein et al 2011).

However for elite cycling we are probably not talking about ‘complete’ sleep deprivation but rather partial (broken sleep, etc). A small number of studies have examined the effect of partial sleep deprivation on athletic performance; including Reilly and Deykin (1983) demonstrating that gross motor functions such as muscle strength, lung power and endurance running were unaffected, but that there was a reduction in a range of psychomotor functions. These results are reflected in a Blumert et al (2007) investigation into nine US college-level weightlifters which showed no performance differences in tasks (snatch, clean and jerk, front squat) but a significantly altered mood state – confusion, fatigue, vigor.

So perhaps maximal power numbers wouldn’t be affected by sleep (aside from rest and muscle repair) but there is evidence to suggest “sustained or repeated bouts of exercise are affected to a greater degree than one-off maximal efforts” (Blumert et al, 2007; Reilly & Edwards, 2007). I would speculate this an effect of reduced cognitive responses to exercise – concentration, effort, focus – and as such be a significant factor in long stage races.

So what has been found when athletes have more than their 8 hours sleep or indeed a power nap? Mah et al. (2011) instructed six basketball players to obtain as much extra sleep as possible following two weeks of normal sleep habits. Faster sprint times and increased free-throw accuracy were observed at the end of the sleep extension period. Mood was also significantly improved, with increased vigour and decreased fatigue (Mah et al., 2011). In regards to the benefits of 40 winks, Waterhouse et al. (2007) investigated the effects of a lunchtime nap on sprint performance following partial sleep deprivation (4 h of sleep). Following a 30-minute nap, 20 m sprint performance was increased (compared to no nap), alertness was increased and sleepiness was decreased. Subsequently the research group supported the idea that napping may be beneficial for athletes who have to routinely wake early for training or competition and for athletes who are experiencing sleep deprivation (Waterhouse et al., 2007).