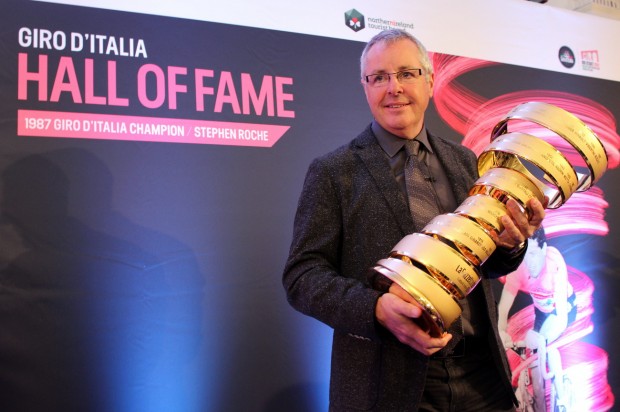 Stephen Roche was officially  inducted into the Giro d’Italia Hall of Fame yesterday, at a small ceremony in North Ireland.

The 1987 race champion is the third rider to be honored after Eddy Merckx (2012) and Felice Gimondi (2013), and the first to accept the accolade outside of Italy.

The Irishman was presented with a trophy at the Causeway Hotel, near the World Heritage Giant’s Causeway coastline, in front of an audience of about 83 people including RCS Sport representatives.

Northern Ireland will host the Grande Partenza and an additional two stages of the Giro this year with the last finishing outside in Dublin. It will be the 11th time the Grand Tour has started beyond Italy’s borders.

Roche fondly recollected highlights of his professional career that in 1987 included not only the Giro but overall at the Tour de France as well as gold at the Road World Championships.

“I’m very proud of course for a multitude of reasons,” Roche told journalists.

“Having it here on the Giant’s Causeway, the Giro is a giant event, giant achievement, a giant honour for me getting it here, you know. It’s not something I would of thought of if I’m being honest with you. I’m very proud.”

Roche’s former teammate, and head of the Italian National Cycling Team, Davide Cassani, was at the ceremony, and had this to say:

“I learned a lot from Stephen when he was my captain in the Carrera team. I believe that his entry into the Hall of Fame of the Giro d’Italia is a fully deserved recognition.”