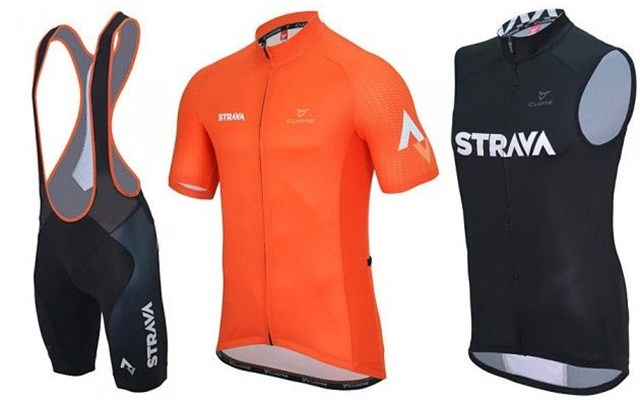 Strava has been helping cyclists "plot" their workouts with fierce   intensity, to the extent that the app has created a world-wide network of "competing, cycling comrades" – that dot the globe.

Strava now wants to capitalize on that spirit – by allowing its members to boast about their "metrics" in style – literally.

Strava announced the launch of a new range of cycling apparel – consisting of brand emblazoned kit, socks and more – directly through their online store.

Aye,  the Strava collection consists of a short sleeve jersey, bib shorts, vest, arm warmers and socks available for both men and women.

In addition, there are some off the bike items, such as a baseball cap and a couple of t-shirts.

Members now using Strava’s app, will not only know how the competition is performing, but perhaps be able to glean what their wearing as well.   😉

“The Strava store is really popular with cyclists in the UK and we hope you’ll like the new kit we’ve added to our range recently,” said Gareth Nettleton, Director of International Marketing for Strava. “We’re working hard to make our store more accessible and local to customers across the globe. Soon, you’ll be able to pay in your local currency and in 2015 we’ll be internationalizing the store further which will mean shipping to other parts of the world be faster and more straight forward. "