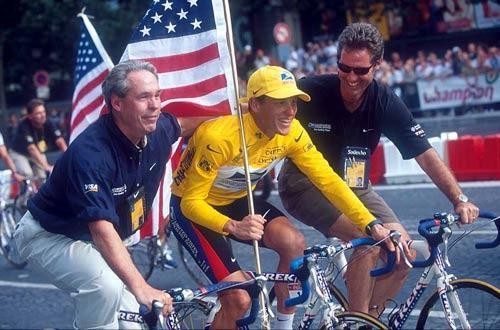 For year’s, a pallor of suspicion has hovered over Thomas Weisel’s reputation, with regard to his knowledge, that Lance Armstrong, along with most of US Postal Service team, engaged in the widespread and systematic use of performance enhancing drugs.

As of this month, the same suspicion has arisen again, wherein Weisel was named by Armstrong in court documents as someone who was very much aware that "doping" took place within the ranks of the team. To wit:

"’Mr. Weisel was aware of doping by the USPS Team (the US Postal Service team headed by Armstrong) and in professional cycling in general."

Other former team members are cited in the documents as saying they had the same impression, one of them so certain of Weisel’s knowledge that he would "tattoo it on his arm."

Similar allegations surfaced in earlier court documents and elsewhere from other USPS team members, including Floyd Landis, who filed the original suit, former Tour de France winner Greg LeMond and others once associated with the team. In the recently published book about the doping scandal, "Wheelmen," by two Wall Street Journal reporters, LeMond recalls a discussion with Weisel about doping in professional cycling and quotes Weisel as saying, "I think this is bull-. Riders should be able to take whatever they want."

Weisel has not responded to this column’s request for comment, but his attorney, Robert Sacks, a partner at Sullivan & Cromwell, strongly denied the latest allegations against his client.

"Mr. Weisel unequivocally denies being aware that Mr. Armstrong and other cyclists were doping. He has said that before and continues to say it now," Sacks said Tuesday.

"These are not factual allegations. If you read Armstrong’s statement, he sensed Mr. Weisel must have known about it, but no facts were offered. Not him, not Landis, not Tyler Hamilton (another team cyclist cited in the documents) have offered any actual facts. If the riders can’t offer the facts, then they don’t exist," said Sacks.

Weisel, 72, the founder of Montgomery Securities, which took Yahoo public in the 1990s, is now co-chairman of Stifel Financial in San Francisco. He told the New York Times earlier this year, just after Armstrong’s televised confession to Oprah Winfrey, "I did not know until very recently that Lance Armstrong had engaged in doping while riding for the team. Any allegation that I was aware of or condoned or supported doping by any team rider is false."

As for being aware of doping in general, he told the San Francisco Business Times last year, "People say, ‘Jesus, you had to know this was going on because everyone was doing it.’ That’s not true. I never thought it was."

Weisel got some relief in February when the Justice Department, which joined Landis’ suit, did not name him in its separate complaint. But his name is still on the original suit. Last month, the federal judge overseeing the suit hinted he would not throw out the case, as requested by the defendants, which besides Armstrong and Weisel include Weisel’s now defunct sports company, Tailwind Sports, some of its former executives and other financial firms once owned by Weisel.

"It might get dismissed as to some defendants. I can tell you I doubt it as to all," said U.S. District Judge Robert Wilkins, whose final decision could come this week.