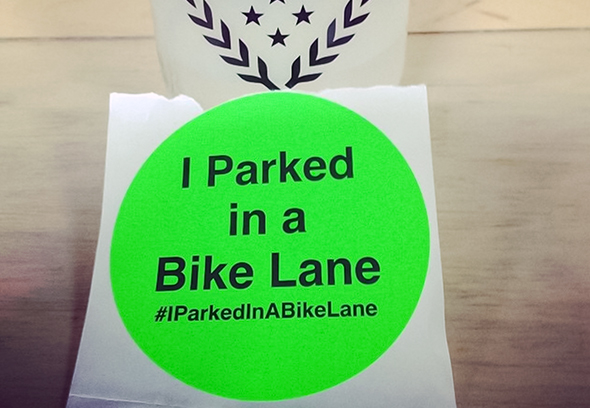 If you’re the type of driver who doesn’t think twice about parking in the bike lane, your car might get tagged in Toronto with an "I Parked in a Bike Lane" sticker, which a group of "guerrilla" urban cyclists are hoping will help stop motorists from engaging in this dangerous practice.

An Instagram account affiliated with the campaign has been in effect since late August, and while it doesn’t boast too many photos, "spottings" have been frequent enough on social media with the tag #IParkedInaBikeLane.

The advocates spearheading the campaign will send interested parties their own roll of stickers so they can tag perpetrators as they see them and then post the evidence to social media.

The green stickers, which cost C$5 a roll, have the words “I parked in a bike lane” on them, together with the hashtag, #IParkedInABikeLane.
#IParkedInABikeLane was started out of frustration for the blatant disregard for cyclists and cycling infrastructure in Toronto. The concept is simple – you see a vehicle parked in a bike lane, you slap a sticker on it. The intention isn’t to cause damage or vandalize (the stickers don’t damage anything anyway) – it’s to get drivers to think twice about what they are doing and perhaps change their actions in the future. Parking and driving in bike lanes is not only inconsiderate and selfish, but also incredibly dangerous, especially for cyclists who are not comfortable integrating with the flow of traffic.
http://instagram.com/iparkedinabikelane