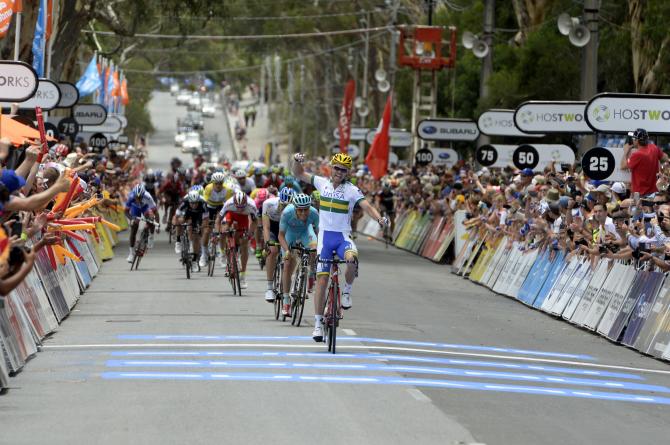 It was a welcome result for the 85 thousand cycling fans who turned out to support Hostworks Stage 1 that rode out from the charming Barossa Valley town of Tanunda for two circuits through the nearby wine growing region before heading across undulating terrain blackened by the recent South Australian bushfire, to the finish in Campbelltown.Homegrown hero Jack Bobridge has grabbed all the glory on the opening day winning the stage and claiming the overall lead in the Santos Tour Down Under, the first UCI World Tour event of the season.

The bonus time Bobridge collected for the stage win and during the day has put him in the Santos Ochre Leader’s Jersey, four seconds clear of Westra with Durbridge sitting third overall at six seconds.

It’s the first time in Ochre for Bobridge. The track world record holder and Olympic silver medallist recently moved back to Australia to race domestically and to focus on earning selection in the track squad for the Rio Olympic Games. He is also enjoying fatherhood after wife and fellow Olympian Josie Tomic gave birth to their daughter four months ago.

Bobridge grew up training on the same roads he raced on today and had promised before the start that he’d be one to watch. But it was a close run thing with the peloton thundering across the line, so close in fact that no time margin was awarded at the finish.

“I know these roads like the back of my hand, so I hope that can be an advantage,” said Bobridge in Tanunda before the race began. “We’ll be getting into some breaks, and try to win a stage. That would be huge for our team.”

True to his word he launched an audacious attack in the opening few kilometres of the 132 kilometre stage with Durbridge, Westra, and Russian Maxim Belkov (Katusha) joining him in front.

The quartet rode out to a lead of just over two minutes but it seemed the peloton had their measure and was comfortable with the gap, confident they could reel the leaders in at will.

At the first of two iiNet intermediate sprints of the day, at Bethany, 28 kilometers into the stage, it was Bobridge who collected the maximum points ahead of Westra and Belkov.

The second time through Bethany, at 60 kilometers, it was Durbridge in front with Belkov and Westra crossing behind him.

After the second loop through Tanunda the breakaway group maintained their lead up to the Subaru King of the Mountain Category 2 climb of Checker Hill where thousands of fans and cyclists dotted the fire ravaged landscape waiting to cheer them on.

Over the top is was Bobridge first ahead of Durbridge, Westra and Belkov but even they expected their time at the front would soon come to an end as the gap to the peloton came down.

“To be honest, when we heard we had only 20 seconds or so over the bunch, all the guys pretty much gave up,” said Bobridge. “It was an all day game. We played it perfect and stayed away.

“Having Luke Durbridge along in the break, not only another Australian but a good mate of mine, was an advantage,” he said. “The other advantage I had was knowing the roads.”

Bobridge admits he didn’t want to make the same mistake he made at the recent Australian Championships when he ‘went too early’.

“I learned a lesson at the Nationals,” he said.

“The bunch was charging just behind us but (today) I kept it cool. I’ve always been aggressive in this race but (this is my) first time winning a stage and being the leader tomorrow… I’m speechless.”

Durbridge says all four in front contributed to the attack.

“We were four big engines at the front and all very committed,” said Durbridge.

“Everyone did about the same amount of work and that made our breakaway work.

“We enjoyed a tailwind going down from Checker Hill and the Gorge was protected,” he explained adding that local knowledge was invaluable.

It was advice the European pair in front appreciated and followed.

“It was a good group, good riders,” said Westra. “The peloton never gave us much room (but) when we had a good gap over the climb we knew we might have a chance, so easy to chase back,” he said. “In the sprint for the stage Bobridge was too strong. Second for me was the best I could do ….. second in the season’s first World Tour race isn’t so bad.”

One team was more disappointed than most that the break wasn’t reeled in before the line and that was Giant-Alpecin who had hoped to set up sprint powerhouse Marcel Kittel for a host at the win.

“We were hoping for some more help in the chase, but everyone was a bit too relaxed,” said Kittel’s team mate Simon Geschke. “We could see them down the road, but in the narrow canyon, it was harder to organise the chase and Astana was blocking a little bit.

“Marcel made it over the climb pretty easy, so we are disappointed. We want to win a stage with Marcel, and today was a good opportunity we missed. It motivates us more to keep fighting here.”

Durbridge is the leader of the Cycle Instead Young Rider classification and was also named the Europcar Most Competitive for the day for his attacking efforts.

The Virgin Australia leading team after day one is the UniSA-Australia national team.

Tomorrow the race travels along a 150 kilometer route starting in stylish Adelaide suburb of Unley before climbing to Windy Point, through Upper Sturt and onto the testing circuits through Stirling in the Adelaide Hills.