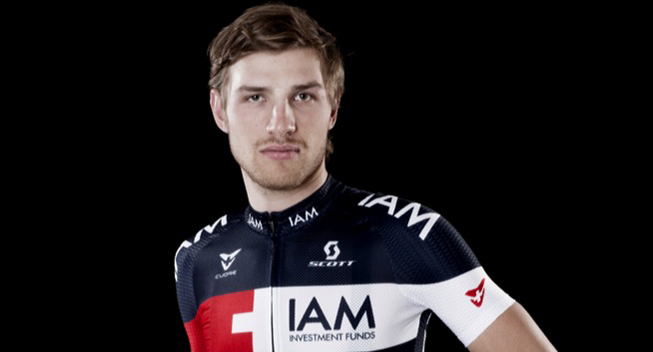 IAM Cycling’s Matthias Brändle claimed stage 5 of this year’s Tour of Britain, after breezing across the finish line ahead of Shane Archbold (An Post-Chainreaction) and Maarten Wynants (Belkin).

A breakaway group consisting of Andreas Stauff (MTN), Matthias Brändle (IAM), Maarten Wynants (Belkin) and Shane Archbold (An Post-Chainreaction), got underway earlier on today’s stage. And, from there, the escapees succeeded in establishing a modest advantage of just more than three minutes over the peloton.

However, all the while, Omega Pharma-QuickStep and Garmin-Sharp kept a watchful eye on the breakaway group.  And, as the race entered into the final 15 kilometers, their gap had been reduced to two minutes. And, a further 5 kilometers later, the gap was down to 1"30.

As the race approached the final climb of the day, Bradley Wiggins (Sky), Tinkoff-Saxo and Omega Pharma-QuickStep began to ratchet-up the pace back in the peloton.

At that point, the escapees were still clinging to a 60 second lead. However, Dylan Van Baarle (Garmin) decided to launch an attack from within the ranks of the peloton, in an attempt to bridge himself across to the lead quartet of riders. It was then that Brändle decided to make a go of it on his own – leaving his breakaway companions behind.

From there, Brändle crested the summit with a 25 second lead over the chase. However, a determined peloton commenced a furious pursuit along the descent in hopes of catching the lingering riders who still remained out front. But, Brändle managed to stay outside the grasp  of his rivals and seize the stage victory – finishing just seconds ahead of Archbold, Wynants and the encroaching peloton.