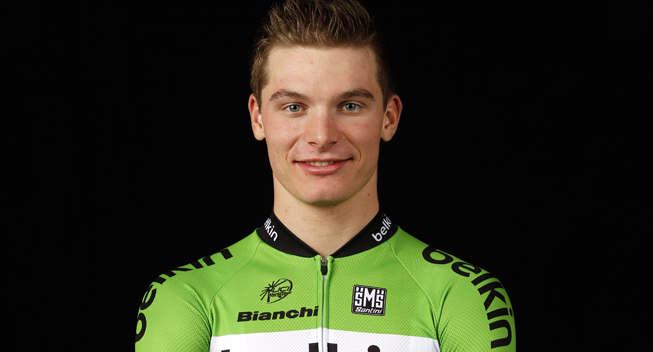 Moreno Hofland (Belkin) claimed his second stage victory in this year’s Tour of Utah, after winning stage 3 in a sprint finish today.

Today’s stage began shaping up for a sprint finale, as the the peloton entered the final finishing circuit at Miller Motorsports Park, with UnitedHealthcare and Team Belkin ushering their riders into position.

From there, Belkin delivered their man Hofland to the front, wherein the Dutch rider found himself in a perfect position – as he came around the final lefthand bend – to clinch the victory on the line.

Carpenter won the first bonus sprint points in today’s stage, to put himself within 12 seconds of the overall race leader – Jure Kocjan (SmartStop). In the  meantime, Eaton placed second, while Rathe took third.

Further into the race, Carpenter was also first rider over the KOM at Eureka – subsequently reclaiming his title as king of the mountains, as Wren and Summerhill followed in second and third place.

Following the Eureka climb, Carpenter decided to fall back into the ranks of the peloton, while his breakaway companions continued onward.

With 16.5 miles remaining, and a gap of two-minutes still holding, Summerhill decided to attack his fellow escapees – ultimately seizing the day’s final intermediate sprint points – followed by Rathe and Eaton.

From there, the peloton started to tighten the reins on the breakaway group. And, as the race entered the final laps of the raceway, they had the escapees within 40 seconds of their grasp.

With a looming peloton behind him, Rathe decided to make a go of it on his own. However, a determined peloton being pushed under the auspices of UnitedHealthcare, kept him in check.

As the race entered into the final few miles, Rathe was subsequently caught. And, with the final kilometer mark in sight, UnitedHealthcare and Belkin began ushering their respective riders to the front.

From there, Belkin did an expert job of setting up Hofland, that would ultimately lead to him nixing Luca Wackermann (Lampre-Merida) and Eric Young on the line.

Meanwhile, Kocjan held onto his overall race lead, after finishing safely in the group.

The Tour of Utah continues tomorrow, with 104.7-mile stage that features the race’s first summit finish – atop the 3,000-foot Powder Mountain.