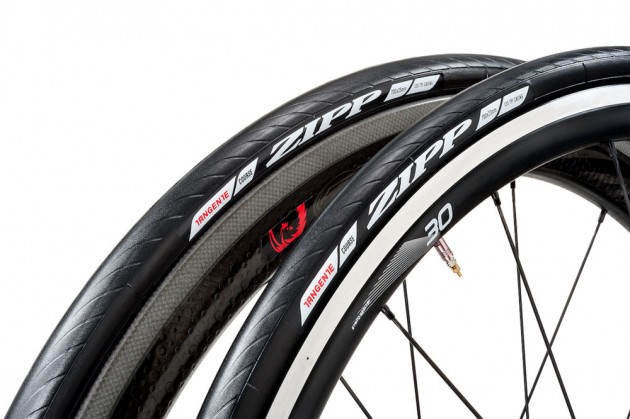 – The Course a 120 tpi all-around clincher

– SLSpeed, a handmade, 320 tpi tubular with a handmade cotton casing

The original Tangente lineup, was produced in collaboration with  Vittoria back in 2007, that were designed solely with aerodynamics in mind.

However, this time around, Zipp decided to focus on rolling-resistance on all three models of its new models – employing new rubber compounds, a new puncture-resistant belt in the Course model, along with new, softer, higher tpi-count casings.

According to Zipp, The Course clincher will be available in 23mm and 25mm widths, with claimed weights of 205 and 215 grams, and MSRP of $55 per tire.

A 180g and 190g, the Speed is the lighter of the two clinchers, and just as the Course, it’s available in 23mm and 25mm widths. However, it does not feature an anti-puncture belt the Course has, as it’s intended to be used as a race only tire. The price of the Speed is $65 per tire.

In addition, the SLSpeed uses a cotton/latex casing, and comes with a price tag of $100 per tire.

All three tires will be available in September.