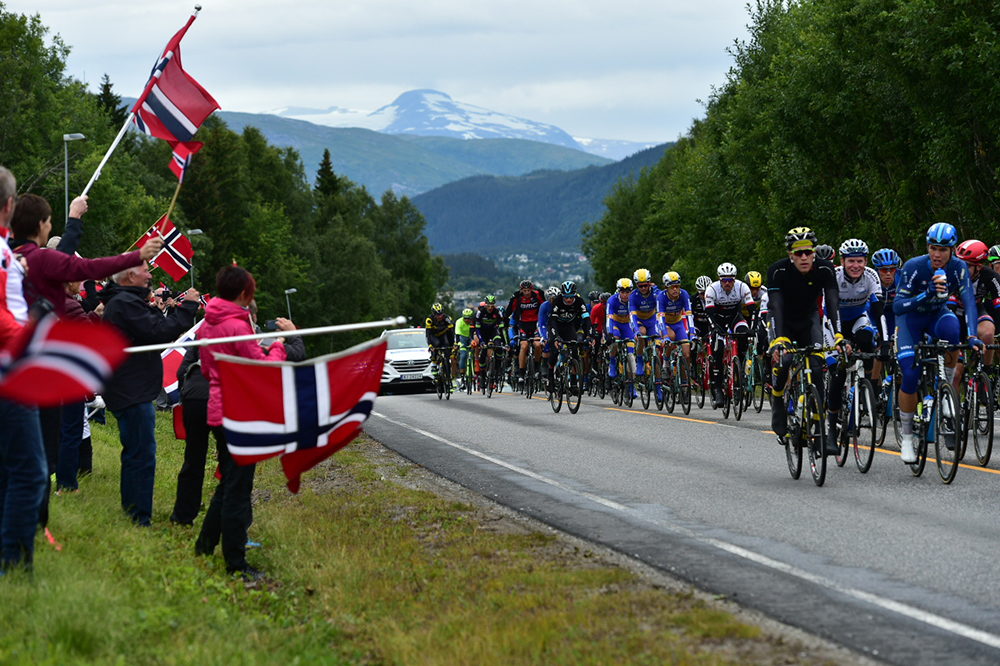 The Italian rider commenced an attack along the final climb of Korg mountain, to seize the stage honors with a solo victory more than 10 seconds ahead of his closest rivals.

After a series of failed attacks, Moscon accelerated clear during the last kilometer to finish in front of Stef Clement (IAM Cycling) and distant third place finisher – Oscar Gatto (Tinkoff).

As a result of his victory today, Moscon took over the race lead from teammate Danny van Poppel, and he now leads Clement by 15 seconds and Gatto by 30 seconds in the overall classification.

Italian prodigy Gianni Moscon of Team Sky made history at Korgfjellet as he rode away from the leading group before the 1-km to go mark to claim his first pro win at the age of 22. With one stage to go in the Arctic Race of Norway, he took over from his team-mate Danny van Poppel to lead the overall ranking with fifteen seconds over Stef Clement from IAM Cycling.

Gatto and Henao, early at the front…

Four riders in the lead

Four riders went away at km 30: Leigh Howard (IAM Cycling), Matt Brammeier (Dimension Data), Steele von Hoff (One Pro Cycling) and once again Oss who initiated that move. They got a maximum advantage of 2.30 ten kilometers further. Amund Grøndahl Jansen (Joker Byggtorget) and Fridtjof Røinås (Sparebanken Sør) tried to bridge the gap but were reeled in with 26km to go while the deficit of the peloton was down to 1.30 with Team Sky and Katusha very active at the front of the bunch.

Right at the beginning of the 8.9km long final climb, Brammeier and Von Hoff got dropped. Sylvain Chavanel (Direct Energie) and Bjorn Tore Hoem (Joker- Byggtorget) were first to rejoin Howard and Oss with 6km to go. Henao was on the move again 4km before the top. It wasn’t steep enough for him to climb like Colombians often do so another Team Sky rider, Norway’s Lars-Petter Nordhaug, tried his luck with 3km to go but the decisive move happened while there were 2km remaining as Stef Clement (IAM Cycling), Hoem and Henao got a gap for themselves. Gianni Moscon (Sky) went across and rode away solo with a little more than 1km to go. Like at the very beginning of the race, Gatto and Henao fought for podium places whereas Norwegian up and coming rider Odd Christian Eiking of FDJ, also 22 year old, crossed the line in fifth position. As well as the queen stage, Moscon won the special price of the day: 500 kg of whole salmon – given by Polar Quality. A versatile rider, the u23 Italian champion for road racing last year is tipped as one of the most interesting prospect worldwide. His first pro victory will be remembered.

Gianni Moscon declared: “When you pass the line to win your first pro race, it’s an incredible feeling. I’m very happy for this win. I wanted to win today. I knew I have a good shape at the moment. This victory is good for the morale and for the last part of the season. It’s the fruit of a great team work today. We chased the breakaway with Katusha. We went full gas on the first climbs. At the end I felt very good. To lead the Arctic Race of Norway is very nice. We’ve been through beautiful landscapes. It’s my first time in Norway but I’ll come again. It’s a really nice country. It’s an important race, very well organized with a lot of big teams taking part. I didn’t think about the 500kg of salmon when I was racing but it’s a very nice gift. I’m still searching this season what type of rider I am. I think I’m a good rouleur and climber but I don’t know exactly which are my favourite courses. Every race I go to, I give my best. I’ve had this mentality since I started cycling and I want to continue this way.”