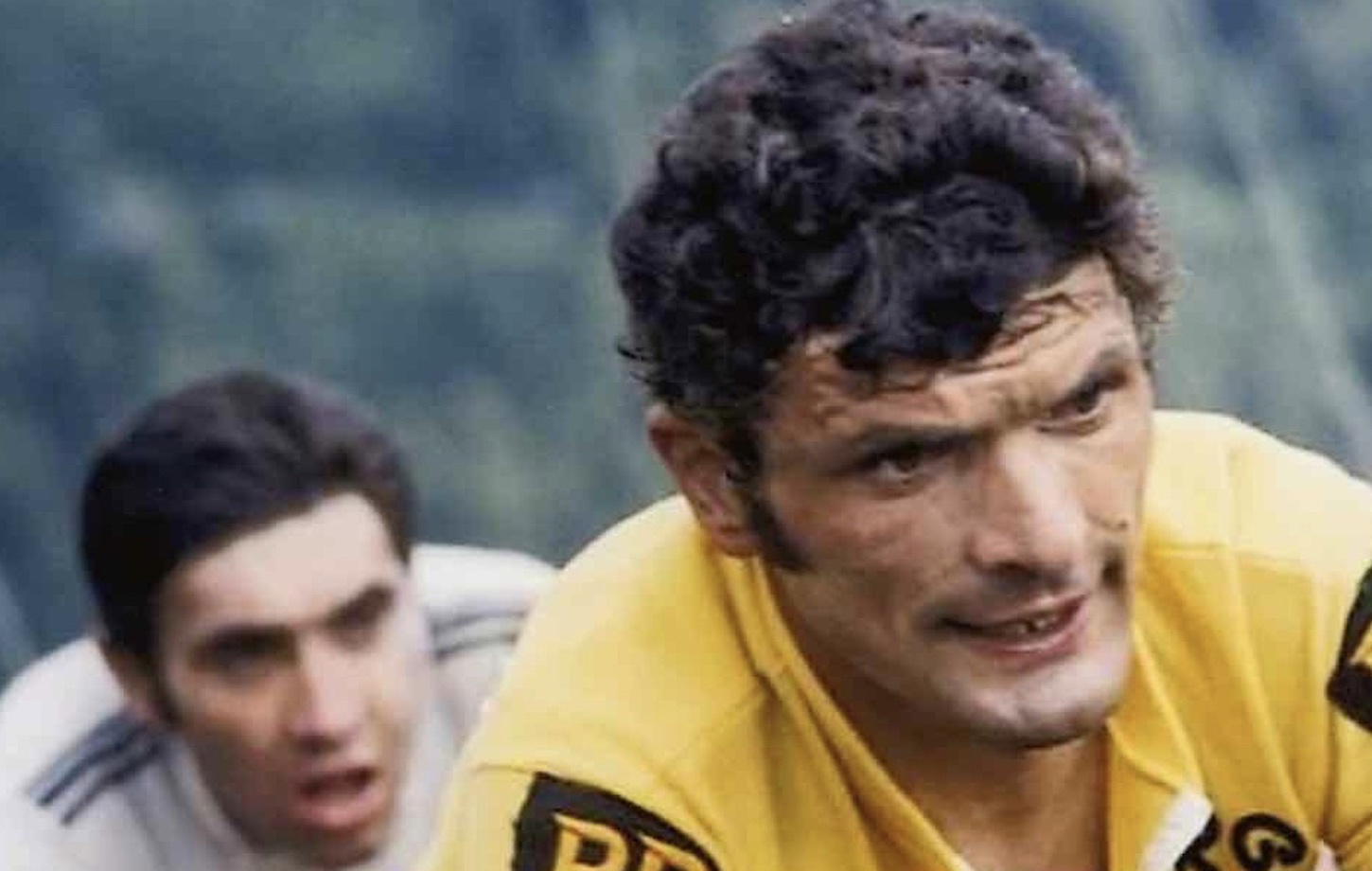 A belated happy birthday to Bernard Thévenet, who was born on January 10, 1948.

The French rider is best known for winning the 1975 Tour de France ahead of Eddy Merckx, thus ending the reign of the five-time champion, followed by a second victory in the French Grand Tour in 1977, this time beating Hennie Kuiper of Holland and Lucien Van Impe of Belgium.

Thévenet also claimed victory in the 1975 and 1976 Dauphiné Libéré.

Thévenet was born to a farming family in the small hamlet of Le Guidon, which is located in the Saône-et-Loire region of Burgundy, France.

According to Thévenet, he was first drawn to cycling in 1961, when that year’s Tour de France passed through the village where he was serving as a choir boy.

“The priest brought forward the time for Mass so that we could watch the riders go by. The sun was shining on their toe-clips and the chrome on their forks. They were modern-day knights. I had already been dreaming of becoming a racing cyclist and that magical sight convinced me definitively. It was never that magical when I was actually in the peloton of the Tour!”

Thévenet received his first bike at the age of 14, a gift he received from his parents after passing his school examinations.

Despite being constantly tethered to work on the family farm, Thévenet somehow managed to escape on occasion and compete in some near-by races.

In fact, his parents only learned of his participation after they read their son’s name in the race results listed by the local newspaper.

This resulted in a family row, forcing the local cycling club president to intervene on the young rider’s behalf, subsequently quelling his parents’ anger by inviting them to the next race, which Thévenet won.

From there, Thévenet continued to excel in racing, becoming the junior champion of Burgundy in 1965 and 1966, and later capturing the French junior national championship title in 1968.

This in turn, caught the attention of Mickey Weignant, who was the manager of the ACBB cycling club in Boulogne-Billancourt, who quickly recruited the fledging pro.

At the time, the ACBB was recognized as being a development team for professional organizations, particularly for the venerable Peugeot team.

Thévenet went on to ride for the amateur team of Jean de Gribaldy, Cafés Ravis-Wolhauser-de Gribaldy, in 1968, which won the amateur Route de France. However, his career was briefly halted when he was required to fulfill his military service in 1969.

“I wasn’t even a reserve in 1970 but, because two riders in the team had fallen ill at Peugeot, the directeur sportif picked me two days before the start”, he recalled. “The team’s director, Gaston Plaud, had to call a neighbor in my village because no one had telephones back then.”

That year’s Tour de France began in Limoges, which Thévenet recalled being both an exciting and fearful experience for the neo-pro.

“I can remember perfectly getting to Limoges [for the start]. I was anxious and scared at the same time, but full of pride. I was given a new suitcase, seven jerseys, six pairs of shorts, overclothes, sweaters, shirts and so on and so on. Everyone else had a brand new bike, but not me, because I wasn’t on the team’s entry list.”

Nevertheless, Thévenet won the mountain stage to La Mongie, leading the peloton most of the way up the Tourmalet.

“That evening, it was all clear [j’ai compris bien des choses]. That I’d saved my season and, because of that, my job, because the obligatory two-year contracts for new professionals didn’t exist then.”

Thévenet just missed out on a spot on the podium during next year’s Tour de France, after finishing in fourth place, while also claiming a stage victory.

1972 saw Thévenet crash badly during a decent, briefly leaving him in a state of amnesia.

“Am I riding the Tour de France!”, he recalled saying to the team car once he started to regain his memory.

Yet, a defiant Thévenet refused to abandon the race, and four days later won the stage to Mont Ventoux.

In the 1973 Tour, Thévenet finished second behind Luis Ocaña. The following year, he was forced to abandon on stage 11 due to illness.

However, in 1975 Thévenet finally stamped his authority on the Tour de France, not only winning the overall title, but also dethroning five-time winner of the maillot jaune (yellow jersey), Eddy Merckx, during an epic attack along the Col d’Izoard.

Merckx, who was suffering from back pain caused by a punch from a spectator, struggled to try and get back on terms with Thévenet, but to no avail.

Cycling journalist, Pierre Chany, wrote about the stage, saying, “Those who were there will be slow to forget Bernard Thévenet’s six successive attacks in the never-ending climb of the col des Champs, Eddy Merckx’s immediate and superb response, the alarming chase by the Frenchman after a puncture delayed him on the descent of the col, the Belgian’s attack on the way to the summit of the Allos, his breath-taking plunge towards the Pra-Loup valley, his sudden weakening four kilometres from the top and, to finish, Thévenet’s furious push. The end of the race was frenetic. Has Eddy Merckx’s long reign in the Tour de France come to an end on the Pra-Loup. Some think so; others believe that it will happen tomorrow.”

British journalist, Graeme Fife, also wrote, “Thévenet caught Merckx, by now almost delirious, 3km from the finish and rode by. The pictures show Merckx’s face torn with anguish, eyes hollow, body slumped, arms locked shut on the bars, shoulders a clenched ridge of exertion and distress. Thévenet, mouth gaping to gulp more oxygen, looks pretty well at the limit, too, but his effort is gaining; he’s out of the saddle, eyes fixed on the road. He said he could see that one side of the road had turned to liquid tar in the baking heat and Merckx was tire-deep in it.”

To add to Merckx’s dismay, a woman clad only in a bikini could be seen standing beside the road waving a sign that read, “Merckx is beaten, the Bastille has fallen.”

Thévenet won the Tour by three minutes over his Belgian rival, which that year finished on the Champs-Élysées for the first time.

Thévenet won his second and last Tour de France in 1977, but not without overcoming a pre-season medical condition, wherein he had been hospitalized that winter with a liver ailment that he later attributed to long-term use of steroids. Still, he managed to triumph over Kuiper and Van Impe.

Thévenet began the Tour as the pre-race favorite, mainly because the course favored his talents, whereas the previous year’s winner, Van Impe, was more of a climber. Less mountains meant less of a chance for the Belgian rider.

The course also proved to be ill-suited for the reigning world champion, Kuiper, while Merckx’s spirit appeared to have been broken by his loss to Thévenet two years earlier.

Thévenet’s career really began to wane after 1977 however, which saw him abandon next year’s Tour after only the second mountain stage.

He left the Peugeot cycling team in 1979, and signed for the Spanish team Teka, where he managed to muster just two Six-Day race wins alongside the Australian rider Danny Clark.

Thévenet returned to a Peugeot for his final seasin in 1981, where he won a stage in the Circuit de la Sarthe.

During his retirement, Thévenet became directeur sportif for the La Redoute team of Stephen Roche in 1984, and later helmed the RMO team in 1986 and 1987.

Thévenet then worked as a television commentator, opened a cycling apparel company under his name and became race director of the Critérium du Dauphiné in 2010, after the race was taken over by the Amaury Sport Organization.

When asked if being a pro cyclist was a hard career, Thévenet remarked by saying, “it was easier than being a French farmer.”