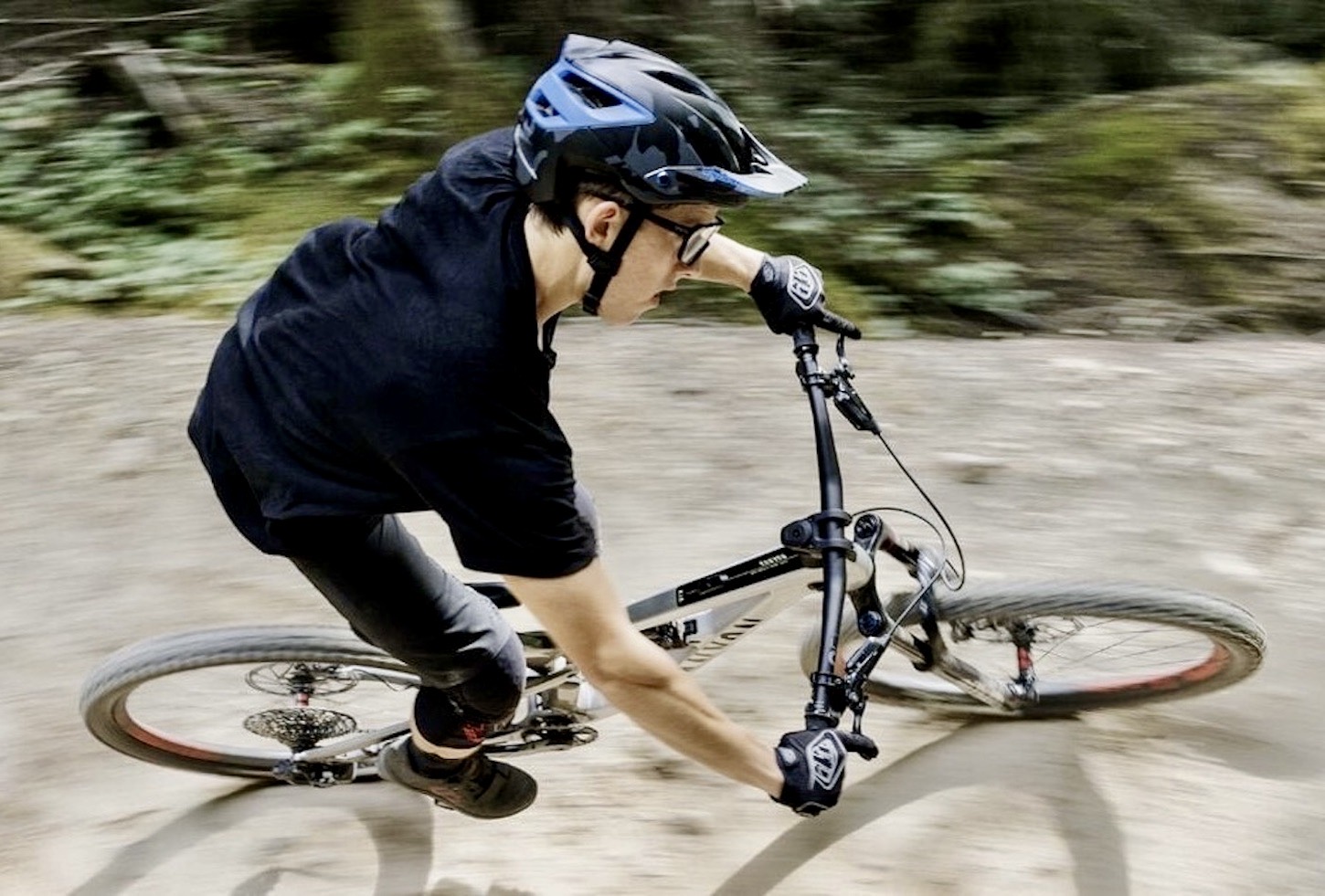 According to Canyon, the new K.I.S system doesn’t rely on friction like previous designs, instead its internals create a smooth and balanced centering force that’s designed to filter out front-wheel deflections, wheel flop and power surges with the goal of reducing rider fatigue.

Inside the K.I.S, there’s a built-in rotation stop that prevents the system from over-extending or breaking in the event of a crash, with a cam ring that’s bolted around the middle of the fork steerer. From there, the cam is connected to a coil spring that’s anchored within the top tube via an ultra-strong synthetic fiber band. As the rider rotates the handlebar, one side of the band increases in tension and pulls the spring, creating a small force generated by the band and spring that works to create a self-centering effect on the bar

Additionally, the slider is the only part of the system that’s visible, which allows the rider to adjust the K.I.S stabilizer, while everything else is housed inside the head tube.

To adjust the system, the rider simply loosens the 4mm Allen bolt and slides it forward towards the head tube, which in turn lowers the self-centering force.

Similarly, by moving it back, increases the centering force. Moreover, there’s a small window at the front of the head tube that enables access to the cam ring clamp bolt, giving access to the set-up in the event the system needs to be reset/realigned, or the fork has to be removed.

Claiming to be maintenance-free, and able to last a lifetime, the K.I.S system will be available on select Canyon bikes, with the German brand’s Spectral 8 K.I.S being the first model to feature the system.

Invented by Jo Klieber at Syntace and engineered by Canyon into the trail ripping Spectral CF 8, K.I.S. is a simple but ingenious technology that uses custom springs, ultra-strong polymer fibre bands, and a precisely shaped cam ring hidden inside the frame to actively centre your bars while riding. Unlike steering stabilisers of the past, K.I.S does not rely on friction, it and creates a perfectly tuned centring force to make riding trails smoother, faster, and more controlled.

To understand why, you only have to look at the self-centring control systems used on many other vehicles. Cars, boats and even planes have controls which self-centre. When it comes to bikes, the addition of a central reference point and counter force when steering offers clear benefits to almost every aspect of riding. From increasing stability at any speed and more predictable handling to filtering out front wheel deflections and reducing rider fatigue, K.I.S even helps to control drifts and minimise understeer. When the trail heads back uphill the system keeps on giving, making climbing more efficient by actively combating wheel flop, reducing the power surges required from the rider to maintain balance.

Fully integrated inside the frame, K.I.S. adds a measly 110g of weight to the mainframe and the only difference you will see on the bike is the adjustment slider on the top tube. From here the tension of the system can be adjusted to suit the rider’s size, weight, style, and local terrain.

Manufactured from high strength materials and protected inside the frame, the system is also maintenance free: there is no need to grease, clean, or replace any moving parts. What’s more, the built-in rotation stop prevents the system from over-extending or breaking in the event of a crash.

Hold your line through rough sections, maintain composure at high speeds, and climb more efficiently. Thanks to K.I.S. bike handling has truly turned a corner.

Canyon, together with Liteville (part of the Syntace family) are the exclusive brands to bring this new technology to the market. For Canyon, the Spectral CF 8 K.I.S will be the debut model equipped with the system. Perfectly balancing performance and value, the bike features Fox’s benchmark Performance Elite suspension, trusted Deore XT transmission and brakes from Shimano and reliable XM1700 wheels from DT Swiss, wrapped in grippy Maxxis rubber. As well as introducing K.I.S., there are also updates to the rest of the Spectral range for 2023, including an all-new colour and spec for the flagship Spectral CFR.