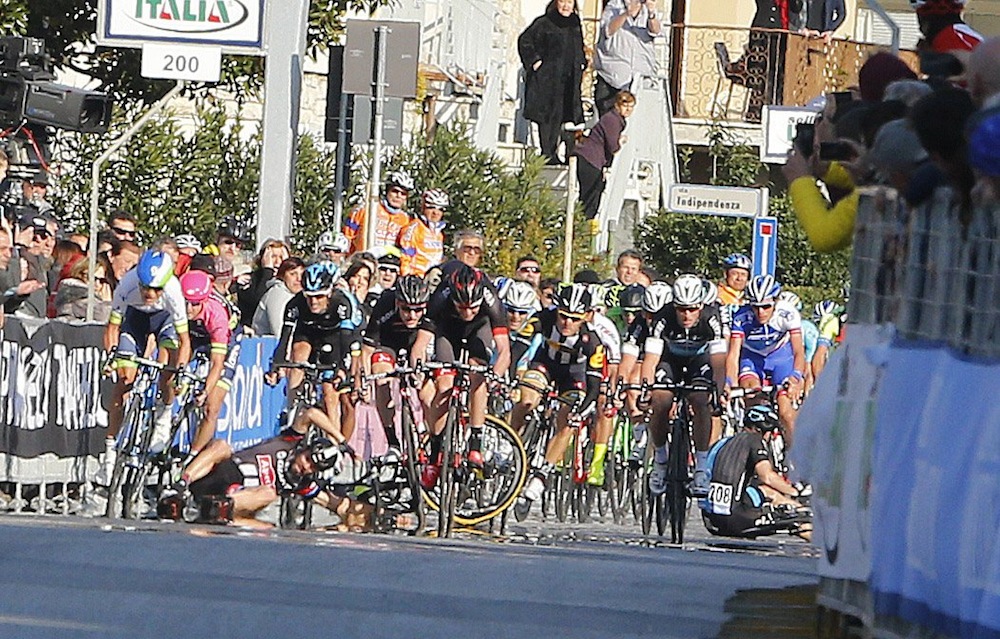 Etixx-Quick-Step is requesting an investigation, after Mark Cavendish’s bike proceeded to throw its chain during the final sprint in today’s Tirreno Adriatico stage – subsequently causing a crash.

Cavendish’s bike will undergo a thorough evaluation this evening, after a chain problem caused him to swerve into rival sprinter Elia Viviani during the waning moments of today’s race.

According to the report, while Cavendish “rose out of saddle” in order to move to the front, after a few revolutions, he briefly lost control of his bike when the mechanical failure occurred. As a result, his rear wheel jumped and overlapped with Viviani’s front wheel, which led to the crash.

“When I tried to go, my chain dropped off from the big chainring to the right, and the momentum from the sudden loss of torque caused me to move right,” Cavendish said. “There’s nothing I could have done to avoid it, and it’s a miracle I didn’t crash. I feel sorry for Elia Viviani and the other guys involved. Hopefully it’s nothing serious.”

“[The mechanical fault] made him make that strange move, and obviously Viviani had no chance,” Etixx-Quick Step’s sport and development manager, Rolf Aldag said. “Cav feels really sorry for him, we feel sorry for him. We need to analyse how that happened and to make sure it doesn’t happen again.”

“We have to analyze it, but if you see him accelerating from the helicopter, you see his rear wheel jump, then you see his chain is off is in the front, so that’s very likely what happened,” Aldag added. “Either when he waited that moment to accelerate, or when he started his acceleration, the chain came off to the right [of the big chainring].”

When the accident happened, Aldag explained that Cavendish would not have been shifting and would have already been in his 53-tooth chainrings and his 11-tooth rear cog.

“We also had an issue with Tom Boonen in Qatar, also dropping the chain off the right side. We are not sure, so it’s unfair to blame anyone, or a product, but it’s clear that the chain came off,” Aldag said.

“We renewed some of the products, but now it’s all theory. It fell off the big ring to the outside, so you can’t say he mis-shifted or something in the sprint, but it goes so quickly. We have seen it again in the bus, we will look at it again tonight, and we will have Cav try to remember how it happened.”

Team Sky directeur sportif Dario Cioni confirmed that Elia Viviani has undergone X-rays to ensure there are no broken bones from the crash.

“Elia took a big bang at the end there and has lost a lot of skin,” said Cioni. “It was encouraging to see him able to finish the stage though, and they are running some X-rays on him to make sure there are no broken bones.”