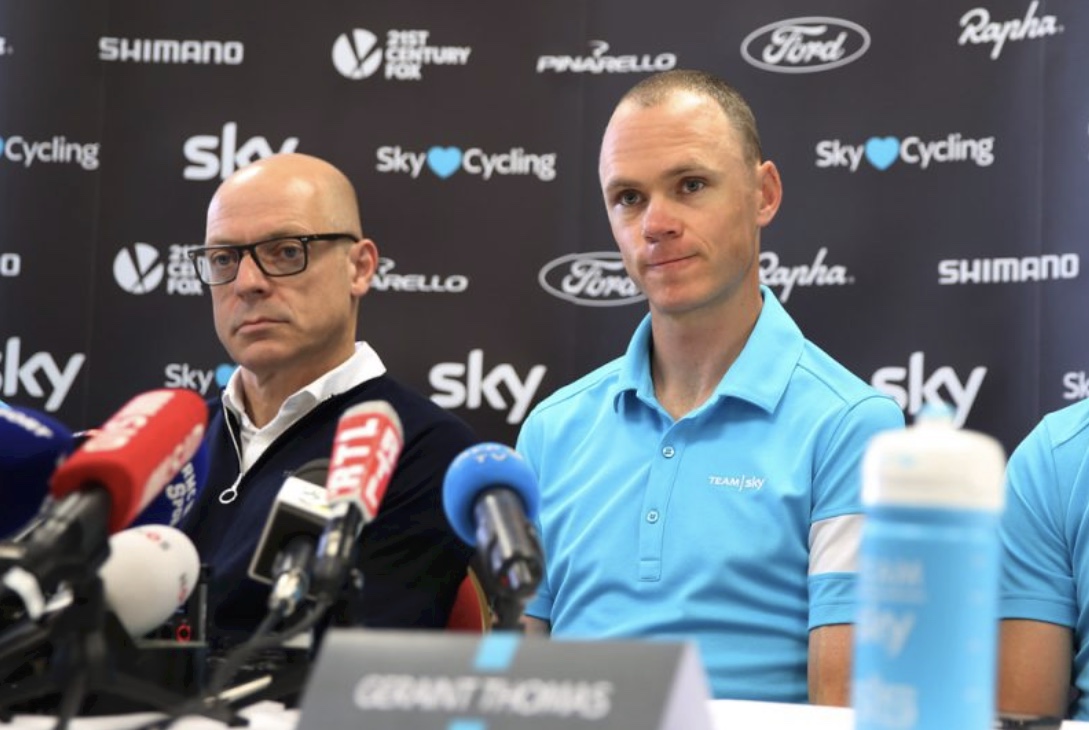 Chris Froome has finally come out publicly to voice his support for Team Sky director Dave Brailsford, who’s been under fire ever since UK Anti-Doping has been investigating a ‘mystery package’ sent for Bradley Wiggins during the 2011 Criterium du Dauphiné, and whether anti-doping rules were broken by the team.

Brailsford has maintained all along, that the package contained a legal decongestant – Fluimucil – but the team has since been unable to provide records to back up the claim.

Team Sky has since accepted “mistakes were made” over how medical records relating to the package were kept but denies breaking anti-doping rules.

As of today however, Froome submitted a statement openly pledging his support for his team boss, saying, “Dave Brailsford, he has created one of the best sports teams in the world. Without Dave B, there is no Team Sky.”

“He has supported me throughout the last seven years of my career and I couldn’t be more grateful for the opportunities and the experiences I’ve had.”

“By his own admission, mistakes have been made, but protocols have been put in place to ensure that those same mistakes will not be made again. I know it will take time for faith to be restored, but I will do my utmost to ensure that happens, along with everyone else at Team Sky.”

Both Wiggins and Brailsford continue to deny any wrongdoing over the contents of a mystery package. Wiggins has already been in the spotlight after it was revealed he received special clearance for three injections of triamcinolone, a powerful corticosteroid, to treat a pollen allergy before his three biggest races in 2011, 2012, and 2013.

However, he would have committed a doping offense if he received a triamcinolone injection at the Dauphine without the required permission, known as a therapeutic use exemption (TUE).

Dr Richard Freeman, the former Team Sky medic, and Wiggins deny it was triamcinolone and say the drug delivered was the legal decongestant Fluimucil, administered via a nebulizer.

This explanation was first aired publicly by Brailsford to British Parliament’s Committee on the Culture, Media and Sport (CMS) in December, wherein Brailsford promised he would provide documentation to prove it.

But earlier this month, in a second hearing, UKAD chief executive Nicole Sapstead said her agency’s investigation had found no records to either prove or disprove it was Fluimucil and an “excessive amount” of triamcinolone was kept in Manchester for just one rider.

Sapstead’s revelation led the committee’s chairman Damian Collins MP to claim the reputation of British Cycling and its professional offshoot Team Sky was “in tatters”.

Brailsford last week challenged “inaccurate assertions and assumptions” relating to the UKAD investigation, saying there is a “fundamental difference between process failures and wrongdoing”.

And Froome apologized on behalf of Team Sky’s riders for the handling of this episode, while issuing his own defence of the British squad established by Brailsford in 2009.

“I completely understand why people feel let down by the way in which the situation has been handled, and going forward we need to do better,” Froome added.

“I would like to apologize for this on behalf of myself and the other riders of Team Sky who feel passionately about our sport and winning clean. I believe in the people around me, and what we are doing.”

Froome also voiced his disappointment for the way in which the media has negatively portrayed his team over the past few months, but said he also understands that the situation was been handled poorly as well.

“It disappoints me hugely to see the way in which Team Sky has been portrayed by the media recently. It does not reflect the support crew and the riders that I see around me,” he said.

“At the same time, I completely understand why people feel let down by the way in which the situation has been handled, and going forward we need to do better.

“I know it will take time for faith to be restored, but I will do my utmost to ensure that happens.”