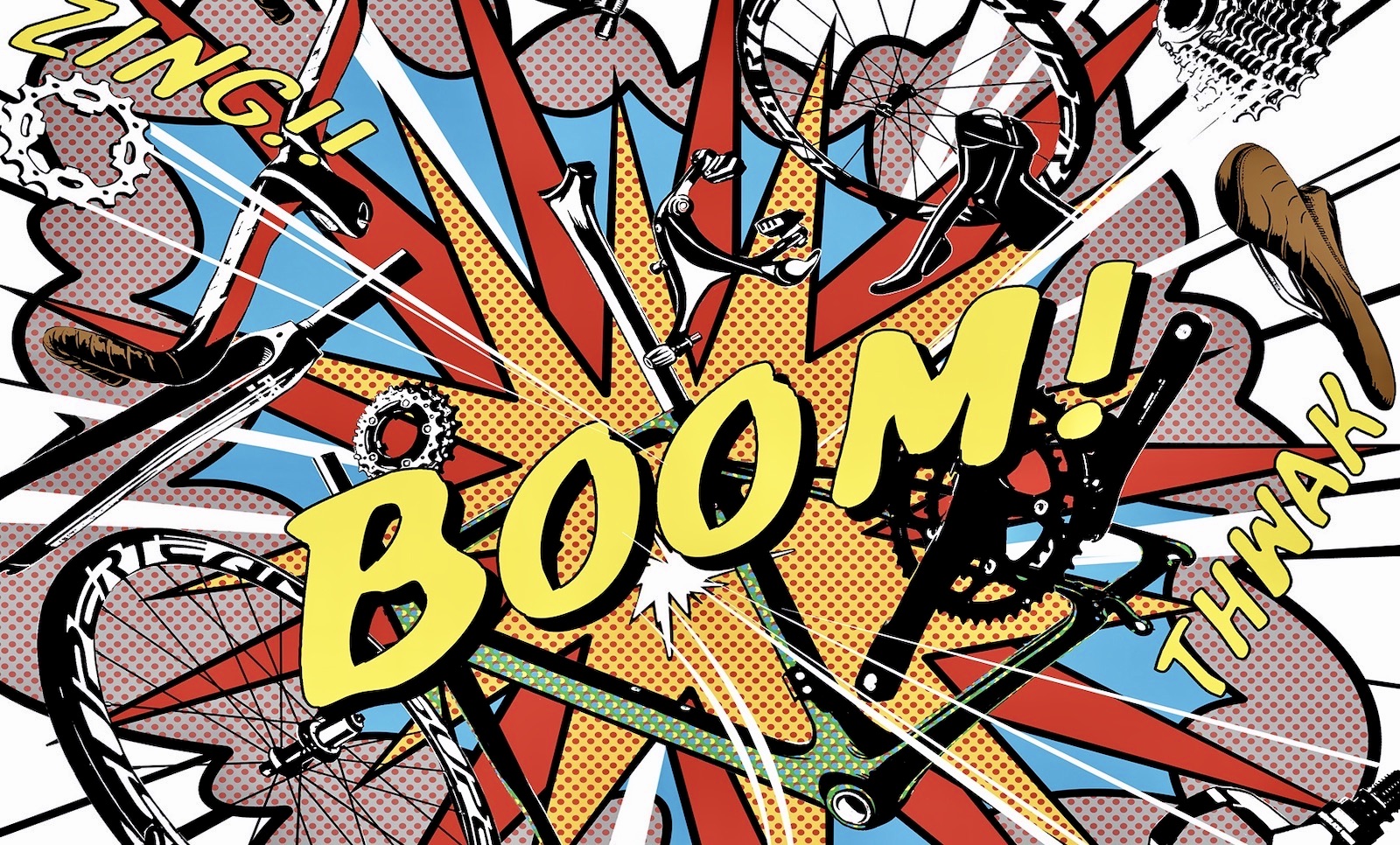 For most roadies, a “collision” usually means either a car-on-bike crash or sometimes, a bike-on-bike crash. But those aren’t the only hazards we face. In one famous crash, German racer Marcus Burghardt collided with a golden retriever in the 2007 Tour de France. And in the 2014 Tour de France, disaster was narrowly averted after a small dog darted in front of the peloton during the final sprint in stage 2. That same year, spectators taking selfies caused several crashes with riders in the opening stage of the Tour. You don’t have to be a pro to encounter these dangers. You’ve likely had your own near misses, maybe even collisions.

Maybe now, more than ever. Have you noticed all the people walking in the roadway over the last year?  Any confusion or close calls? I’ve noticed it, with many encounters with people walking with their backs to traffic over the last year while riding through neighborhoods. Who has the right-of-way, and what would happen if you collided with these walkers, joggers, family group riders, or their dogs

For the main points you need to know, see the What You Need to Know to Protect Yourself and Your Bike section at the end of this article.

Cyclist-pedestrian collisions are as old as cycling itself. In 1842, a cyclist collided with a little girl in Glasgow; laws prohibiting riding on sidewalks were soon passed wherever bicycles began to appear. Collisions between cyclists and pedestrians still occur, and today, the potential for collisions has only grown. With public health measures that have encouraged people to take to the streets for physical and mental health recreation breaks during COVID lockdowns, the potential for cyclist-pedestrian collisions has only increased.

And because people do incur injuries when cyclists and pedestrians collide, an issue that typically arises for the injured person is “who’s going to pay my medical and other bills?” While collisions are nothing new, these circumstances — pedestrians, dog-walkers, runners, skaters, and cyclists, all using the streets together, are somewhat new. What are the rules when the entire roadway becomes a kind of multi-use superpath?

Rules That Will Keep You Out of Trouble

Bicycle injury attorney Charlie Thomasli of the Bike Law Network notes that many states do not have clear laws that govern how cyclists and pedestrians interact on multi-use paths. And with these new uses of our streets as a de facto multi-use path, we’re just starting to work out how these kinds of crashes get resolved, so if there is a collision, Thomas notes that you’ll want as many facts on your side as possible. While the facts of every case will be unique, and the applicable laws may vary depending on the state, we can still apply the existing legal duties to the behavior of the people involved in a crash, and the facts of the case, to figure out who caused the crash and is liable for the other person’s injuries.

Consider what can go wrong — you’re riding on the roadway, and up ahead somebody is walking their dog on one of those retractable leashes. Or suppose it’s a mother walking with a young child. Or there’s a family up ahead on bikes. Or a jogger is running with headphones. Each of these situations presents a potential for a collision when you pass. These are all familiar scenarios on multi-use paths. And now, we’re dealing with them on the road.

There are probably hundreds, perhaps thousands of scenarios like these, in which something goes wrong, and a collision results. And in each of these scenarios, the question will be who did what, and did they have a responsibility that they didn’t meet? Sometimes, you’re going to be dealing with a situation — the dog or child who runs across your path — in which you have a legal duty to avoid a collision, but the child or dog does not have a corresponding legal duty to you. And if the dog or child ran off unexpectedly, the parent or dog owner may not be at fault either.

Other times, in a collision with an adult pedestrian, the pedestrian will have a legal duty to avoid a collision with you. But it’s not just the pedestrian’s actions that will be at issue. You, the cyclist, also have legal duties to everyone else on the road, and your own actions will be examined to determine if you were using the normal care expected of an adult. Was your speed reasonable for the conditions? Did you attempt to pass at a safe distance? Did you give an audible warning as you were approaching from behind? Did you make a reasonable effort to avoid the collision? Both you and the pedestrian will be scrutinized for what you did and didn’t do.

There’s a reason all these questions are asked — everybody involved wants to know who pays the bills? It will virtually always be an insurance payout, but whose insurance foots the bill? That depends on who is at fault in the collision. And which insurance policy applies? San Francisco bicycle injury attorney Miles Cooper says that in crashes like these, a homeowner’s or renter’s policy functions as a personal liability policy, so whether a cyclist hits a pedestrian, or a pedestrian walks in front of a cyclist, the homeowner’s or renter’s policy of the person at fault would cover the cost of defending a lawsuit, and payout, depending on liability.

The bottom line — the best scenario is to avoid injury and damages to both you and the pedestrian, so even if you have the right-of-way and the pedestrian is wrong, it makes sense to make sure that you have as many of the facts in your favor as possible. This is what makes the difference between getting your bike replaced by the pedestrian’s insurance coverage (because you had the winning argument), and being out your bike and paying for the pedestrian’s medical bills, destroyed property, and pain and suffering (because you had the losing argument). So to protect yourself and your $10,000 bike, give them plenty of notice, plenty of room, and keep the rubber side down.

What you Need to Know to Protect Yourself and Your Bike

After retiring from racing in 1993, he coached the Saturn Professional Cycling team for one year before heading off to law school. Mionske’s practice is now split between personal-injury work, representing professional athletes as an agent, and other legal issues facing endurance athletes (traffic violations, contract, criminal charges, intellectual property, etc.).