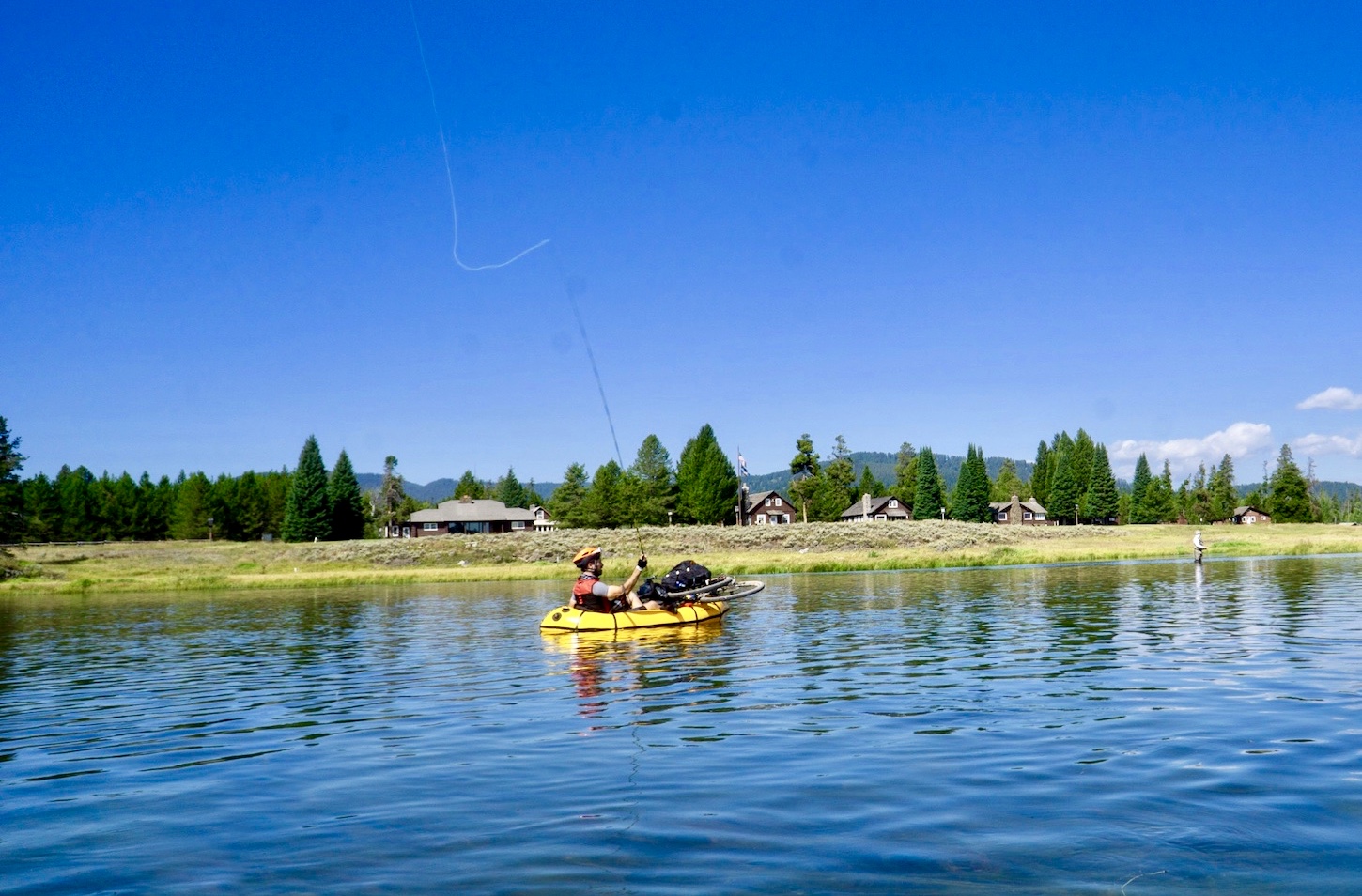 words and photos by Steve Graepel

I’m scratching my head over a bin of hooks–each knotted with tufts of fur and feathers–asking myself why does one need so many flies to catch a fish? For the same reasons I like cycling, I’ve always been drawn to the simplicity of fly fishing. A rod, line, and hook to hoodwink a fish, fly fishing is a sport of purity. But unlike cycling, fishing has always fallen down my long list of priorities. It’s easier to swing a leg over the bike than to drive a 100 miles to stand in a river.

Thick with fat trout, the Henrys Fork requires what anglers call “a Ph.D. in fly fishing.” And I’m redshirting, walking on as a freshman. It takes years to master the sport, let alone fish Henrys Fork. But I know what I don’t know and I call over the shop keeper, who’s wearing a trucker hat embroidered with “Orvis Certified Guide”.

If the Henrys Fork is graduate school, an Orvis Certified Guide is the dean. The gentleman guides me to a corner of the row of bins, pontificating on the pros and cons of Danglers, Toddlers, and Assassin Jigs, asking me if I’ll run a single or two fly set up. Lost in the jargon, my eyes track on a giant bright yellow fly called Galloups Sex Dungeon.

“That’s a streamer. It’s for big fish. You won’t need them where you’re going.” He shuts me down and plucks an assortment of small, dark and otherwise dull looking flies and plops them in a small plastic Solo cup.

“You have insect repellant … and bear mace, right? Where you’re going is full of griz.”

He meant grizzly bear. And it was a real worry. Just the week before, Grand Teton National Park closed a portion of the park due to a close grizzly bear encounter.

Except for a thin swatch of Yellowstone, Idaho doesn’t have any National Parks. But arguably it has something better: obscurity. With it comes fewer crowds and more wildlife. And the northeast corner of Idaho–that part tucked up against the Parks–has the largest population of griz in the lower 48. It also hosts a stretch of railroad that was yanked of its tracks and converted to the trail–30 plus miles of remote gravel along rivers choked with piggish trout. The idea of flicking flies by bike along the Teton’s western slope has spun in my brain for years. Grizzly bears be damned.

With a fresh box of hackled hooks (and now bear spray), I point the truck northward towards Montana and park the rig at Big Spring, the protected headwaters of the Henrys Fork. The source of a river is always a mystery. But here at Big Spring, it’s crystal clear. 120 million gallons of crystal clear each day in fact. The snow that fell some 20 years ago slowly filters out from under the hill and bubbles out as a full-fledged river and is a primary tributary of the mighty Snake River.

I rack my EXPLORO bike and I lean out over the bridge, drooling over fatted lunkers darting below. A protected spawning ground for native cutthroat trout, fishing Big Spring is strongly prohibited. So I rack the rods and head east towards Harriman Park to continue my hunt for lunkers.

With an average snowfall of 16 feet, snowmobiles swarm to Island Park in winter. Nearly every backroad in the region is prominently marked and mapped on poles standing some eight feet over the gravel. There are literally hundreds of miles to explore, but I follow the markers pointing to Thurman Ridge and down the backside to Harriman State Park.

I’ve heard of the Harrimans but I never made the connection to Idaho or their place in American history. At the turn of the century, E.H. Harriman made the family fortune flipping failed railroads. He plunked his spare change on spectacular plots of land. As one neighbor put it, “he collects mountains as other men collect china.” His prized possession was his sportsman ranch along the shores of the Henrys Fork.

At the Ranch, a row of simple brown cottages stands to watch over the river. The family built one for the boys, one for themselves, a dining hall, a guest cabin, and a few other homes that the Guggenheims eventually built. Friends in high places.

Every summer the family would fly in from New York to join the cattle drive and fish and hunt in the Caribou Mountains. Seems Mrs. Harriman was quite a shot. Her cabin was strewn with furs and mounts of deer and bear.

The Railroad Ranch, as it’s become known by fly fisherman, is a spectacular spill of water, holding some 4000 trout per mile. I poke my head in a few buildings, pedal to the backcountry yurt (where I’d make camp for the night), and then head down to the Henrys Fork’s shallow waters to try my luck with the fish. With the sun setting over Bishop Mountain, fishing the Henrys Fork is about as close to tranquility you can find outside the saddle.

To spice things up, the following morning I inflate my packraft–a small inflatable raft suited for backcountry travel–and drift the eight-mile stretch to the Osborn Bridge. Skimming past the Ranch in my kiddie pool-sized boat, a pair of fly fisherman with thick Texan accents shout out “…that looks like more trouble than it’s worth!”

I chuckle to myself. In a river of a thousand casts, floating the Henrys Fork with my bike seems more productive than landing a fish. I spend the morning incredulously watching rainbows sip flies from the surface, ignoring my advances.

I pull up the rod, bounce down a small stretch of riffles and swap the boat for the bike and hustle over to the Mesa Falls Scenic Byway where I catch the old Union Pacific Rail-Trail, also referred to as Railroad Right-of-Way Trail.

Yellowstone was America’s first national park. Straddling a remote corner of Idaho, Wyoming and Montana, it’s never been easy to get to. Determined to bring visitors to the Park’s west entrance, E.H. Harriman ordered the construction of a Union Pacific line connecting St. Anthony northward to West Yellowstone, unlocking the park to throngs of summer visitors from the west.

The line was abandoned in 1979 and ties were removed shortly after. The Idaho State Park system converted the abandoned line to rail-trail for bikes and ATVs to enjoy. For me, the trail was a straight-arrow shot back to the truck, parked some 30 miles north.

I pass through abandoned tunnels and spy for fish in blue holes, hoping to snag some dinner and roll up to the Warm River cabin for the night. Wedged between the folds of the dense green canyon, the cabin is quaint at best. The rooms have been overhauled with bunks for 12, but otherwise it’s unremarkable–dare I say creepy. No water, no electricity, a wood stove, and a table are the only accouterments to the old fish hatchery managers cabin. The paperwork recommends treating the water, but I can’t imagine finding a more pure source. Warm spring gushes a frothy 200 cubic feet of water per second right out the cabin’s back door, flooding into the Warm River.

After dinner, I reach for the rod and take a turn at flicking parachutes into the evening sky, angling to hook a silver bullet. And then in an instant, the sky is obscured by a thick cloud of tiny insects – the hatch of the day – and the water boils in a feeding frenzy. I was finally able to appreciate the bins of flies back at the shop, but still no luck.

The morning air is crisp. After brewing a pot of coffee, I lock the cabin and continue north on the gravel trail over abandoned trestles and through stands of taiga, marshy uplands, and quiet farms. The gravel became looser as the miles pressed on, so I stop occasionally to stalk for trout.

Along the way, I reflected on future opportunities to ride around Yellowstone and the Tetons. I was ready for the bugs (and came around to understand the bears) and came prepared to wrestle trout the size of small farm animals into submission. But what I wasn’t prepared for was the amazing amount of history and spectacular beauty of eastern Idaho.

I take one final peek over the Big Spring bridge, watching schools of fat ‘bows swimming safely in the protected headwaters of the Snake. I shake my head and drive back home with an empty cooler. Bears and fish be damned.

Thanks to all our partners for making this adventure possible!  3T, WTB, BUFF, FIZIK, PEDALED and KOMOOT!