CapoVelo.com
CapoVelo.com - - Mavic Explains How to Get the Right Tire Width with the Right Rim Width
27711
post-template-default,single,single-post,postid-27711,single-format-standard,no_animation 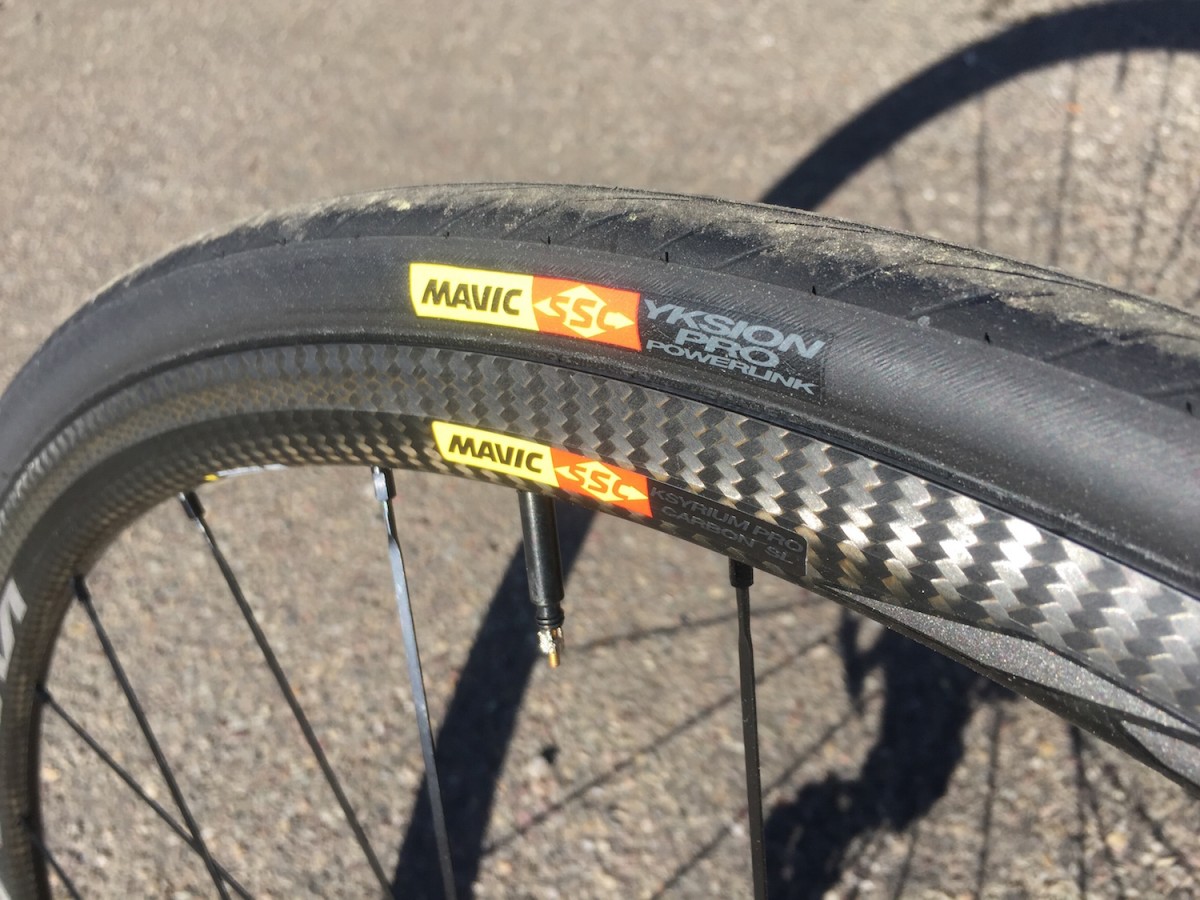 25 Apr 2016
By Campionissimo - In LATEST ARTICLES, THE DOUBLE DIAMOND

Today, we hear a lot about “modern rim shape”. What’s behind this is simply wider rims. Some have succeeded in convincing cyclists that a wide rim makes a better wheel and nowadays, each brand launching a new wheel has to make sure its rims are at least 1mm wider than their competitors.

But what they have forgotten in their equation is the tire. Nobody talks about the shape that the tyre takes when the rim width increases. Nobody talks about what is the right size tyre to put on those wide rims and everybody forgets about safety standards and norms.

So, talking about rim width alone is only doing half the job and it becomes pointless. It’s only when you look at both variables of the equation (tire + rim) that it makes sense. Performance and safety are also at stake.

1. HOW TO MEASURE WIDTH

Rim width is measured at 2 points :

Outer width (A): most often measured at the brake track
Inner width (B): measured inbetween the rim hooks

The outer width (A) will mostly have an influence on the look of the rim, but also on the aerodynamics of the wheel-tire system. But it has zero influence on the comfort, rolling efficiency or tyre shape.

The inner width (B) is the one that defines the tire shape, by pinching its sidewalls. It influences the air volume and tire width.

So, this is really the one measurement we have to look at when discussing rim width to tire width in the respect of rolling efficiency, comfort and air volume.

As we just mentioned, the width (section) of a tire is directly linked to the rim on which it is mounted. It is also linked to the amount of air pressure.

To neutralize those variables, a norm defines how a tyre section should be measured. This norm called ETRTO (European Tire and Rim Technical Organization) has defined all the safety and performance parameters that a tire and rim should respect to be compatible with one another. Although the name says “European”, this organisation’s work is the reference for all international and national norms in the bike industry (ISO, CEN and their national declination).

To measure a tire section, ETRTO has defined:

But at the end of the day, it’s the manufacturer’s responsibility to indicate the right dimension of the tyre and one should always be able to rely on those indications so the tyre choice can be made safely.

2.1 How the tire section influences the rolling resistance and the tyre pressure

To increase your speed for the same effort, the Rolling Resistance Coefficient (Crr) must be as low as possible.
Our measurement shows that the Crr decreases when the tyre pressure increases:

However, the Crr decreases when the tire section increases. The graph bellow shows that at equal tire pressure and rim width, the Crr gap between a 23mm and a 25mm tire (for a given tyre) is about 0.3/1000:

In short, the Crr of a 23mm inflated at 100PSI, is the same as that of a 25mm tire inflated at 80 PSI.
While increasing the tire section, the rolling resistance is maintained, while hugely improving your comfort.
And if your goal is to lower your rolling resistance, you can just go for a wider tire and keep the same riding pressure.

The same would go with even bigger tires (28mm) but then weight and inertia will come into account and there will be a trade off between rolling resistance, low inertia and weight.

2.2 Better ride quality with both wider rims and wider tires

The “ride quality” is influenced by many factors and cannot be reduced to just one single number. It’s more a question of “feeling” and, as such, it is a personal matter and doesn’t have just one universal definition.

However, in most instances, cyclists refer to ride quality in terms of comfort and high “speed to effort” ratio.

The air volume is a good way to look at it.

More air volume means a stronger protection against snakebite, by increasing the distance of the gap between the ground and the rim edge.
As a result tire pressure can be lowered to improve comfort and traction without increasing the chances of pinch flats.

So, how to increase the air volume? Here are few measurements:

For a long time the general thinking was that to be faster a part (let’s say a wheel) had to be narrow to reduce its frontal area. It’s true, but this doesn’t take into account real world conditions where the wind doesn’t always blow right in front of the cyclist.

With deep section rims becoming more and more popular it also became obvious that the ease of handling of such wheels had to be improved.

Doing that, the trailing edge radius gets rounder to the benefit of the wheel’s stability in a crosswind.

The frontal drag (at 0° of yaw angle) becomes higher but at every other yaw angle this design lowers the drag and improves the stability of the wheel.

The graph bellow compares two 40mm wheels fitted with the same 23mm tire. The blue curve is a 19mm wide rim, whereas the pink one is a 25mm wide rim.

The gap is 2,5 Watts in favor of the wide rim, based on our yaw angle weighted law (http://www.engineerstalk.mavic.com/why-weightings-should-be-applied-to-wheel-drag-data-to-measure-aerodynamic-performance/)

But, if you use a 25mm tire on the 25mm wide rim you’ll be back to the blue curve and even higher since the frontal area has become bigger!

So, widening the rim for aero benefits is really efficient as long as the tyre remains narrower than the rim’s widest point.

If you think “I have a wide rim, so I can ride a wide tyre”, that’s true but means that you’ll annihilate the aero benefits of the wide rim. But maybe you’re pursuing another goal, like more comfort or lower rolling resistance…

Tire width and rim width have to be made for each other.

If the tire is too wide relative to the rim width, it will not be well supported by the rim and the ride may feel flimsy. There is also a higher chance of pinch flats.

Equally, if the tyre is too narrow relative to the rim width, it will get a flat shape that is bad for rolling efficiency and ride feel. For a MTB tire this can result in the side knobs constantly coming in contact with the ground even in a straight line. The tire will not deform as it is supposed to and the grip and rolling efficiency is no longer guaranteed.

But most importantly, there is a safety issue.

Some tests performed by several tire manufacturers, including Mavic, have shown that a narrow tire on a wide rim has a higher chance of severely coming off the rim.

Norms are setting barriers and rules to ensure rider safety. ISO 4210 refers to the ETRTO manual that provides a chart to show which combinations are possible and safe :

This chart says for a given tire width (left column) which rim widths can be used (middle column for hookless rims, right column for regular rims).

Example of reading: a 23mm tire can be safely mounted on traditional rims of 13mm to 16mm (internal width). On any rim wider than 16mm, it is not possible to use a 23mm tire safely.

On the other hand, a rim that is 21mm wide internally, can only accept tires from 35mm and above.

This is where Mavic and our Wheel-Tire System helps the rider make the best choice. We deliver our wheels with the tire that perfectly matches the rim in terms of performance, safety and dimensions.